On April 29th, the New York Times reported that the well-known singer Jill Corey had died, on April 3rd, at a Pittsburgh hospital.  She was 85.

In 1953 and 1954, Ms. Corey was one of the stars of The Dave Garroway Show, on NBC-TV.  She was also a cast member of The Johnny Carson Show, Mr. Carson's 1955-1956 weekly prime-time comedy and variety program on CBS.  Ms. Corey appeared, over time, on a number of other television shows--which included, in 1957 and 1958, starring on the NBC-TV program Your Hit Parade.

In early 1957, singer Gisele MacKenzie, who had starred on the Hit Parade since 1953, announced she'd be leaving the program at the end of the 1956-1957 television season, to star on her own NBC show in the fall.  Subsequently, the Hit Parade was revamped, for the the 1957-1958 season.  Longtime stars Dorothy Collins, Snooky Lanson, and Russell Arms were let go, and a new vocal cast took over; bandleader Raymond Scott was also replaced. 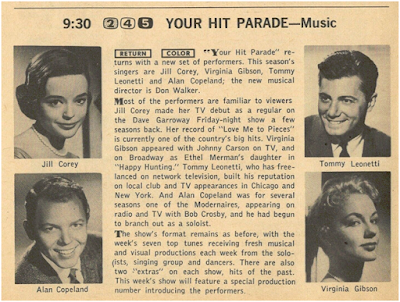 The program's new singing stars, beginning in the fall of 1957, were Ms. Corey, Alan Copeland, Virginia Gibson, and Tommy Leonetti.

The new cast lasted one season.  Later, for part of the 1958-1959 season, the show moved to CBS, and starred Dorothy Collins, and singer Johnny Desmond.  The program then left television--though a new CBS version aired briefly, fifteen years later, in the summer of 1974.

Here is Ms. Corey's obituary, from the New York Times:

(Above image: preview of the new Hit Parade cast, in a 1957 issue of TV Guide; Jill Corey is seen at the top left)