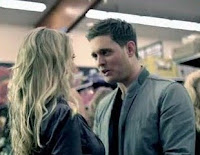 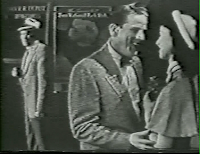 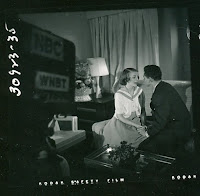 Here’s an enjoyable song (and video), from the very talented singer Michael Buble. The song, “Haven’t Met You Yet” (co-written by Buble), is from his latest CD, “Crazy Love.”

The song and video are enjoyable on their own terms—and there are also a few nice echoes of other performers.

In one of the video’s scenes, Buble passes between musicians dressed in marching band-style outfits. The scene’s trumpet music calls to mind The Beatles’ “Penny Lane.” (And one of the trumpet phrases, too, recalls the Chicago song “Beginnings.”) I also like the video’s dancers—including the moment when (at 2:43, standing in place, arms extended forward), they echo, briefly, Michael Jackson.

Buble’s love interest in the video is Luisana Lopilato, an Argentine singer, actress, and model. (In real life, evidently, the two are a couple.)

If I might, let me draw a particular parallel between this video, and Your Hit Parade (a show which some believe anticipated the era of music video—in that songs, on the TV program, were conjoined with acting, and storytelling). Routinely, during the TV show’s musical productions, a featured singer sang to another performer; the latter performer would act (and react) silently. While watching kinescopes of the program, I have frequently been impressed by the engaging performances of those who acted silently. Similarly, Luisana Lopilato’s role in the Michael Buble video is for the most part one of reacting to Buble. Her performance, like Buble’s, is likeable, and appealing.

Comedian and actor Carl Ballantine passed away on Tuesday, at age 92.
Ballantine is perhaps best-known for playing the character Lester Gruber, on the 1960s TV series McHale's Navy.
Yet he was also well-known, for decades, as “The Amazing Ballantine” (or, “Mr. Ballantine”, or “The Great Ballantine”). He performed magic tricks that did not work.
In the fall of 1950, in this capacity, he made several guest appearances on Kay Kyser’s College of Musical Knowledge, on NBC-TV.
Steve Martin has spoken of his admiration for Carl Ballantine’s work as “The Amazing Ballantine.”
"Carl Ballantine influenced not only myself but a generation of magicians and comedians," he said, in a statement to The Los Angeles Times, after Ballantine’s death.
In January of 2009, Martin was interviewed by Terry Gross, on NPR’s Fresh Air.
TERRY GROSS: So, did you feel like you had kindred spirits in the performance world when you were getting started who had a more, like, conceptual or avant-garde approach to what they were doing like you?
STEVE MARTIN: Well, I'm trying to think. I just respected comedians whether they were or they weren't, you know, from, you know, new or old. Bob Newhart I loved, and George Carlin was hilarious at the time, and Bill Cosby and Richard Pryor. And there was a comedy magician who's still alive, Carl Ballantine, who did an act of all magic tricks that didn't work. And it was, still is, one of the funniest things I've ever seen…
(Photo, above: Carl Ballantine, on McHale's Navy.)
Posted by Andrew Lee Fielding at 7:13 PM