There's a Facebook page that, for some time, I've enjoyed a great deal; it is titled "New England Broadcasting History."

I was delighted to see a nice recent item on the page (Dec. 5th) about my mother: it featured scans of a July, 1960 article about her, from the magazine TV Radio Mirror. At the time, she was the host of a weekly movie program, Cinema 7, on Boston's WNAC-TV (Channel 7). 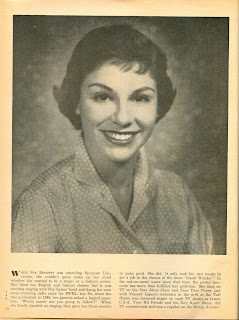 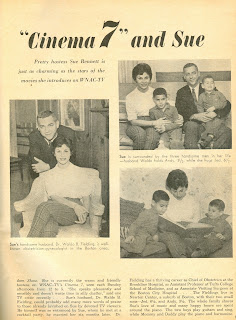 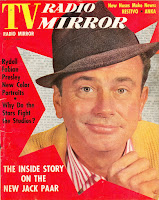 As part of the TV Radio Mirror article, there were pictures of our family. In the top right picture, above, I'm sitting on my father's lap, and my mother is holding my brother. I was four, when the story came out; my brother was seven.

In addition to the mostly national television and radio personalities the magazine covered (Jack Paar was featured on the cover of the July, 1960 issue, as seen here), TV Radio Mirror typically ran a handful of regional stories each month, geared to the different geographic editions of the magazine. The article about my mother appeared in the magazine's "Atlantic Edition." The same issue featured stories about Washington, DC television reporter Morna Campbell, who wrote and delivered a weekday morning newscast on station WTOP ("the only woman news reporter in Washington TV, and one of the few in the country," the article about her noted); host/performer/comedian (and a producer/director) Richard Belkin, of Albany TV station WAST; and New York City's Ted and Rhoda Brown, hosts of the long-running morning program Ted Brown and the Redhead, heard on radio station WMGM-AM.

(Ten years earlier, when my mother was singing on Kay Kyser's television show, on NBC, Ted Brown had been the show's announcer, for its second season. Brown was affiliated with other early television programs, as an announcer and performer--yet is best remembered, certainly, for his work as a New York radio host--which included many years spent at the prominent music station WNEW.)


One of the regular posters/contributors to the New England Broadcasting History Facebook page, Jofus Jones (whose posts I have enjoyed, over time), wrote a response to the item about the TV Radio Mirror article--kindly mentioning this blog, for which I am appreciative.
Posted by Andrew Lee Fielding at 2:51 PM 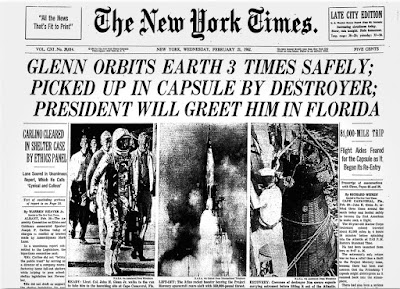 Am saddened to learn about the death of John Glenn.

Wednesday is the 75th anniversary of the attack on the U.S. naval base at Pearl Harbor.

The day after the attack, President Roosevelt's delivered his "date which will live in infamy" speech to a Joint Session of Congress.  He said:  "I ask that the Congress declare that since the unprovoked and dastardly attack by Japan on Sunday, December 7th, 1941, a state of war has existed between the United States and the Japanese Empire."

That day, Congress voted to declare war against Japan.

Here is a video of part of President Roosevelt's speech:

Abraham Lincoln, and the semi-colon

A few days ago I came upon a very enjoyable remark by Abraham Lincoln, from 1864.  Perhaps the quote is well-known, yet I was not familiar with it.

"With educated people, I suppose, punctuation is a matter of rule; with me it is a matter of feeling.  But I must say that I have a great respect for the semi-colon;  it's a very useful little chap."
Posted by Andrew Lee Fielding at 9:27 PM