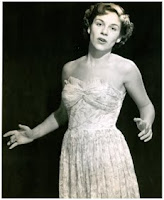 In the early 1970s my parents got a place on Cape Cod. My father still spends time there, and I was recently there for a visit.
While looking through some family things, stored there, I found some items from my mother’s career that I don’t remember seeing before.
There was sheet music, from the time (1948 and 1949) when she had a singing role in a Broadway revue— the show “Small Wonder,” which starred Tom Ewell.
I found a list, in her handwriting; it appeared to be of songs she had sung one week (or, perhaps, was about to sing) on the show Teen Time Tunes, on the Dumont television network. The TV show, fifteen minutes long (a popular time format during early TV), featured my mother and The Alan Logan Trio, and aired weeknights, for part of 1949.
I also found a nice publicity photo of her, which I reproduce here. The picture is not dated, but I believe it is from 1949 or 1950, during the time she sang on Kay Kyser’s TV show on NBC.
Posted by Andrew Lee Fielding at 4:34 PM

Early television, on a movie set 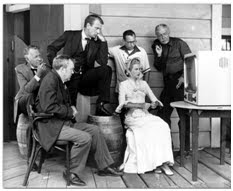 The picture at right was recently posted on philly.com—the website of The Philadelphia Inquirer and The Philadelphia Daily News—as part of a photo feature, concerning film stars from Philadelphia (including Grace Kelly, who appears in the photo).
The photo was taken on the set of the film High Noon, on October 4th, 1951.
In the picture, Grace Kelly, Gary Cooper, and others are watching the television broadcast of the opening game of the 1951 World Series (featuring the New York Yankees and the New York Giants).
In the photo, from left to right: High Noon cast members Otto Kruger, Thomas Mitchell, Gary Cooper, an unidentified member of the studio staff, Grace Kelly and Lon Chaney Jr. (Photo by Charles Handel, Associated Press)
Posted by Andrew Lee Fielding at 8:34 PM 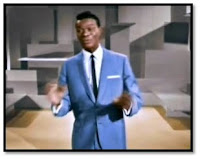 This February 15th will mark the 45th anniversary of the death of Nat King Cole. He died in 1965, a month before his 46th birthday.
Here’s a video of Cole, singing one of his best-known songs, “Mona Lisa”; it was a hit record in 1950. I don’t know what year the video is from, but Cole’s performance of the song (as is typical of his performances) is quite beautiful.
http://www.youtube.com/watch?v=0M3uR24_V10
Cole had another hit in 1950, with the song “Orange Colored Sky”; he was accompanied, on the record, by Stan Kenton’s orchestra. Here’s the recording, via YouTube:
http://www.youtube.com/watch?v=l-6QknAOsVo&feature=related
Musician and bandleader Milton DeLugg (about whom I’ve written previously, in this space, and who is interviewed in my book) co-wrote “Orange Colored Sky” (with Willie Stein).
In 1950, DeLugg was the bandleader on (and was well-known for playing the accordion on) network TV’s first late-night hit show, Broadway Open House. He played “Orange Colored Sky” regularly on the program.
The star of Broadway Open House, comedian Jerry Lester, recorded a version of the song, prior to the recording made famous by Nat King Cole and Stan Kenton. A version was also recorded by Betty Hutton.
In their book, The Complete Directory to Prime Time Network and Cable TV Shows (Ballantine Books, several editions), authors Tim Brooks and Earle Marsh write that DeLugg’s frequent performances of “Orange Colored Sky,” on Broadway Open House, led to this distinction: that it was “probably the first song ever to become a hit through television exposure.”
Posted by Andrew Lee Fielding at 8:20 PM