Walter Cronkite, and the death of Lyndon Johnson

The following video is from a telecast of the CBS Evening News with Walter Cronkite.  It took place on January 22, 1973, 48 years and one week ago.

I will note that I was watching the newscast that evening, in our family kitchen in suburban Boston. What took place, in the 1973 broadcast, was, I remember, startling and dramatic to see (it remains so, at least for me, when viewed today).  It was dramatic not solely because of what was learned--that former President Lyndon Johnson had died in Texas, at age 64--but because of how the news was transmitted.

As the video, below, begins--in mid-newscast--Mr. Cronkite is seen at his desk in the CBS studio.  I read some time ago--I do not remember this, from watching the telecast in 1973--that a filmed report had been airing, yet the report was interrupted. When Mr. Cronkite appears on the screen, however, he initially does not speak--and for a moment, indeed, is not looking in the direction of the camera.  Instead, he is on the telephone.  He then looks at the camera, and holds up a finger, as if to say, to his viewers:  hold on, I'll be with you shortly.

It was gripping--this unexpected silence, and this odd (and for a moment, mysterious) interruption. One would learn, seconds later, about Johnson's death, and that Cronkite was speaking with one of the former president's aides--whose voice, one notes, was not heard during the phone call.

The video becomes, in essence, a brief portrait of a journalist at work.  Mr. Cronkite describes that which he has learned, during the telephone call.  He asks follow-up questions, on the phone, and there is then further silence--silence which feels markedly unusual, in the context of a news broadcast--as he takes in additional details about Mr. Johnson's passing.

Let me also note the following:  while most people, I suspect, will not recall the specific date of Lyndon Johnson's death, I am sure there are many, today, who remember January 22, 1973 for a far different reason. Another event--quite dramatic--occurred earlier in the day, and reporting about it took place at the beginning of Mr. Cronkite's newscast that evening, before he learned of Mr. Johnson's death. That same day, the U.S. Supreme Court issued its landmark 7-2 decision, in the case of Roe versus Wade.

They were there to pay tribute to those who have died from Covid-19 during the past year.  Earlier in the day, the number of Covid-related deaths in the U.S. passed 400,000.  By late evening, more than 401,500 deaths would be recorded.

The commemoration--which took place in front of the Lincoln Memorial's Reflecting Pool--was brief, and very moving. 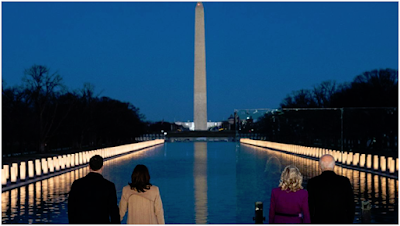 President-elect Biden said, "To heal, we must remember.  It's hard sometimes to remember, but that's how we heal. It's important to do that as a nation. That's why we're here today."

As Mr. Biden finished speaking, four hundred lights, behind him--at the lengthwise sides of the Reflecting Pool (each light representing one thousand of those who have died during the pandemic)--were illuminated. The sight--of the lights, of the reflections of the lights on the water, and the Washington Monument in the distance--was striking, and beautiful.

I don't think there could have been a more meaningful preface to the beginning of the new administration.

Wyoming Congresswoman Liz Cheney: "I will vote to impeach the President"

From the statement, today, by Rep. Liz Cheney, the 3rd-highest ranking Republican in Congress:

"Much more will become clear in coming days and weeks, but what we know now is enough. The President of the United States summoned this mob, assembled the mob, and lit the flame of this attack. Everything that followed was his doing. None of this would have happened without the President. The President could have immediately and forcefully intervened to stop the violence. He did not. There has never been a greater betrayal by a President of the United States of his office and his oath to the Constitution
"I will vote to impeach the President."
https://www.politico.com/f/?id=00000176-f8dc-d367-a17e-fefc40700000
Posted by Andrew Lee Fielding at 8:19 PM

"Six hours of paralysis: Inside Trump’s failure to act after a mob stormed the Capitol"

The story, below, is by Washington Post reporters Ashley Parker, Josh Dawsey, and Philip Rucker.  It appeared on the newspaper's website Monday night.

The report includes this:

(A)s senators and House members trapped inside the U.S. Capitol on Wednesday begged for immediate help during the siege, they struggled to get through to the president, who — safely ensconced in the West Wing — was too busy watching fiery TV images of the crisis unfolding around them to act or even bother to hear their pleas.

Also from the story:

“It took him awhile to appreciate the gravity of the situation,” [Senator Lindsey] Graham said in an interview. “The president saw these people as allies in his journey and sympathetic to the idea that the election was stolen.”

The man who vowed to be a president of law and order failed to enforce the law or restore order. The man who has always seen himself as the protector of uniformed police sat idly by as Capitol Police officers were outnumbered, outmaneuvered, trampled on — and in one case, killed. And the man who had long craved the power of the presidency abdicated many of the responsibilities of the commander in chief, even having to be prodded into belatedly calling up reinforcements from the National Guard.

One of the writers of the story, Mr. Rucker, along with Post reporter Carol Leonnig, wrote the excellent book A Very Stable Genius: Donald J. Trump's Testing of America (Penguin Press, January, 2020).

From columnist George Will

The essay by Mr. Will--titled "Trump, Hawley and Cruz will each wear the scarlet ‘S’ of a seditionist"--is from The Washington Post.  It appeared on the Post's website Wednesday evening.

President Trump is a deeply disturbed and uniquely dangerous man.

Conservatives, moderates, and liberals alike have called for him to resign, following the assault on the Capitol.  Those suggesting resignation include the editorial board of the conservative Wall Street Journal.  President Trump should take this advice.

The final five episodes of Jeopardy! that Alex Trebek hosted are airing this week.