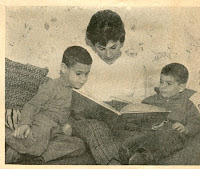 To the right: A photograph from a July, 1960 magazine article about my mother. At the time—this being several years after the end of her network TV career—she was the host of a Sunday afternoon movie program on Boston’s Channel 7 (WNAC-TV), called Cinema 7. My brother is to the left; I am to the right. At the time the magazine story came out, I was four; my brother was seven (although I believe the picture was taken the year before, in 1959).
Posted by Andrew Lee Fielding at 11:20 PM 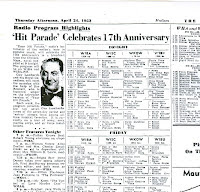 In 1951, when my mother joined the cast of Your Hit Parade, on NBC (at first, to sing in the TV show’s Lucky Strike commercials—known as “extravaganza” commercials, in that they were presented as full production numbers—and then, later, becoming a featured vocalist on the program), the radio and TV versions of the show were both broadcast on Saturday nights. The radio show was broadcast first, and then the same singers, an hour after the conclusion of the radio show, appeared on the television version.
In the fall of 1951, the radio show was altered: it no longer featured the TV cast, and it was moved to Thursday nights. The new radio version, still sponsored by Lucky Strike cigarettes, starred the Guy Lombardo Orchestra; the TV orchestra continued to be led by bandleader Raymond Scott. Each week, on the new radio version, a guest female vocalist—the show’s “Lucky Star of the Week”—was featured. In 1952, my mother made two guest appearances on the radio show.
Seen here: an article from a Madison, Wisconsin newspaper, about one of those appearances. The program, that night, celebrated the radio show’s 17th anniversary.
Posted by Andrew Lee Fielding at 5:27 PM 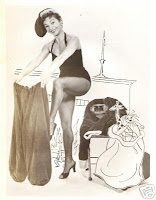 Someone on ebay is selling this 1953 picture of dancer Diane Sinclair, taken at the time she was appearing on NBC's Dave Garroway Show, with her dance partner Ken Spaulding.
Sinclair and Spaulding were the featured dance team on Kay Kyser's NBC-TV show; they joined the show in 1950. Interviews with both Diane Sinclair, and the late Ken Spaulding, appear in The Lucky Strike Papers.
In 1954, Diane Sinclair was featured on the cover of Life Magazine, as part of a photo-essay about Sinclair and Spaulding. The photographer for both the photo-essay, and the cover, was Gordon Parks.
Here's the link, for the ebay item:
http://cgi.ebay.com/DIANE-SINCLAIR-PHOTO-TV-ENTERTAINMENT-DANCER-VINTAGE_W0QQitemZ110237945481QQihZ001QQcategoryZ197QQrdZ1QQssPageNameZWD1VQQcmdZViewItemQQ_trksidZp1638Q2em118Q2el1247