I have a book, from a series published in the 1990s by Warner Books, called You Must Remember This; the edition I have focuses on 1956, the year I was born. The book was a gift from a friend, in 1995.
She did not realize, when she gave it to me, that the picture on the book’s inside cover was of the stars of TV’s Your Hit Parade, shown celebrating the new year of 1956. From the top, clockwise, are Snooky Lanson, Gisele MacKenzie, Russell Arms, and Dorothy Collins.
Of the various singers who appeared on the television version of the Hit Parade, Lanson, MacKenzie, Arms, and Collins remain, today, the singers who are most identified with the program.
Posted by Andrew Lee Fielding at 6:05 PM

A nice picture of Kay Kyser, holding an NBC Radio microphone, was up for auction this week on ebay.  The picture was taken by photographer Elmer Holloway. 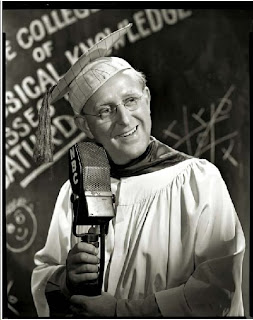 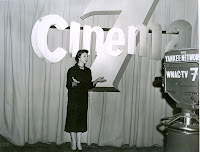 For a few years (the late 1950s, into the start of the 1960s), my mother was the host of a Sunday afternoon movie program on Boston's WNAC-TV (Channel 7).  The show was called Cinema 7.
Posted by Andrew Lee Fielding at 10:41 PM 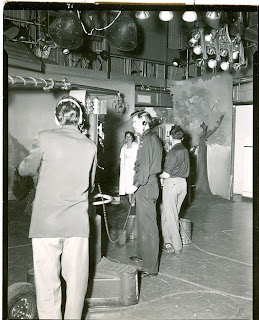 A 1954 rehearsal photograph, from my mother's 1954-1955 weekly musical show on Boston's WBZ-TV (Channel 4).  She can be seen in the distance, near the center of the photograph.
Posted by Andrew Lee Fielding at 9:59 PM 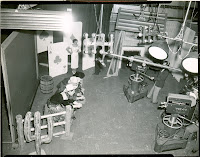 Here are a couple of pictures from my mother’s 1954-1955 television program, The Sue Bennett Show, a program I have referred to previously in this space. The show aired weekly on Boston's WBZ-TV, and featured my mother’s singing, and the singing of a vocal group, The Freddy Guerra Trio.
The pictures here are rehearsal photographs, from 1954. The first shows The Freddy Guerra Trio, at the left of the picture (singers Joe McPherson, Freddy Guerra, and Charles Bean); my mother stands nearby.  The second picture gives a closer view of the trio. 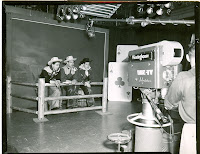