I've written a number of times, in this space, about author and researcher Martin Grams, Jr.  He's written many books about Old-Time Radio shows, and vintage television programs. (One of his best-known books is 2008's The Twilight Zone: Unlocking the Door to a Television Classic.)

Martin has appeared several times on my weekly radio program; one of those appearances was this past week.  It's always a pleasure speaking with him.

We talked about his forthcoming book about the well-known radio program Duffy's Tavern (which also aired, briefly, on television); the book will be released later this year.

We also discussed the upcoming "Mid-Atlantic Nostalgia Convention," which is overseen by Martin and his wife Michelle.

The convention is in its eighth year, and will take place from September 19-21, in Hunt Valley, Maryland.

www.martingrams.com
Posted by Andrew Lee Fielding at 11:48 AM

"Walk Right In," "The Rooftop Singers," Bill Svanoe, and the Freedom Riders

This is a 1960s video (of a television performance), featuring one of the songs I enjoyed most in childhood. It remains a favorite song, today.

The song, "Walk Right In," was recorded in 1962 by The Rooftop Singers, and was a number one hit in early 1963. The song had originally been written in 1929 by the blues musician Gus Cannon (who released a recording the same year, with a jug band he led). The Rooftop Singers was formed in 1962, in order to record a new version of the song.

The performers in the video (left to right) are Bill Svanoe, Lynne Taylor, and Erik Darling.

And here is the Wikipedia page about the group:

Here, too, are pictures of Bill Svanoe, from 1961 (before the forming of The Rooftop Singers), as well as a more recent picture.  He was part of the very brave and heroic 1960s Freedom Riders movement and he was arrested and jailed as a result.  The pictures appeared on Oprah Winfrey's website in 2011, as part of a "Then and Now" feature about the Freedom Riders; Ms. Winfrey also honored the Freedom Riders in a 2011 broadcast. (Please scroll down, after clicking on the link, to see the pictures of Mr. Svanoe.)

The feature on Ms. Winfrey's website was derived from a 2008 book about the Freedom Riders, Breach of Peace.  The book is by photographer and author Eric Etheridge:

Lastly, this is the link for the Wikipedia page about the Freedom Riders: 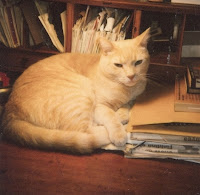 This is a picture of Rocky, taken years ago, when I lived in Charlottesville, Virginia. I found Rocky in 1996, at the Charlottesville-Albemarle County SPCA. When he died, a year ago yesterday, he was sixteen. I loved him dearly, and miss him very much.
Posted by Andrew Lee Fielding at 8:56 PM