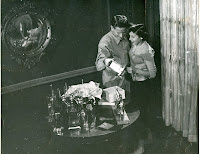 Here's a 1951 photograph (not included in my book), of Snooky Lanson, and my mother, Sue Bennett, singing the song "Because of You," on NBC's Your Hit Parade.
Posted by Andrew Lee Fielding at 7:27 PM 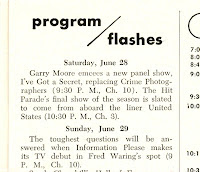 An item in Philadelphia's TV Digest magazine, for the week of June 28, 1952: it noted that the last episode of NBC's Your Hit Parade, for the 1951-1952 TV season, would be originating, on June 28th, from the new luxury ocean liner, the S.S. United States. The ships's maiden voyage--from New York, to England--was five days away.

Seen here: Kay Kyser, star of the NBC television program Kay Kyser's College of Musical Knowledge, with daughters Kimberly and Carroll, on the cover of the June 17, 1950 issue of Philadelphia's TV Digest magazine.

Kyser had just been named "Television Father of the Year" by the "National Father's Day Committee."

A detailed portrait of Kay Kyser's 1949-1950 TV show, and a portrait of Kyser himself, make up a significant part of The Lucky Strike Papers.
Posted by Andrew Lee Fielding at 6:56 PM

Another view, the S.S. United States 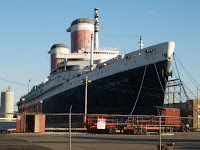 Here is another view of the S.S. United States, photographed on the Philadelphia waterfront, Jan. 20, 2008.

I'm delighted by a review on cashboxmagazine.com, posted 1/15/08, which gives The Lucky Strike Papers five stars.

Says the review: "The Lucky Strike Papers is a must read for anyone wanting...insights [into] early American television."
Posted by Andrew Lee Fielding at 2:41 PM

Ron, an old friend, is a sensational radio host; he was previously the host of daily talk shows on stations in Washington, DC, Philadelphia, and San Antonio. His primary work, today, is as Executive Director of San Antonio's Animal Defense League; he joined the group in August of 2007. The group's web site is: http://www.adltexas.org/.