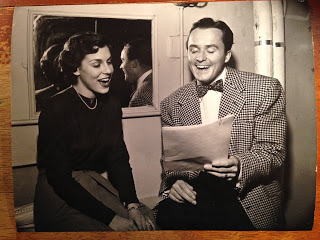 This is a photograph I recently acquired.  It is, evidently, from late 1949.

The picture is of my mother, Sue Bennett, and Michael Douglas (later known as Mike Douglas), in a publicity photo for Kay Kyser's TV program; they were featured singers on the show, for both seasons of the program.  The picture was taken at New York's International Theatre, at Columbus Circle; the show was telecast from the theatre.

The Kay Kyser show made its debut on NBC-TV, at the start of December, 1949.  Its first season continued until late June of 1950, and the program then returned for its second season in early October, 1950; the show went off the air at the end of December, 1950.  With the end of his TV program, Kay Kyser retired from show business.

Moe Howard and The Three Stooges

I enjoyed finding out about/reading about this: a five-day auction, taking place from June 24-June 28, featuring items from "The Personal Collection of Moe Howard."

The event is being held by Nate D. Sanders Auctions, of Los Angeles. 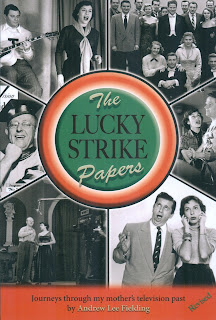 Beginning in the next day or so, for a limited time, the book will be available, at my website, for $22.95 (with Media Mail Shipping included).  Please see the link below.

Ralph Ellison's Invisible Man (1952) is one of the great works of American literature. In 1999, five years after Mr. Ellison died, at age 80, his novel Juneteenth was released. He had worked on the novel for decades, yet it remained unfinished at his death. His literary executor, John F. Callahan, a professor at Lewis & Clark College, assembled the book from some two thousand pages of manuscript and notes Mr. Ellison had written.

In 2010, a much longer version of the novel--Three Days Before the Shooting--was published. The book, made up of more than one thousand of the two thousand pages of material Mr. Ellison had left behind, was edited by Mr. Callahan, and writer/critic Adam Bradley, professor at the University of Colorado, Boulder.

As noted on Wikipedia: "Texas was the most remote of the slave states, and the Emancipation Proclamation of January 1, 1863, was not enforced there until after the Confederacy collapsed." Says Wikipedia: "On June 18, Union Army General Gordon Granger arrived at Galveston Island with 2,000 federal troops to occupy Texas on behalf of the federal government. The following day, standing on the balcony of Galveston's Ashton Villa, Granger read aloud the contents of  'General Order No. 3', announcing the total emancipation of those held as slaves."

Here is a story from CNN.com, today, about observances of Juneteenth. Pennsylvania, today, became the latest state to officially recognize the holiday; four states have yet to do so. 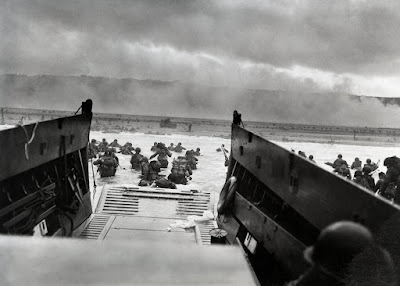 (Please note: one gets a far better sense of the photograph, when viewed in its enlarged form; one can see the larger image at the link, below, or by clicking on the image, above.)

The picture accompanies a story (in this coming Sunday's Times Magazine) about the journalist Ernie Pyle, who covered the Allied landing. The Times story notes: "On D-Day, as the invasion force fought for the beach, Pyle was trapped just offshore, on a ship transporting tanks...[He] wasn’t allowed to go ashore at Omaha Beach until the morning after."

“The advantages were all theirs,” Pyle said of the German defenders: concrete gun emplacements and hidden machine-gun nests “with crossfire taking in every inch of the beach,” immense V-shaped ditches, buried mines, barbed wire, “whole fields of evil devices under the water to catch our boats” and “four men on shore for every three men we had approaching the shore.” “And yet,” Pyle concluded, “we got on.”

More than 4400 Allied troops, it is estimated, died on June 6th--American, British, Canadian. Approximately 2500 of those who died were Americans.

Ernie Pyle died the following April, on Okinawa, killed by enemy gunfire. He had accompanied the Marines, as they landed and then fought there.