The Monkees released a great many wonderful pop songs, in the 1960s. 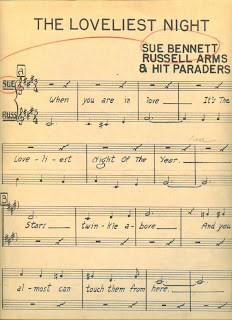 To the left is the first page of a vocal score, for a 1951 telecast of Your Hit Parade, on NBC. The score was for the song "The Loveliest Night of the Year"; my mother and singer Russell Arms, about whom I wrote in the previous post, performed the song, along with the show's choral group, the Hit Paraders.

Singer and actor Russell Arms, I was sorry to learn, died this past Monday, at his home in Illinois. He was 92, and is survived by his wife, Mary Lynne. Mr. Arms is best known for his work on TV’s Your Hit Parade. He was one of the show’s primary stars from 1952 to 1957.


I had a very enjoyable conversation with Mr. Arms, in 1981; at the time, he was living in the Los Angeles area. He was extremely gracious, in welcoming me into his home, and lengthy excerpts of the interview appear in my book about early television.
Here is an obituary, from The Los Angeles Times:
http://www.latimes.com/news/obituaries/la-me-passings-20120216,0,3171070.story

Here, too, is the amazon link to Mr. Arms's 2005 memoir, My Hit Parade...and a Few Misses.  The book was published by BearManor Media.