For years, I've taken pleasure in reading a particular blog--the "Geezer Music Club," written by Steve Albin, who, on the blog, went by the name BG (a/k/a "Big Geez").

He wrote, in an enjoyable, easygoing manner, about music and music history--about songs, singers, musicians, songwriters, music groups.  He also wrote about other nostalgia-related subjects.

In 2015, he stepped away from the blog, taking what he called "an indefinite hiatus." Later the same year, he released a book, derived from the blog, called Memories & Music.

In the book's preface, he wrote:

"As you might guess from the name [of the blog] it was music-oriented, but it was always intended to have a lot of nostalgia as part of its content. After all those years of writing it, I finally came to realize that it included a treasure trove of nostalgia of a specific kind – personal memories that reach back to my childhood and paint a picture of middle America in the second half of the twentieth century. That being the case, I thought I might be able to use those blog posts as the basis for a memoir that might offer readers a little more than just being about me.

"So I've now taken many of those blog entries and transformed them into chapters. Since the GMC was a music blog there is still a lot of that type of content, but I have edited the original posts so that the emphasis is definitely on nostalgia. (Of course, you might find the stuff about music interesting if you give it a chance.)"

During his hiatus from the blog, there were occasional brief posts, to touch base with his readers.  In late 2017, the hiatus ended; he resumed posting regularly.  Several months later, however, due to a heart attack, and then heart surgery, he took a leave of a few months. He then returned to the blog for a time, yet other serious health issues arose, necessitating another leave.  By April of 2019, he was again posting often; his last post appeared on September 19th.

On October 8th, his family let his community of readers know that he had died the week before.  At his death, on October 3rd, he was 75.

Steve, who lived in Indiana (he grew up in the Terre Haute area), was born in 1943, in Illinois; tomorrow, November 23rd, would have been his 76th birthday. His full name was Stephen Foster Albin; his father, he had noted on the blog, named him after the 19th century songwriter, often referred to as the "father of American music."

In 2008, I sent Steve a copy of my book about early television, and he subsequently wrote a kind review of it.  Later, we became friends--communicating, over time (warmly, enjoyably), via e-mail.

I'm very saddened by his death.  And (as I am sure is the case with his many readers) I'll miss encountering, on the blog, his ongoing reflections, enthusiasms, reminiscences, and good cheer.
Posted by Andrew Lee Fielding at 11:24 AM 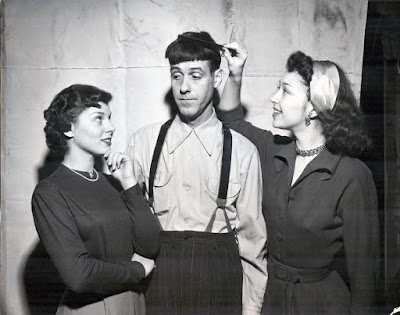 I recently acquired the above 1949 photograph, of three of the performers from bandleader Kay Kyser's television show, the College of Musical Knowledge.


The photograph appeared in an article in TeleVision Guide magazine, at the start of 1950.  Mr. Kyser appeared on the magazine's cover that week.  Images from the issue appear below.

Robert Freeman, and "Meet the Beatles!" 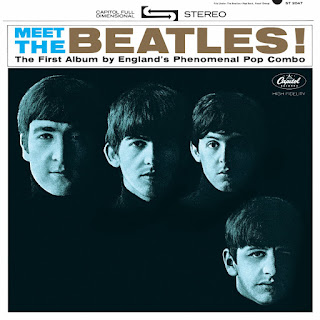 Photographer Robert Freeman, who took the legendary picture which appeared on the cover of Meet The Beatles!, died on November 8th, at 82.  Mr. Freeman also took the photographs for the covers of other Beatles albums, including Rubber Soul.

Meet The Beatles! was released in the United States in January of 1964, on Capitol Records.

The photograph by Mr. Freeman had previously been used--absent the blue tint seen on Meet the Beatles!--on the cover of the UK album With the Beatles, which had come out, on the Parlophone label, a couple of months prior to Meet the Beatles!  (I had never known until today, while reading about With the Beatles, that the album had been released in the UK on November 22, 1963, the day of the Kennedy assassination.) 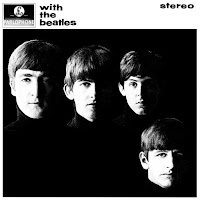 With the Beatles featured a number of the songs which would later be heard on Meet the Beatles!, but also included several cover recordings (such as "Roll Over Beethoven," and "You Really Got a Hold on Me") which would appear on the April, 1964 American release, The Beatles' Second Album.

Although the cover of Meet the Beatles! asserts that it is "The First Album by England's Phenomenal Pop Combo," it was, technically (though just barely), the second album released in America by the Fab Four;  Introducing the Beatles, on Vee-Jay Records, was brought out in the U.S. ten days prior to the release of Meet the Beatles!  (In addition, the group's first studio album, Please Please Me, had been released in the UK, by Parlophone, in March of 1963.)

Here is an obituary of Robert Freeman, from the New York Times:

Richard "Dixie" Tourangeau is a regular guest of talk host Morgan White, Jr., on The Morgan Show (weekend overnights, Boston's WBZ-AM, 1030 AM); you'll perhaps recall that I've written about The Morgan Show, in this space, on a number of occasions.

The weekend shows begin at midnight, and Tourangeau, tonight, is appearing on the program from midnight until 2 a.m. The discussion, at least in part, will concern the recently-concluded World Series.

Tourangeau--an enjoyable and knowledgeable radio guest--is a baseball researcher and historian. He's a longtime member of the Society for American Baseball Research.

A 2007 article about Tourangeau, in the Worcester (MA) Telegram, included the following: "He seems to know everything there is to know about every baseball player who ever wore a Major League uniform..."

In his appearances on The Morgan Show, Tourangeau (whom I've come to know, due to my own affiliation with Morgan's program) also discusses, periodically, the subject of National Parks. For nearly three decades, he worked, in Boston, for the National Park Service. For the last fourteen years of his NPS career, he was a ranger, at Boston National Historic Park (which includes Charlestown's Bunker Hill Monument). While now retired from the NPS, he continues, on a volunteer basis, to lead tours of the USS Cassin Young, at the Charlestown Navy Yard (which is also part of Boston National Historic Park); the warship was built, and first deployed, during World War II. (By the way: the last tours of the season, for the ship, take place this Monday, Veterans Day.)

Tourangeau, one therefore notes, is well-versed regarding two types of parks: national parks, and baseball parks.  To date, he told me in an e-mail, he has visited about half of the some 420 National Park Service sites in the United States.  He has also visited all of the current parks of Major League Baseball.
Posted by Andrew Lee Fielding at 9:25 PM

The following is a quote from the novelist Attica Locke, from an interview with her which appeared in the September 1st issue of The New York Times Book Review. (I confess that I have not, as of this writing, read Ms. Locke's work.)

The quote, which I think is very nice, is from the Book Review's weekly feature about books and reading, "By the Book." 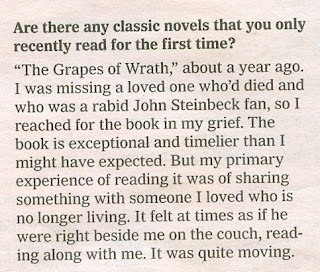