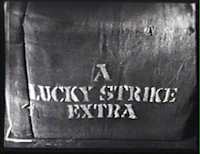 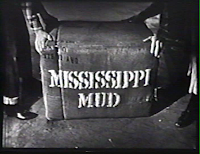 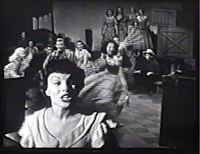 A few additional pictures--from a September, 1951 telecast of Your Hit Parade. The song "Mississippi Mud" was, during this telecast, a "Lucky Strike Extra." Lucky Strike Extras, featured on each program, were songs which were not hits, at the time, but were previously popular, perhaps standards.
Picture # 3 shows my mother singing the song. Directly behind her are the Hit Parade dancers (including Bobby Trelease, Lenny Claret and Virginia Conwell), and, standing in the distance, members of the Hit Paraders vocal chorus.
Posted by Andrew Lee Fielding at 3:09 PM

Pictures from a DVD 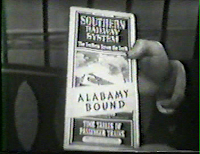 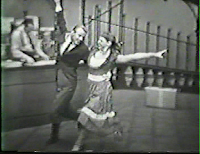 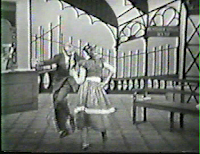 Yesterday, I copied a DVD to my computer, of segments from telecasts of shows profiled in my book: Your Hit Parade, The Freddy Martin Show, and the one segment of Kay Kyser’s TV show that I have (it is a five-minute segment of the hour-long program, purchased on ebay several years ago; I have no idea why only a five-minute portion of the program was offered for sale). The DVD was made from videotapes I have; the videotapes were originally made from kinescopes (although some of the tapes I have were no doubt made from other tapes, and not directly from kinescopes).

One of the features of the DVD viewing program, on my computer, is that one can take snapshots of the video images.

Here are a few from Your Hit Parade. (The quality of the videotape from which these particular images came was obviously less-than-ideal.)

They are from 1951, of guest dancers Fosse & Niles--Bob Fosse (later the acclaimed stage and film choreographer and director), and his dance partner (and then-wife) Mary Ann Niles. They appeared regularly on Your Hit Parade, as guest dancers, during the 1950-1951 TV season. Here, they’re dancing to the song “Alabamy Bound.” The scene takes place in a train station; it is Fosse who is holding the train schedule, seen during the introduction to the song, which showed TV viewers the song title; the ways in which song titles were revealed to viewers was one of the signature features of the Hit Parade. (Video images courtesy of Lost Gold Entertainment, Inc.)
Posted by Andrew Lee Fielding at 12:47 PM

I have a scrapbook from childhood. Contained within it is a page of autographs from a 1965 broadcast of The Mike Douglas Show.
(I began collecting autographs in 1964, when I was eight; this was not long after the death of President Kennedy. Over time I wrote to various politicians and government figures, and also certain baseball players, asking for signed photos. Adlai Stevenson sent me one, as did Richard Nixon; Nixon was, at the time, a lawyer. I also received pictures from several U.S. Senators—and from Sandy Koufax, Hank Aaron, Bob Feller, and Roy Campanella. This hobby lasted for several years.)
In 1965, The Mike Douglas Show came to Boston for a week, broadcast live from the city’s War Memorial Auditorium. The co-host for the week was actor Pat O’Brien. My parents were guests on one of the broadcasts.
They appeared on a number of Mike Douglas’s programs during the 1960s, beginning in 1962, when the show was seen only in Cleveland. In 1962, my father, an obstetrician and gynecologist, had co-written (with my aunt, who at the time was a journalist), a book about childbirth, and as a result was scheduled to appear on the program. When Douglas learned my father was to be a guest, he asked that my mother appear on the show as well; my mother and Douglas had both been featured singers on Kay Kyser’s NBC-TV show in 1949 and 1950, and had not seen one another since. After their 1962 Cleveland appearance, my parents then appeared on Douglas’s program periodically over the next several years.
In that the 1965 telecast at the War Memorial Auditorium took place not far from our suburban Boston home, I went to the show, with my brother and my maternal grandparents.
After the program ended, I was given autographs by Mike Douglas, Pat O’Brien, and singer Frankie Laine—though I do not recall meeting any of them. I do remember meeting Jayne Mansfield, another guest on the show that day, though the memory is a vague one. I simply recall standing next to her, and remember that she gave me a black and white photograph of herself.
The autograph she gave me can be seen above.
Posted by Andrew Lee Fielding at 8:33 PM