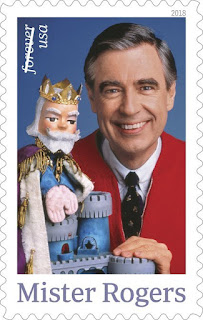 Fred Rogers is one of the great figures in television history. His remarkable children's program--a gentle, meaningful and beautiful show--began airing nationally fifty years ago.

On March 23rd, the United States Postal Service will be releasing a "Mister Rogers" stamp.  It is a much-deserved honor.

A ceremony will be held by the Postal Service, on the 23rd, at Pittsburgh public station WQED-TV, the station from which, for decades, the show originated.

The last first-run episodes of Mister Rogers' Neighborhood
were taped at the end of 2000, and broadcast in 2001. The program continued to air on PBS for several more years. It is still aired by some PBS stations; some of the stations carry the show on weekends.

Here is a New York Times story about the stamp, from February:

For some time I've had a copy of William Gibson's 1984 science fiction work Neuromancer, but haven't read it.  I recently took it off the shelf, and loved its opening sentence:

The sky above the port was the color of television, tuned to a dead channel.
Posted by Andrew Lee Fielding at 10:48 PM