"It Should Happen to You," and NBC's International Theatre 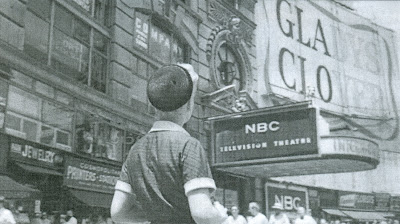 This is an image from the enjoyable 1954 film It Should Happen to You, which starred Judy Holliday and Jack Lemmon. The film was directed by George Cukor.

The image is of Judy Holliday's character, Gladys Glover, in New York City's Columbus Circle. (In the scene, a billboard featuring her name is being painted; she discovers that her surname has been misspelled.)

Yet this is why I am most interested in the image:  in front of Ms. Holliday is the marquee of NBC's International Theatre.  The theatre, which I have written about previously in this space, was the home of a number of NBC-TV programs during television's early years--including Sid Caesar's Your Show of Shows.  (In 1949 and 1950, my mother sang at the theatre, as one of the cast members of bandleader Kay Kyser's weekly TV program.)

I found out, in 2011 (via a 2006 newspaper article reproduced on the website of entertainer and writer Brian Gari), that the theatre was seen in It Should Happen to You.  (Here is the link for the article: http://briangari.com/nytimes.html. )

The article, from The New York Times, featured an interview with Gari, and in part concerned his late grandfather, Eddie Cantor, who had performed at the International Theatre in 1950 and 1951, when he was starring on NBC's Colgate Comedy Hour.  The show left the theatre, and was moved to California, not long after the start of the 1951-1952 television season.

The theatre was torn down in 1954, the year It Should Happen to You was released.

(It Should Happen to You image, copyright 1954, Columbia Pictures; 2004 DVD release by Sony Pictures Home Entertainment)
Posted by Andrew Lee Fielding at 5:25 PM