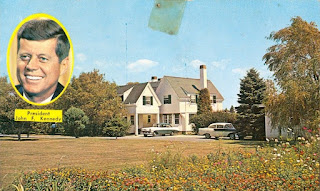 It is startling to realize that had JFK lived, he would, this week, have turned ninety-five years old.

(Above:  a postcard of the Kennedy home in Hyannisport, Massachusetts.  I got the postcard in the 1960s, during childhood.)
Posted by Andrew Lee Fielding at 10:40 PM 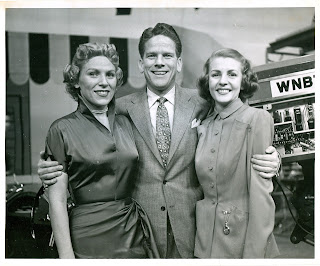 I recently bought this very nice photo, on ebay. It's of the primary singing stars of the NBC television show Your Hit Parade, from 1950 to 1952:  Eileen Wilson, Snooky Lanson, and Dorothy Collins.  (The picture, unfortunately, has a number of dust spots--seen as white specks--on it.)

After the 1951-1952 TV season, Eileen Wilson left the program; she was replaced by singer June Valli.

In the background of the picture, there is a television camera, with its side panel opened up.  At the time, the television cameras for New York-based NBC programs routinely displayed two labels:  "WNBT," and, beneath that, "NBC."  WNBT was the local New York NBC station; its name was later changed to WNBC.
Posted by Andrew Lee Fielding at 2:48 PM

As noted in the prior post (about a photograph of Your Hit Parade, from 1950 or 1951), singer Marilyn Jackson (seen in the Hit Parade picture) was, at the time, one of The Ray Charles Singers, on Perry Como’s television show.

Here is a video (from a kinescope) of Perry Como, with The Ray Charles Singers (including Marilyn Jackson, seen in the image below), from 1954. They are singing Como’s hit song, from that year, “Papa Loves Mambo.” I posted the same video, in this space, a couple of years ago. 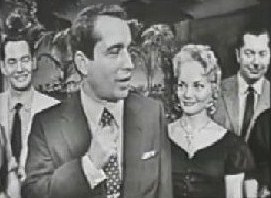 As I mentioned, in the 2010 post, a particularly interesting (and enjoyable) part of the 1954 performance is this: that at the conclusion of the song (which took place at the end of that night’s telecast), there was time left over. Como and The Ray Charles Singers improvised, and sang part of the song again.

(Above image: Marilyn Jackson, next to Perry Como, on Como's television program, 1954.) 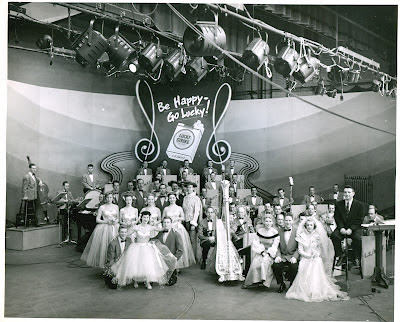 I recently bought this picture on ebay. It is of the cast and musicians of Your Hit Parade, and appears to be from 1950 (the year the show came to television), or the start of 1951. (Neither singer Russell Arms, nor my mother, are pictured.  My mother joined the cast of the program in late February of 1951; I believe Russell Arms joined the show's cast earlier the same month.) 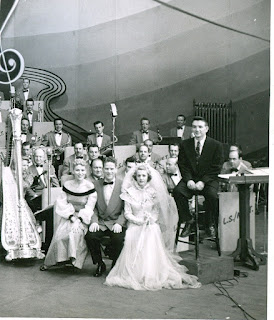 Here are some of the people in the photograph:

To the right of the picture, in the foreground (see enlarged section, at left), are the primary singing stars of the program, from 1950 to 1952: Eileen Wilson, Snooky Lanson (wearing bow-tie), and Dorothy Collins. To the right of (and behind) Collins, seated on a stool, is orchestra leader Raymond Scott.

At left of center, in the foreground (see enlarged section, below), are dancers Dusty McCaffrey, Virginia Conwell, and Lenny Claret.

Behind McCaffrey, Conwell, and Claret are the “Hit Paraders,” the program’s choral group.

The first three female singers (left to right) are: Geri Beitzel, Rae Whitney and Marilyn Jackson; I do not know the name of the last singer in the row. 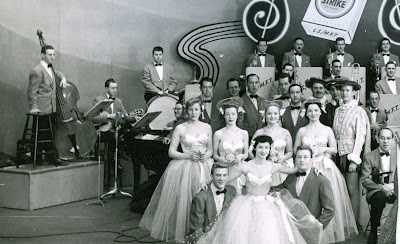 Behind the female Hit Paraders, in the photo, are the male Hit Paraders, at the time. They are (left to right): Marshall Hall, John Smedberg, Gene Lowell (with moustache), Ed Lindstrom, Artie Malvin, and three singers in costume: Hubie Hendrie, an unidentified singer (partially obscured), and Jimmy Pollack.

In addition: the drummer in the photo is Bunny Shawker. The bass player (far left) is Jack Lesberg.