In 2013, there was a story in Time magazine, regarding previously unpublished images of President Kennedy's motorcade in Dallas, Texas, in 1963 (fifty-three years ago today, as a friend reminded me, in an e-mail; I had not realized it was the anniversary). 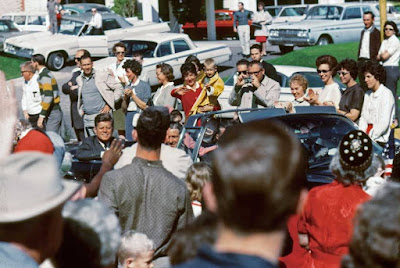 The pictures were taken by an amateur photographer, H. Warner King, a Dallas jewelry wholesaler.  Mr. King died in 2005.  His daughter Sonia, an artist, said the following, in the piece in Time, about the aftermath of her father's death:

"As we were going through his possessions, I didn't want all his old slides at first, because I worried it might be some giant burden and I'd never look at them again.  But I took them, anyway."

She said, in the article:  "Recently, I began to sort through them, and came across a long red box labeled 'November/December 1963 Kennedy.' I found these pictures right away."  She said: "Now, fifty years later, his photographs of the Kennedys finally see the light of day." 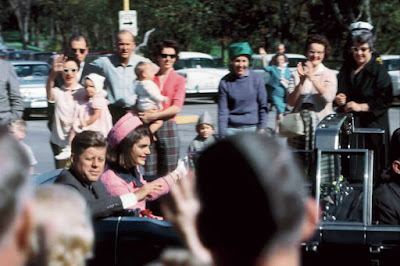 Ms. King said that her father had photographed the motorcade near the Turtle Creek section of Dallas, as it headed toward Dealey Plaza.  Mr. King then drove to the Dallas Trade Mart, where the President was scheduled to speak, to take additional pictures; the speech, of course, never took place.

A couple of the pictures by Mr. King, seen here, are startling, in their sense of intimacy, and proximity--how close the onlookers appear to have been, in relation to the presidential limousine.

Here is the 2013 article, from Time, which includes additional pictures by Mr. King:

(Photographs, above, by H. Warner King)
Posted by Andrew Lee Fielding at 9:13 PM

This is a video I really enjoy.  It is of a live performance of the George Harrison song "My Sweet Lord," with the lead vocal by Billy Preston.  Preston, as is well known, played with the Beatles at the end of their career--and he was one of the musicians on Harrison's original recording of "My Sweet Lord," released in 1970.

The performance in the video--at the "Concert For George," at London's Royal Albert Hall--took place on November 29, 2002, the first anniversary of Harrison's death, at 58.  Next Tuesday will mark the fifteenth anniversary of his death.

Billy Preston's vocal is vibrant, rich, wonderful. The three female backup vocalists-- who, according to Wikipedia, are Katie Kissoon, Tessa Niles, and Sam Brown--are terrific (and they are accompanied, vocally, by some of the musicians).

So, evidently (despite what President-elect Trump charged, during the campaign), the election wasn't rigged against him after all.
Posted by Andrew Lee Fielding at 4:05 PM

I love Philadelphia--lived there for many years.  One of the great pleasures of living in the city was seeing/walking by/driving by Independence Hall, regularly--as well as the nearby pavilion, on Independence Mall, housing the Liberty Bell.

On television, tonight, I watched part of the election-eve rally for Secretary Clinton, taking place on Independence Mall.  Seeing Independence Hall--shown, most often, in the distance--made me miss being in Philadelphia.

I did not see all of Bruce Springsteen's performance, at the rally, but saw him sing "Long Walk Home," and "Dancing in the Dark." His band wasn't with him--he simply accompanied himself on the guitar--and his low-key performance was, I thought, moving and beautiful.

After his performance, there were fine speeches by First Lady Michelle Obama and President Obama--and a nice speech by Secretary Clinton.  It is a precarious moment, in America's history--and I wish the Secretary the very best, in Tuesday's voting.
Posted by Andrew Lee Fielding at 10:52 PM

Kay Starr, and "Wheel of Fortune"

Kay Starr--who sang the very popular song "Wheel of Fortune," a number one hit in 1952--died on Wednesday, in Los Angeles.  She was 94.

The story in The Washington Post noted that she "never wearied — even decades later — when aging audiences requested that she trot out  'Wheel of Fortune.' "

The story, quoting Ms. Starr, continued: " 'Wheel of Fortune' has been good to me.  How could I get tired of it? That's like saying you get tired of the person who gives you everything in the world,' she said. 'And when I see the expressions on the faces of the audience, as they remember, maybe, the first time they heard the song...the pure, unadulterated pleasure it gives them makes it all worthwhile."

The song was recorded by many other singers, but Ms. Starr's version is certainly the best known.  Here is a link to her recording of it, on YouTube:

Here, too, is Dorothy Collins, one of the stars of Your Hit Parade, singing "Wheel of Fortune" on a 1952 telecast of the program. (The audio quality, unfortunately, is less than pristine):

Though my mother was part of the Hit Parade cast, at this time, she did not perform "Wheel of Fortune" on the TV show.  She did, however, sing the song while making a guest appearance, in April of 1952, on the NBC Radio version of the Hit Parade. (While the TV show aired on Saturday nights, and featured bandleader Raymond Scott and the Lucky Strike Orchestra, the radio show, at the time, aired on Thursday nights, and starred Guy Lombardo and his orchestra; each broadcast featured a guest female vocalist.)

Here is an excerpt of my mother singing the song with Guy Lombardo's orchestra: