After learning of the death, at 82, of the heroic Neil Armstrong, I found a magazine I have, from 1965. It is titled “The United States Astronauts and Their Families,” and was published by the World Book Encyclopedia Science Services, Inc.


The picture below, and the accompanying biography, are from the section in the magazine about Armstrong, his wife, and children. At the time, as the magazine notes, Armstrong was 35 years old. 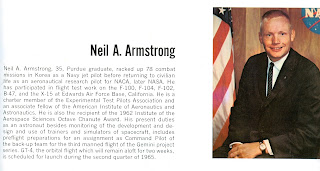 The Mid-Atlantic Nostalgia Convention is underway, in Hunt Valley, Maryland.  The convention, which continues until Saturday, is run by Martin and Michelle Grams.

I was fortunate to be at the convention on Wednesday night and Thursday, taking part in broadcasts on "Radio Once More," the Internet radio station (www.radiooncemore.com).
Posted by Andrew Lee Fielding at 12:13 AM

To the left: a photograph of comedian and musician Merwyn Bogue (also known as Ish Kabibble), with singers Sue Bennett (left) and Liza Palmer (right).

The photo appeared in the January 7, 1950 issue of TeleVision Guide (which later became TV Guide), as part of an article about Kay Kyser and his NBC-TV program, the College of Musical Knowledge.

Also featured on the show, during its first season: the vocal group The Honeydreamers, and announcer Ben Grauer (who also appeared in sketches on the program). The dance team of Diane Sinclair and Ken Spaulding joined the program early in 1950. Writers Eddie Lawrence and Bob Quigley were also featured in the program's sketches.

The Honeydreamers left the show at the end of the first season, as did Ben Grauer. Dancers Sinclair and Spaulding continued with the program during its second season (along with Michael Douglas, my mother, and Merwyn Bogue).  Eddie Lawrence and Bob Quigley continued to both write for and appear on the program, in its second season. 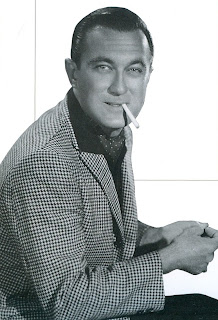 The announcer for the show’s second season was Ted Brown. Brown had appeared on the Dumont Television Network as an announcer, and had also starred, in 1949, on a Dumont Network children’s show, Birthday Party. Each telecast featured a birthday party for a child; Brown played the character “King Cole” (the show was also known as King Cole’s Birthday Party). Later, in 1954, Brown temporarily took over for “Buffalo Bob” Smith on Howdy Doody, when Smith left the show after suffering a heart attack. Brown starred as the character “Bison Bill.”

Brown later became one of New York’s most popular radio personalities, most notably at station WNEW.

(Photo above, of Ted Brown, from the 1984 book WNEW: Where The Melody Lingers On—1934-1984, written and published by Nightingale Gordon)