Amy Winehouse was an immensely talented, and soulful, singer.

Here are two videos of live performances she gave;  both are of her superb song, "Rehab."

The second performance is a more intimate, and more minimal, version of the song; she is accompanied by only two musicians.

There's a publicity photograph of bandleader Kay Kyser which is currently on sale on the auction site ebay.  The auction page includes an image of the reverse side of the photograph, on which a date is stamped:  December 1, 1949.  This is the day that Kay Kyser's weekly television program (a program profiled at length in my book about early TV) made its debut on NBC Television.

I was recently listening (via YouTube) to Louis Armstrong’s beautiful recording of “A Kiss To Build A Dream on,” made with Sy Oliver’s orchestra.
http://www.youtube.com/watch?v=fHjZQb-kGek
The song (as noted in the accompanying YouTube information) was recorded on July 24, 1951 (sixty years ago this month).
This was during the time period with which my book is concerned (the late 1940s and early 1950s; the early years of television, but also, as well, the closing years of the big band period).  And so, because of my own particular focus upon the era (or more precisely, perhaps, my fixation upon it, and my mother’s relationship to it), I make note of the following:

The musicians who played on the Louis Armstrong recording are listed, on the YouTube page.  The bass player on the record, for example, was Sandy Block.  In 1949, Block had been the bassist on the Dumont Network TV show Teen Time Tunes, a weeknight program which featured my mother and The Alan Logan Trio.  In addition to Sandy Block, the Trio featured pianist/Trio leader Alan Logan, and guitarist Al Chernet.
Also playing on “A Kiss To Build A Dream On”: clarinetist/alto saxophonist Milt Yaner.  Nearly two weeks prior to this, on July 12, 1951 (according to the music publication DownBeat), Yaner played saxophone in a session with the George Siravo Orchestra. (Siravo is best remembered, today, as an arranger for Frank Sinatra, Tony Bennett, Doris Day, and others.) 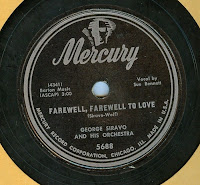 During the session with the George Siravo Orchestra—sixty years ago this week—three recordings were made.  Two of them were released as a 78 on the Mercury label:  an instrumental version of Cole Porter’s “I’ve Got You Under My Skin,” and, on the reverse side, “Farewell, Farewell to Love”; the latter song (co-written by George Siravo) featured my mother as vocalist.  A week later, Frank Sinatra recorded another version of “Farewell, Farewell to Love”, arranged by Siravo, and performed with Harry James’ orchestra. It was released on Columbia Records.
I never knew about the record my mother made with George Siravo until after she died, in 2001.  Some months later, I came upon the record, at my parents’ apartment.  It has become one of my favorite records that she made.
Here is a segment of the recording:
http://www.luckystrikepapers.com/images/Farewell_Farewell_To_Love_George_Siravo_segment.wav 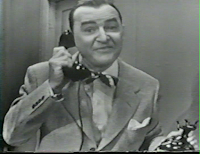 One more note, about music, and television, and my mother’s career, during this period: 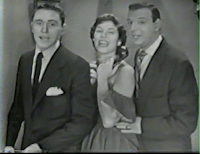 On July 12th of 1951, the day my mother recorded “Farewell, Farewell To Love” with George Siravo’s orchestra, bandleader Freddy Martin’s new weekly TV show made its debut on NBC.  The show starred Martin and his orchestra, and featured singer Merv Griffin, pianist Murray Arnold, and the vocal group The Martin Men.  Each week, a guest female vocalist appeared on the show.  On July 12th, for the debut program, the guest vocalist was Mary Mayo.  The next week, my mother was the guest singer.  Freddy Martin’s show was telecast through the summer, and then continued into the fall;  my mother appeared as a regular guest on the show.  The show went off the air at the end of November of that year.
(Video images, above, made from a kinescope of Freddy Martin’s NBC-TV program. Both images are of a song performance, from a September of 1951 telecast:  Freddy Martin, on a telephone, sings to Merv Griffin, Sue Bennett, and Murray Arnold; they sing, in response, via another telephone.  Pictures used by permission of NBC Studios, Inc.)
Posted by Andrew Lee Fielding at 1:56 PM

I always thought she was a remarkable, courageous, genuine (and wonderfully forthright) individual.

I spent an enjoyable hour tonight as the guest of Morgan White, Jr., on Boston's WBZ Radio.  Morgan has for years been a regular guest host on WBZ (http://boston.cbslocal.com/), and he's been filling in this week for the station's overnight host, Steve LeVeille.  (I've appeared as Morgan's guest a number of times in the past few years.)

We spoke about a particular television topic: police shows (in particular, police detective shows), over time.  Much time was spent talking about the incomparable Columbo program, which starred Peter Falk.  Falk, of course, recently passed away, at 83.

I meant to mention one thing, during the conversation:  that the writer and producer William Link, who with the late Richard Levinson created Columbo (along with many other notable television programs), released a book last year; it features new Columbo-related short stories.  I have not yet gotten the book, but expect to do so soon.

Here is the book's amazon link:

www.morganwhitejr.com
Posted by Andrew Lee Fielding at 1:19 AM