Below:  a photograph from a 1952 issue of "Radio-TV Mirror" magazine.  In the photo are singer Dorothy Collins (far left), my mother (Sue Bennett), and Your Hit Parade choreographer Tony Charmoli. 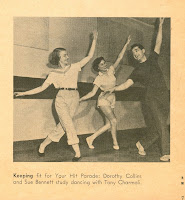 Charmoli, however, was not only the program's choreographer.  He was also the show's stager. The songs on the Hit Parade, each week, were not simply sung; they were dramatized.  It was Charmoli who was in charge of the staging of all of the dramatizations, whether they contained dance routines or not.
Posted by Andrew Lee Fielding at 10:34 PM

I've recently been in touch with educator Calvin Knickerbocker, of Nashua, New Hampshire. Mr. Knickerbocker lectures regularly about Your Hit Parade—both the radio and television versions of the program.

On Thursday (June 17th), Mr. Knickerbocker will be giving a presentation about the Hit Parade at the Madison Library, in Madison, New Hampshire. The presentation—a program of the New Hampshire Humanities Council—will take place at 7 p.m.

The library’s web address is:  http://madisonlibrary-nh.org/WP/
Posted by Andrew Lee Fielding at 11:11 PM

In 1949 and 1950, scientist/astronomer Dr. Roy K. Marshall was featured in the live commercials for Ford automobiles, on Kay Kyser’s television show on NBC. On each program, Marshall explained the engineering/technology of Ford cars.

In a review of the first Kay Kyser telecast, in 1949, critic Harriet Van Horne (of the New York World-Telegram) wrote that Marshall’s Ford commercials “are a show in themselves. And a very good one.” 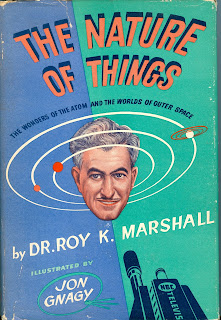 After Kay Kyser’s program went off the air, at the end of 1950, Marshall was featured in the Ford commercials of the program’s replacement, the Ford Star Revue, starring Jack Haley.
From 1948 until 1954, Marshall was the host of the NBC-TV science show, The Nature of Things. As Tim Brooks and Earle Marsh note—in their superb encyclopedia, The Complete Directory to Prime Time Network and Cable TV Shows, 1946-Present (Ballantine Books, several editions)—Marshall “was one of early TV’s favorite scientists.”
Seen above is the cover of a 1951 book Marshall wrote. The illustrator for the book, as the cover indicates, was Jon Gnagy—who was also a well-known personality in early television. His instructional show about art, You Are an Artist, began airing on NBC in 1946; its last network telecast was at the start of 1950.
Posted by Andrew Lee Fielding at 10:51 PM

Last year I found the item, below, on ebay.  It's a weather-related brochure, from 1950, and was published by “your friendly Ford Dealer.”

I am guessing different brochures were created for different parts of the country. This brochure was for Southern California, and included weather information for April of 1950. An article inside is by Gene Bollay, “Ex-Commander, U.S.N.” who, it is noted, served at the time as “Ford’s Weather Analyst.”  Broadcasts on which he appeared were noted, such as the Sunday evening program “Ford Weekly Weather Review and Forecast,” seen on California television station KNBH. 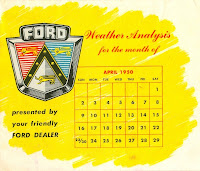 There is also an ad, in the brochure, for other Ford-related TV shows, including Kay Kyser’s. In 1949 and 1950, his College of Musical Knowledge, on NBC, was sponsored by the Ford Dealers of America. In 1950 the Ford Dealers also sponsored the Wednesday night telecast of the popular five-nights-per week show “Kukla, Fran & Ollie," which also aired on NBC.