Re: the broadcast referred to in the post below.  Bad weather, I regret to say, caused my DSL to go out four or five times tonight, throwing the program off the air each time (the show is fed, via Skype, to the Maryland-based station). The last two times the DSL went out occurred during the playing of the pre-recorded interview with author Mike Sowell.  The program was then scrapped; the interview with Mike Sowell will be played in its entirety next week.  Also on next week's program:  writer Denis Ledoux, author of a book about memoir writing, "Turning Memories Into Memoirs."
Posted by Andrew Lee Fielding at 9:02 PM

I've written, in previous posts, about the Internet radio station "Radio Once More"; the station features Old-Time Radio and nostalgia-themed programming (please see:  www.radiooncemore.com).  I've appeared regularly on the station this year, as a guest, as a guest co-host, and (for the past few months) as a weekly host.  The show I'm hosting is called, simply, the "Thursday Live Show," and it airs Thursday nights from 9 to midnight; the program focuses largely on nostalgia-oriented subjects (but focuses, too, on other matters--such as history-related subjects which are not nostalgia-related).

On tonight's program, one of the topics will be the 1920 death of Cleveland Indians shortstop Ray Chapman, after he was hit by a pitch thrown by New York Yankees star Carl Mays.  The guest will be Mike Sowell, author of the book The Pitch That Killed.

In December of 1952, shortly before my mother’s New York television career ended, she appeared in a benefit show; it was for the War Wounded Christmas Fund of the New York Journal-American newspaper. At the time, she was singing on Morey Amsterdam’s local TV program, Breakfast with Music; the program aired weekday mornings on New York station WNBT (later renamed WNBC), and also starred musician (and bandleader) Milton DeLugg. 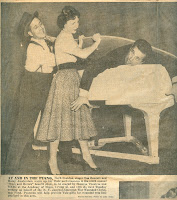 The benefit took place at Skouras’ Academy of Music in New York, and included appearances by Dagmar, Gene Rayburn, Skitch Henderson, Faye Emerson, Clifton Webb, Morey Amsterdam, Herb Sheldon, Jackie Robinson, Marguerite Piazza, and Ben Grauer, who served as the show’s MC.
The above Journal-American picture (rather wrinkled, unfortunately) appeared in the paper the week before the benefit, and featured Herb Sheldon, my mother, and Morey Amsterdam. The picture below (a Xeroxed image, which, one also notes, has accumulated scrapes and other imperfections, over time) was part of a feature in the newspaper after the show took place. 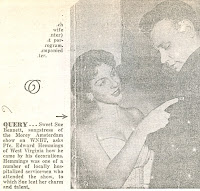