Martin was a guest, tonight, on my weekly "Radio Once More" program.  The show airs from 9 p.m.-midnight, Eastern time, on Thursdays.

The address of Martin's web site is:

He was often referred to as the "poet laureate of radio." Norman Corwin—writer, director, producer—died yesterday, at 101.

During the segment, Lanson describes a mistake which occurred during his singing of “O Holy Night,” on the Hit Parade’s 1954 Christmas broadcast. The YouTube video includes (at 3:23) a kinescope segment; the kinescope footage (not part of the 1974 Mike Douglas broadcast) includes the error Lanson was describing:

Here, too, is the link for the Gisele MacKenzie YouTube channel:

I’ve referred, in previous posts, to a biography of bandleader Kay Kyser, brought out in April by BearManor Media.

The book, Thinking of You—The Story of Kay Kyser, is by the late Raymond D. Hair, and by Jürgen Wölfer. 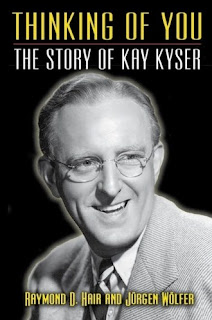 I’ve only had the chance to read a handful of sections of the book, but wanted to mention a fascinating detail which appears in one of the book’s chapters.
The detail occurs in a part of the book which concerns the end of Kay Kyser’s television program (which aired on NBC in 1949 and 1950), and Kyser’s imminent retirement from show business.
By way of preface: in my own book about early television—a significant portion of which concerns Kay Kyser’s TV show—I noted that the orchestra which played on the New York-based television program was not made up of Kay Kyser’s longtime musicians; members of the New York musicians’ union were hired to play in the TV show’s orchestra. Popular Kay Kyser saxophonist Jack Martin and cornetist and comedian Merwyn Bogue (a/k/a Ish Kabibble) were the only longtime band members to become part of the television show (in addition to Carl Hoff, who had been musical director of the band, earlier in the 1940s; he led the orchestra on the TV program).
The new Kay Kyser book indicates (via an interview with trombonist Joe Howard, who was not part of the television show’s orchestra, but who had been part of Kay Kyser’s band in the 1940s) that there was regular turnover in the television band’s personnel—that band members were hired for only brief periods of time, and new musicians then joined the program. I was not aware of this; my impression was that there had been continuity in the TV band’s personnel.
The book also makes this contention: that the musicians who were hired to play in the television program’s orchestra were not especially enamored of Kay Kyser's talent.

“The musicians hired for the show in New York did not know Kyser,” the authors write. During the period of the TV show, the authors say, Kyser “wished to spend all the time he could with his family. He was at home every night. This was far different than it was during the days of the radio show when he was traveling across the country entertaining troops.”
The authors continue: “The New York musicians were not aware of what Kyser had done. They only knew what they saw while playing on the TV show. Due to that they didn’t recognize his abilities and felt he was overrated. Kay knew their feelings, but said nothing about it.”
I have no knowledge of the preceding paragraph’s details, regarding the musicians on the television show—yet the statements (e.g., the musicians “felt [Kyser] was overrated”) sound rather sweeping to me. I am a bit perplexed, too, by the suggestion that the TV show’s musicians would have been unaware “of what Kyser had done.” In 1949 and 1950, despite the decline of the big band era, Mr. Kyser was still regarded as a major figure in American entertainment.
Nonetheless: there is another detail in the book, concerning the end of Kay Kyser’s TV show (and the end of his show business career), which I find compelling.
The authors write:

The cancelation [of the television show] did not concern Kyser. He had long wished to leave the stress and physical demands of show business. This was a good chance for him to return to his beloved Chapel Hill. As soon as he finished his business in New York, he headed south.
Merwyn Bogue recalled, “It was Christmas day of 1950 that Kay sent us all a letter saying he didn’t want to talk to any of us down at his office in New York, and not to try to contract (sic) him about anything. He was retiring - goodbye - and like that. I went down to his office in New York…and he looked surprised when I came in the office.
According to Bogue, as reported in the new book, the following exchange occurred between the two:

The distinguished historian Oscar Handlin recently passed away, at 95.

Here is an obituary, from The New York Times:

Here, too, is an amazon link to for his well-known book about immigration, The Uprooted: The Epic Story of the Great Migrations That Made the American People. The book received the 1952 Pulitzer Prize for history.