Garry Shandling was extraordinarily talented, and The Larry Sanders Show remains one of the best programs in TV history.

Here is an obituary, from The New York Times: 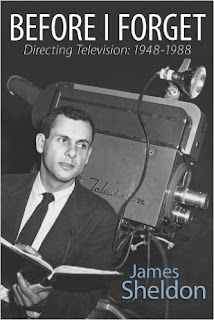 Mr. Sheldon directed a great many television programs over the decades, including episodes of The Fugitive, My Three Sons, Room 222, My World and Welcome to It, Perry Mason, The Virginian, Batman, Ironside, Julia, M*A*S*H, Naked City, Route 66, Mr. Peepers, Armstrong Circle Theatre, Robert Montgomery Presents, and The Waltons.

He directed six episodes of The Twilight Zone, including one of the most chilling of the series--1961's "It's a Good Life," starring Billy Mumy, as a child with deadly abilities.

Here is a list of Mr. Sheldon's directing credits, from IMDB.com:

I interviewed Mr. Sheldon a few years ago, while I was host of a weekly on-line radio program, and enjoyed our conversation very much.  We spoke about his 2011 book, Before I Forget--Directing Television: 1948-1988, published by BearManor.

Early network TV, and the theatre

In early network television, there was a kinship (a notable one) between the new medium, and the theatre.

For one, any number of Broadway performers--actors, dancers, singers--appeared in early television broadcasts.  Many vaudeville performers, too, became a part of early TV.

Yet the television/theatre kinship went beyond the participation of Broadway and vaudeville entertainers. Early television offered (for the most part) live performances, live telecasts, and did so in a broad fashion:  there were dramas, variety programs, comedy, music-oriented shows, talent shows, quiz and audience participation programs, operas.  Such programs gave, to much of early TV, a generalized theatrical sense.  Yet it was a new theatrical variant:  live performance seen in the home (or, perhaps, the nearby tavern, where television sets were often a staple).

As if to underscore the theatrical linkage, various early TV programs originated from theatres.  In  1949 and 1950, for example, Kay Kyser's TV program on NBC (on which my mother was featured) was telecast from New York's International Theatre, at Columbus Circle.  Beginning in early 1950, Sid Caesar's Your Show of Shows was also telecast from the theatre, as, for a time--starting in the fall of 1950--were Jerry Lewis and Dean Martin's Colgate Comedy Hour broadcasts.

One of the programs originating from the theatre was 1951's The Freddy Martin Show (the subject of a recent post in this space).  For most of its early seasons on NBC-TV, Your Hit Parade--which came to television in 1950--was also telecast from the Center Theatre. (For part of the 1951-1952 season, the program originated from NBC's Studio-8H, at 30 Rockefeller Center.)  NBC's Four Star Revue, which featured rotating hosts (originally Ed Wynn, Danny Thomas, Jack Carson and Jimmy Durante), was another program telecast from the theatre.

(Both venues--The International Theatre, and The Center Theatre--were torn down in 1954.) 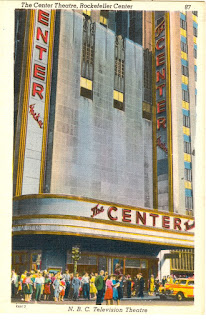 Seen here is a postcard of the Center Theatre (a photo, one notes, which has the look of having been at least partially colorized).  The front of the postcard refers to the theatre's role as a television facility--"N.B.C. Television Theatre," the postcard reads--yet the image appears to predate the period during which NBC television productions were housed there. To the left of the picture, at the bottom of the marquee, one can make out, faintly, what looks like the words "Hats Off."  "Hats Off to Ice," a live ice show co-produced by the skater Sonja Henie, was seen at the theatre from 1944 to 1946.) 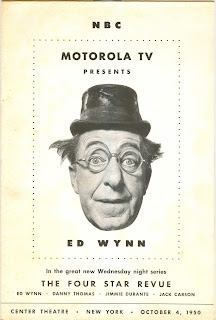 There is also this, about one of the NBC shows which came from the Center Theatre:  The Four Star Revue provided audience members with programs/playbills about the telecasts; the playbills, indeed, offered emphasis to the television/theatre relationship.

Shown here, too, is part of a four-page program from the October 4, 1950 premiere of the show, hosted by Ed Wynn.  The inside pages list the show's primary staff members, as well as providing details about the telecast's  "Scenes," and the performers appearing in them.  The back page of the program (not shown here) provided a lengthy list of behind-the-scenes personnel. 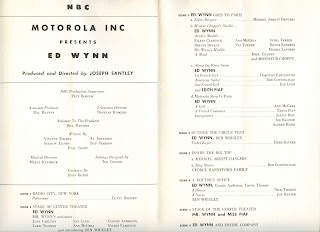 Incidentally, a well-known early 1950s radio variety show, NBC's The Big Show, starring Tallulah Bankhead, was also broadcast from The Center Theatre.  The radio program, ninety minutes long, featured, each week, a roster of prominent guest stars.  The show was heard from November of 1950 (at a time when radio, due to the rise of television, had begun its decline), until April of 1952.

The radio program, Wikipedia notes (an observation I cited in a previous post about the show), "is remembered as one of the great final stands, at its best, of classic American old-time radio..."

I'll write more about The Big Show--more precisely, about a forthcoming book about the show, by Martin Grams, Jr.--in an upcoming post.
Posted by Andrew Lee Fielding at 1:44 PM