The guest stars for the last show included Ted Lewis, and Frances Faye.

After his show left television, Kay Kyser, forty-five years old, retired from show business. (He passed away in 1985, at age 80.)

After his TV show ended, Kyser returned with his family to his home state of North Carolina. He became involved in various community-oriented efforts—such as, playing a key role in bringing public television to the state.

Here is a ticket (its scuff marks and scratches more pronounced in the scan) from Kay Kyser’s last TV broadcast. I found it years ago, amidst other things my mother had saved from her career in New York (such as, scripts, recordings, photographs, newspaper and magazine stories, etc.).

Though it does not show up well in the scan, if you look to the right of the phrase “TELEVISION SHOW," you’ll see a name, written in pencil. It says “Kulik.” In that it is not my mother’s handwriting, I am guessing this means that the ticket had originally been put aside for (or, was put aside at the request of) Buzz Kulik, the show’s director, but that perhaps he ended up not needing it.
Later, Buzz Kulik became one of television’s best-known (and most accomplished) directors. In the 1950s, after directing Kay Kyser’s show, he directed such live television dramatic programs as Playhouse 90, Climax, and Lux Video Theatre. In the 1960s, he directed a number of episodes of The Twilight Zone, and worked on The Defenders, Have Gun, Will Travel, and many other programs.
He is perhaps best known for his direction of the landmark made-for-television film Brian’s Song, which aired in 1971. He also directed a number of feature films, including 1980’s The Hunter, which was Steve McQueen’s last film.
Though I did not know this when I interviewed him in 1981, Kulik also directed one of the TV productions I enjoyed most during childhood: a 1970 "Hallmark Hall of Fame" drama written by Rod Serling, A Storm in Summer, which starred Peter Ustinov.  Ustinov won an Emmy Award for his performance, the show itself was named "Outstanding Dramatic Program" (for 1969-1970), and Kulik received an Emmy nomination for his direction of the program.
Kulik (who passed away in 1999, at age 76) also received Emmy nominations for the 1984 mini-series George Washington, for the 1976 television film The Lindbergh Kidnapping Case, for a 1961 episode of Dr. Kildare, and for Brian’s Song.
Posted by Andrew Lee Fielding at 5:50 PM

And, as sung by Frank Sinatra:

In 1949, Gene Autry’s “Rudolph the Red-Nosed Reindeer” was released, and it became a hit (and classic) recording. In the next couple of years other singers (such as Bing Crosby, and Spike Jones) recorded the song.  It again became a Christmas-time hit in 1950, 1951, and 1952. 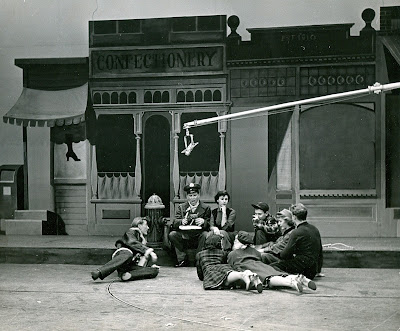 The song appeared as one of the top seven songs on Your Hit Parade for part of December of 1951, and continuing into the first week of January, 1952.
During one of those weeks, my mother sang the song with Snooky Lanson; on another telecast, she sang the song alone.
Above:  a rehearsal photograph of the performance with Snooky Lanson (it is a picture which does not appear in my book). Also in the photograph: the Hit Parade Dancers (including Dusty McCaffrey, far left, and Carmina Cansino, second from right).

I haven’t watched Larry King’s program for a while, but his final show this past week was enjoyable.

One of the guests was the routinely entertaining Regis Philbin. During the segment Philbin mentioned that Larry King knew a lot of old songs, and loved to sing them.

Philbin began singing a particular song, and asked King to sing it with him. The song was “So Long For a While,” which was the closing theme of Your Hit Parade, on both radio and TV. Philbin changed some of the words, to suit the occasion of King’s last show.

King, however, did not sing along; he was obviously a bit thrown by Philbin’s invitation to do so, and explained that he didn’t know the song.

Here is a video of the exchange between Philbin and Larry King. The Hit Parade-related portion of the segment takes place during the first minute and twenty seconds of the video.


Here, too, is an audio recording of “So Long For a While,” from a spring of 1951 television broadcast of Your Hit Parade. The first vocalist heard is Eileen Wilson; she is followed by Snooky Lanson and Dorothy Collins. The entire cast then joins in.

I’d like to recommend a documentary (now available on DVD) that I wrote about in a recent post, and which I have now seen.

Deconstructing Dad is by filmmaker Stan Warnow, and is about his late father, the extraordinary Raymond Scott—orchestra leader, musician, composer, and electronics inventor/visionary.

The film is a finely-crafted, impressive work—an enjoyable, moving, and satisfying blend of biography, musicology, memoir, and family portrait.

As noted in my previous post, critic and historian Leonard Maltin has called the film a “fascinating look at a musical genius and the way he lived his life. Stan Warnow allows us to share his journey of discovery as he pieces together the story of his father. I thoroughly enjoyed it.”
Warnow is the film’s director and producer, as well as its narrator, and interviewer. The film’s co-producer is Jeff E. Winner (who created, and runs, the official Raymond Scott website:  http://raymondscott.com/).
To learn more about the film, please click on this link: http://www.scottdoc.com/

(Photo above: Stan Warnow, from the “Deconstructing Dad” website)
Posted by Andrew Lee Fielding at 2:31 PM

Here are three videos of John Lennon, with The Beatles.

The first, with Lennon as lead singer, is of a live performance of “Twist and Shout,” from 1964.

In the second, in a scene from the movie Help, Lennon sings the lead on “You’re Gonna Lose That Girl.”

Lastly, the announcement by Howard Cosell, thirty years ago tonight, during a telecast of Monday Night Football, that Lennon had been killed in New York.

The Lucky Strike Papers is currently being offered, via my website, for the discounted price of $19.95, which includes Media Mail shipping and Delivery Confirmation.