"The Ipcress File," and Cape Cod

Memories from childhood can be striking, mysterious. Sometimes the memories are unusually distinct; sometimes vague, elusive.

This includes, indeed, images and stories from television, and films.

Last week, I watched the excellent spy film The Ipcress File (starring Michael Caine), on TCM.   I think the only time I had seen it, previously, was when it originally came out, in 1965. It's possible I saw the film again a few years after that, on TV, but I don't believe so.

I asked my brother about the movie, after watching it again.  He told me we originally saw it at a movie theatre on Cape Cod.  He said (I have no memory of this) that our mother took us to see it, along with one of our childhood friends.  (I was nine, in 1965; my brother was twelve.)

My brother's memory of seeing the film on Cape Cod is, I am sure, accurate. The website IMDB notes that the film was released in August of 1965.  In August, during that part of the 1960s, our family would have been on the Cape, staying in a small cottage we rented each summer.

I recall liking the film, decades ago, but before seeing it again, last week, I remembered only one detail from it--a sole detail, and nothing else.  It was the image, in the film, of a nail. The scene with the nail—an important scene, in the movie--scared me, as a child; in watching the movie again, I can see why it did, can understand why I focused on it, then, to the degree I had.  Last week, the scene, and its memorable image, may not have been as frightening to me as it had been, decades before, but it was still riveting nonetheless. 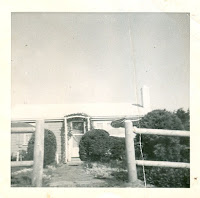 If my childhood memory of the film was limited to one arresting detail from a particular scene, my memories of Cape Cod, during the summers of that era, are far less confined.

I remain drawn, for example, to any number of memories of the cottage we rented--which include watching part of the 1968 Democratic Convention, on the black and white TV set in the small living room. (Although the furniture in the house was not our own, I think the TV set might have been ours, brought from home.) The TV was near the living room's picture window, which overlooked a bluff, and the ocean, just beyond.  The cottage--which we rented until perhaps 1970 (when I was fourteen)--was (along with the area surrounding it) one of the places I have loved most in my life.

A number of years later, on a visit to the Cape–at the end of the 1970s, as I recall--I tried to find the cottage (which, my father had told me, had had a second floor built onto it).  I couldn't locate it, couldn’t find the dirt road which had led to the small neighborhood.  In the end, after taking a different route, I was, simply, unable to tell if I was in the right place. The entire area had been developed, it was unrecognizable, and after a short time (startled by this loss of bearings), I gave up looking.

(Photo above: the cottage referred to, on Cape Cod; the photo is marred by a vertical crease toward the right side of the picture. I don't know the date of the picture; it is probably from the mid-1960s)
Posted by Andrew Lee Fielding at 4:58 PM

I've listened, recently, to two enjoyable interviews--one, this past week; the other, in November or December--with historian and author Anthony Mitchell Sammarco, on Boston's WBZ Radio (a station I've written about with some regularity, in this space).  The interviews took place on Bradley Jay's overnight program.

Sammarco has written several dozen books about Boston, its neighborhoods, and environs (and points beyond, in Massachusetts).  Though I have not yet read his work, I look forward to doing so; it becomes quickly evident, listening to him, that he knows his history thoroughly.

Many of his books have been brought out by Arcadia Publishing, a press whose books I have enjoyed, over time.

Arcadia has a vast catalogue of titles, about America's cities/towns, locales, communities (and about other local and regionally-themed subjects).  The books are frequently picture-centric, focusing upon archival/vintage images, as opposed to contemporary views--as in the publisher's "Images of America" series (in which the books' covers, indeed, are sepia-toned).  (Current-era views can be seen in such Arcadia series as "Then & Now," and its "Images of Modern America" books.)  In 2014, Arcadia expanded its reach: it acquired The History Press (the American subsidiary of the UK's "The History Press, Ltd.).  Together, Arcadia and The History Press release some 900 titles each year.

Lost Boston, from Pavilion Books (2014)--which was the primary focus of this week's radio interview. The book looks at--as its amazon.com description notes--some of the city's "disappeared buildings and places."

A History of Howard Johnson's:  How a Massachusetts Soda Fountain Became an American Icon (from American Palate, a division of The History Press, 2013). 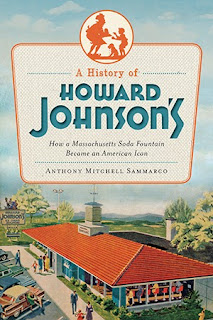 Some of Mr. Sammarco's other books about Boston and its neighborhoods are:

Here, too, is a 2013 interview with Mr. Sammarco in The Boston Globe, about his Howard Johnson's book:

Am really shocked to hear about the death of the extremely talented David Bowie.

Here is Kitty Kallen's fine vocal, on "I'm Beginning to See the Light," with Harry James and his Orchestra, from 1945:

And this is a lovely recording, a hit from 1944, featuring Ms. Kallen and Bob Eberly, singing "Besame Mucho" with Jimmy Dorsey's orchestra:

Ms. Kallen died today at her home in Mexico, at age 94.