As mentioned previously, in this space, I was the host of an online radio talk show between 2011 and 2014.  During that time, I did a little (emphasis on "little") comedy bit on the program, once or twice (probably twice; I tend to repeat myself), about The Ed Sullivan Show.

I said, on the radio program, that it seemed like most of the guests on Ed Sullivan's show, over the years, had either the name "Jack," or "Jackie":  Jackie DeShannon,  Jackie Wilson,  Jack E. Leonard, Jackie Vernon, Jack Carter, Jackie "Moms" Mabley, Jackie Mason, Jack Jones--and so on.

Recently, I read a 1965 book, A Gift of Laughter (Atheneum Publishers), an autobiography by the supremely talented song parodist/comedian Allan Sherman. I enjoyed coming upon the following, in the book:

"Willie Weber [an agent] handled the careers of several dozen comedians, most of whom were named Jackie. Willie, as far as I could tell, had only one single show-business instinct: he was one hundred percent dead certain that the only good name for a comedian is Jackie. You couldn't argue this point, because he was making a fortune.  If a Sam, Alvin, Clyde or Montmorency walked into Willie Weber's office and signed a contract, he walked out under the name of Jackie, and somehow Willie kept his Jackies busy working all the time. Willie wasn't too happy when I insisted on remaining Allan, but he figured it would be real good if he could have somebody like me around to supply jokes and funny songs to his stable of Jackies, which included Jack E. Leonard, Jackie Miles, Jackie Winston and Jackie Gleason."

While writing this post, I went online, to see if there were other Jacks or Jackies I had forgotten--and found an enjoyable/interesting passage from a 2015 book by Kliph Nesteroff, The Comedians (published by Grove Press).

Here is a link to the book, on amazon:

Here, too, via YouTube, are three Allan Sherman songs.

The first is Mr. Sherman's most famous record, 1963's "Hello Mudduh, Hello Fadduh." Mr. Sherman (who died in 1973, of emphysema, not long before he would have turned 49) was perhaps not a "trained" singer, but I loved his voice; he had a very appealing and distinctive singing style. And his lyrics (often co-written by Lou Busch, his musical arranger and conductor): they were entertaining, and very funny--and always scanned so beautifully.

Another song--according to the YouTube video, the recording is from a 1963 live performance, in California--was titled "Overweight People" (to the tune of "Over the Rainbow"):

I recently switched my car's main odometer to the "Trip" odometer. Forgot to switch it back to the main one, and as a result missed when it reached 100,000.   :( 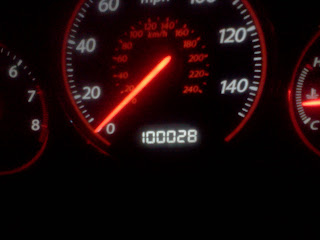 Turner Classic Movies is certainly one of television's best networks, and Robert Osborne was its signature host--from TCM's inception in 1994, until early 2016, when he left the air due to illness.

It was always a pleasure watching his broadcasts; Mr. Osborne was a very fine, likeable and informative host.  He died on Monday, at age 84.