The Center Theatre, and NBC 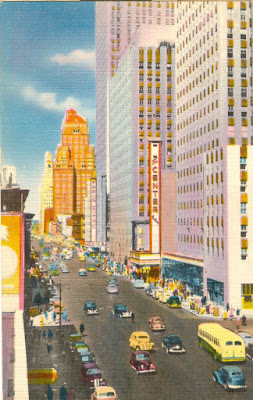 In an October 7th post, I referred to New York's Center Theatre, at Rockefeller Center.  The theatre was, in the 1950s, the home of a number of NBC television programs.

It had previously been a legitimate theatre (and had, at other times, been a movie palace).  NBC took over the theatre in 1950, refurbishing it for television productions; it was used for such programs as the Four Star Revue, Your Hit Parade (in its early years), and Your Show of Shows (in its latter period).  Certain NBC radio shows also aired from the theatre, including The Big Show, a noted 1950-1952 variety program which starred Tallulah Bankhead. The theatre was torn down in 1954.

In 1951 and 1952, my mother performed at the theatre--on the Hit Parade, and on The Freddy Martin Show (also known as the Hazel Bishop Show, after its lipstick sponsor).

In the postcard, above (date unknown), the Center Theatre is seen, at the center-right; Radio City Music Hall can be seen in the distance.  The postcard is titled, on its reverse side, "Looking North on the Avenue of the Americas (6th Avenue)."

After President Trump said he would not take part in a virtual debate with former Vice President Biden (a debate which would have taken place tonight), the event was cancelled by the Commission on Presidential Debates.

In place of the debate, Mr. Biden scheduled a Town Hall telecast with ABC News, which will air tonight at 8 o'clock, from Philadelphia.  The program's moderator will be George Stephanopoulos, and will be seen for 90 minutes.

NBC announced yesterday that Mr. Trump will also take part in a Town Hall meeting tonight.  It will begin--like the Biden telecast--at 8 o'clock.  The NBC program, airing from Miami, will be moderated by Savannah Guthrie, and will last an hour.

NBC's decision--to air its telecast opposite ABC's--is a bad one.  At this stage of the campaign--less than three weeks before Election Day--voters should not have to choose which broadcast to watch. The network surely could have scheduled the forum with Mr. Trump at a different hour, or day.  NBC's programming decision does not serve the public interest, and has--justifiably--received much criticism (including from within the network).

In the summer of 1950, the network radio program Your Hit Parade--also known as the Lucky Strike Hit Parade--came to television; it had aired on radio since 1935.

The summer telecasts were successful, and on October 7, 1950--70 years ago today--the TV program began its weekly broadcasts on NBC (from New York's Center Theatre, at Rockefeller Center). The television show would continue airing for most of the 1950s.

In early 1951, my mother, singer Sue Bennett, joined the Hit Parade's cast.  At first, she performed in live Lucky Strike commercials on the show, with singer Russell Arms, and others.  She later became one of the show's featured singers, performing on the program until the end of the 1951-1952 season.

The next season, Eileen Wilson was replaced by singer June Valli; Russell Arms also became one of the show's starring singers. In the fall of 1953, singer Gisele MacKenzie replaced Valli.  MacKenzie, Dorothy Collins, Snooky Lanson, and Arms--the show's best-remembered performers--remained with the program until 1957.

A new starring cast, made up of younger singers, was brought in for the 1957-1958 season.  The show was then changed again, when it aired for part of the 1958-1959 season; it moved to CBS, and starred Dorothy Collins, and singer Johnny Desmond.

The President returns to The White House

This evening, after three days at Walter Reed, yet still contagious--his doctors say he is not yet out of danger--President Trump left the hospital.  He apparently didn't like being cooped up.

On Twitter, prior to returning to The White House, Mr. Trump--as he has, so often--minimized the virus's severity:

After leaving Marine One, and ascending the White House steps, Mr. Trump looked out over the South Lawn. The event was being broadcast live, during the network newscasts.

Then--it was an extraordinary, ostentatious, deeply jarring moment--he took off his mask, and put it in his coat pocket.

Moments later, he gave a "thumbs up" sign.  Soon, after saluting Marine One as it began its takeoff, he turned around, and entered the building.  He was greeted by what appeared to be a small group of people inside.

One wonders: Did it cross his mind--for even an instant--that by removing his mask he might be putting those working for him, in The White House (or perhaps, one should say, those who remain in The White House; the list of those infected with COVID continues to grow), in danger?