Here is the obituary from The New York Times, the paper for which he wrote for many years.

The advertisement, below, is for Van Camp's foods, and appeared in the magazine Woman's Day, either in 1950 or 1951.  The ad refers to the television program sponsored by the Stokely-Van Camp company, Van Camp's Little Show, which starred the singer and actor John Conte (the program was also known as John Conte's Little Show).  The musical program, fifteen minutes long, aired Tuesday and Thursday evenings on NBC, from 1950-1951.  My mother was a regular guest vocalist on the program, in 1951.

In the close-up image, one can see the phrase "Look-Listen-Enjoy" (it is used in reference to the television show); the phrase is a variant of the slogan which was employed by the company at the time:  "Heat-Eat-Enjoy." The "Heat-Eat-Enjoy" slogan also appears in the advertisement, above the box of "Tenderoni." 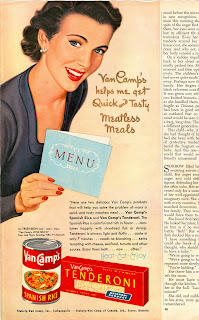 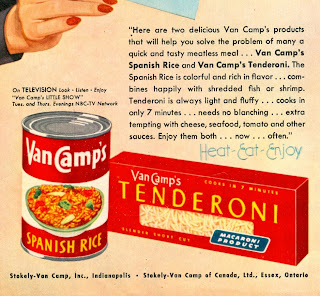 Here are a few terrific performances by the enormously talented Carly Simon; the first two are from a concert in Central Park, and broadcast by ABC, in the early 1970s.  The first song is "Anticipation," written by Simon.  The second song, written with her frequent songwriting partner Jacob Brackman, is "That's The Way I Always Heard It Should Be"; I think it is one of the more beautiful songs which came out of the rock era, and this live performance, by Simon, is particularly beautiful.

The last video is from a live performance by Simon in 1995, in New York's Grand Central Station.  It is of the song "Haven't Got Time for the Pain," also written by Simon and Jacob Brackman.

During my weekly radio program tonight (on the Internet station "Radio Once More"), a listener from Canada mentioned (on the station's Facebook page) Canadian singer (and Hit Parade star) Gisele MacKenzie, and her well-known appearance on Jack Benny's television show in the 1950s. (I unfortunately don't know the year of the appearance.)  The listener later posted a YouTube link featuring the performance, in which Benny and MacKenzie played a violin duet of the song "Getting To Know You." The performance is very funny, very charming, and quite wonderful.

Here is the link:

This is a video from the David Letterman program, NBC, 1982.  It is of Marshall Crenshaw singing his terrific song "Someday, Someway."

Here's a nice video of the great singer/entertainer Jackie Wilson, from 1962, on Ed Sullivan's program.