The S.S. United States, in The Wall St. Journal

Learned of this story, which appears in today's Wall Street Journal, via the e-mail newsletter of the S.S. United States Conservancy.

For more information about the Conservancy:

As noted previously in this space, the S.S. United States was the site of the last telecast, for the 1951-1952 season, of the TV show "Your Hit Parade"; the telecast took place five days prior to the ship's maiden voyage. The ship, and the telecast, are written about in The Lucky Strike Papers.
Posted by Andrew Lee Fielding at 10:55 AM 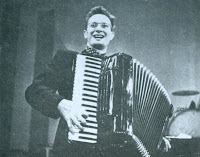 Stu Shostak is the owner and program director of Shokus Internet Radio; he’s also the host of various Shokus talk shows. (I recently appeared on the Shokus program “TV Confidential,” hosted by Ed Robertson and Frankie Montiforte.)
This Wednesday (9/16), between 7 and 9 p.m. (EST), Stu Shostak’s weeknight program (“Stu’s Show”) will feature an interview with the well-known musician, bandleader, and songwriter Milton DeLugg.
DeLugg has had a fascinating career. (An interview with DeLugg—who starred on many programs during the era of early television—is featured in my book.) He was the co-writer (with Willie Stein) of the song “Orange Colored Sky,” a hit record in 1950 for Nat King Cole. With Frank Loesser, he wrote 1950’s “Hoop-Dee-Doo,” recorded by Perry Como. He was the orchestra leader on early television's first late-night hit show, Broadway Open House, in the 1960s was the musical director, for a time, on The Tonight Show, and later was the bandleader on The Gong Show. He has, through the years, been a prominent music producer and arranger, and he continues to serve as musical director of New York’s Macy’s Thanksgiving Day Parade.
My mother and DeLugg worked together in the fall of 1952, on Breakfast with Music, a local, five-morning-a-week New York TV show, which starred Morey Amsterdam. DeLugg was the show’s musical director.
To listen to Wednesday night’s interview with Milton DeLugg, please go to: http://shokusradio.com/
(Above photo: Milton DeLugg, on Broadway Open House)
Posted by Andrew Lee Fielding at 4:38 PM

On Monday night, I’ll be making a return visit to the Internet talk show “TV Confidential,” now originating at Shokus Internet Radio (http://www.shokusradio.com/). The show’s hosts are Ed Robertson and Frankie Montiforte.
The program will air Monday night, from 10:00 p.m. (EST) until midnight. It will also be rebroadcast the next night (11 p.m., EST), on Share-A-Vision Radio (http://www.ksav.org/). The show formerly originated at KSAV.
I’ll be on for about forty-five minutes during the first hour; one of the subjects we’ll be discussing is the career of bandleader Kay Kyser.
The show’s second hour will feature an interview with William Schallert. Schallert is one of the most recognizable actors in TV history; he has appeared on countless television shows, through the years. Many 1960s television fans will remember his role as Martin Lane, the father of Patty Duke’s character, on The Patty Duke Show.
For additional information about the career of William Schallert, please go to: http://www.imdb.com/name/nm0769974/
For more information about “TV Confidential,” please see: http://www.tvconfidential.net/.
(Above photo: William Schallert)
Posted by Andrew Lee Fielding at 3:47 PM