The following recording is of Judy Garland, singing "Have Yourself a Merry Little Christmas."

The song was introduced by Ms. Garland in the 1944 film in which she starred, Meet Me in St. Louis. The record she made of the song, as heard below, was released that year. The song itself is very beautiful--as, indeed, is Ms. Garland's vocal performance.

I've written many times, in this space, about the S.S. United States, the legendary ocean liner.  It went into service in 1952, and was retired in 1969.  It has been docked on the Delaware River, in Philadelphia, since 1996.

A piece about the ship was recently posted on CNN.com.

To those who are celebrating the holiday: Happy Chanukah...

The passage of time 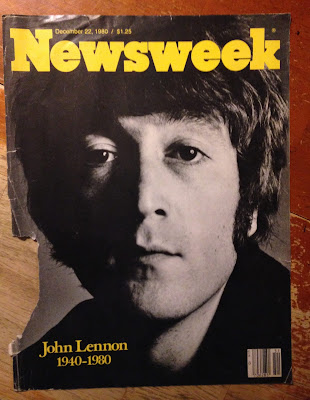 The photograph on the above Newsweek cover was by Richard Avedon.  It was originally part of a larger picture Mr. Avedon took of the Beatles, in 1967.

As is apparent, the copy of Newsweek, which I have had since 1980, is torn (I don't recall when this happened), and the cover became separated from the rest of the issue.

Morgan White, Jr., the longtime talk host at Boston's WBZ NewsRadio, will be returning to the station as a host this weekend.

"The Morgan Show" will air Saturdays, from 9 p.m. to midnight.

Morgan, about whom I've written a number of times in this space, has been a friend for more than a decade. In March, his weekend overnight shows on WBZ were put on hold, due to the pandemic. WBZ, and its owner, the iHeart radio group, began limiting the number of staff members who could work in-person at the station.

With the start of his new program, Morgan will not, indeed, be working on-site, at WBZ;  he will be broadcasting from his home in suburban Boston.

One of his guests, tomorrow night, will be Boston-based entertainer, author, and trivia expert Mel Simons--who is also a friend, and who has, as well, been the subject of a number of posts on this blog. Mel will appear on tomorrow's program from 10 p.m. to 12 a.m.