Here is a video of the very impressive British singer Adele, performing her hit song "Rolling in the Deep," at a radio station (I believe in the Netherlands).

Adele has received six Grammy nominations for 2012, including two for "Rolling in the Deep": Record of the Year, and Song of the Year.  The awards will be televised February 12th on CBS.
Posted by Andrew Lee Fielding at 4:59 PM 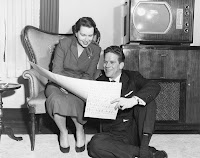 I recently bought this photograph, on ebay. It's of singer Snooky Lanson, with his wife Florence.  The photo is dated 1959, which was two years after Lanson's tenure as one of the stars of Your Hit Parade ended.
It's a nice photo of the Lansons. I also like the television set, in the background, which I think looks something like a microwave.
Posted by Andrew Lee Fielding at 6:22 PM

I've written about Ricky Riccardi in previous posts. He is the Archivist at the Louis Armstrong House Museum in Queens, New York, and earlier this year Pantheon brought out his book about Armstrong: What a Wonderful World: The Magic of Louis Armstrong's Later Years. The book, which I recently read (in advance of interviewing him about it, on "Radio Once More"), is terrific, and can be found at the following amazon link:

Here, too, is the link for Ricky Riccardi's popular Armstrong-related blog:

http://www.dippermouth.blogspot.com/
Posted by Andrew Lee Fielding at 11:09 AM

A new CD by Doris Day is being released. While the CD’s release date in the US has been reported as being December 2nd, it will be available on amazon.com on December 6th (and on the Barnes & Noble site, bn.com, a week later). (A shorter version of the CD appeared in the UK in September; the US version contains an additional song.)

Of the thirteen recordings on the CD, most were recorded in the mid-1980s (and were produced by Ms. Day’s late son, Terry Melcher), but were never released. (A few of the songs, the UK-based website “Discovering Doris Day” notes, were aired on Ms. Day’s 1980s TV show, “Doris Day’s Best Friends.”) Another of the recordings was made for a 1970s Doris Day TV special, and a few others are previously-released Day songs. The UK website also notes: “All proceeds from the American release of the album will go to Ms. Day’s animal welfare organisation, the Doris Day Animal Foundation (DDAF).”

Terry Melcher, Ms. Day's son, passed away in 2004. He is perhaps best known for his work with the 1960s group The Byrds; he produced the group’s early recordings, including “Mr. Tambourine Man,” and “Turn, Turn, Turn.”

Here are two stories about the new Doris Day CD, from the “Discovering Doris Day” website:

The CD’s amazon.com link is:

In addition, here is the web page of the Doris Day Animal Foundation: