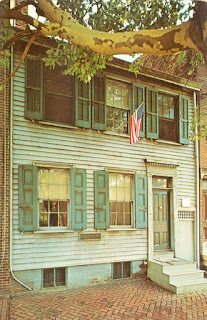 In 1984, I moved to Philadelphia. Soon afterwards (it was near the top of my to-do list), I drove to nearby Camden, just across the Ben Franklin Bridge, to take a tour of Whitman's home.  He lived in the house the last several years of his life, and died there. This is a postcard of the house, which I got either at the time of the visit, or not too long after.
Posted by Andrew Lee Fielding at 8:57 AM 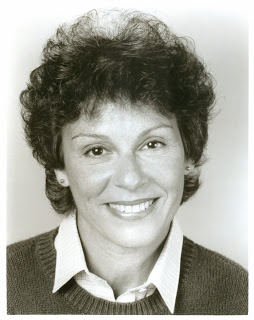 This is a photograph of my mother, which she used professionally. I believe it is from the late 1980s or early 1990s.

I learned, recently (with sadness), about the death of Eileen Wilson, one of the original stars of television's Your Hit Parade.  She died last September 9th in Washington state, where she had lived for decades.  When she died, due to Alzheimer's disease, she was 95 years old.

Wilson was a superb singer--on radio, television, records, and in films.  She had a lovely, assured, beautiful voice.

In the 1940s, Ms. Wilson was a big band vocalist--with Skitch Henderson's orchestra, and with Les Brown's--before joining the Hit Parade radio show in 1948.  During part of her tenure on the radio show, she starred with Frank Sinatra.

In 1950, while she sang on the radio show, the program also came to television.  Four experimental telecasts of the Hit Parade aired on NBC during the summer of 1950.  At the outset, Wilson and Snooky Lanson were the TV show's primary singing stars; singer Dorothy Collins also starred.

Ms. Wilson sang on the television program through the end of the 1951-1952 season.

During the 1950s, there were three incarnations of the TV show.  The first lasted for much of the decade--airing from 1950 to 1957. Its best-remembered vocal cast, no doubt, featured Dorothy Collins, Snooky Lanson, Russell Arms, and Gisele MacKenzie, who starred together from 1953-1957. In early 1957, MacKenzie announced she would leave the show after the 1956-1957 season, to star in her own NBC program. Her departure led to the second incarnation of the TV show, airing from 1957 to 1958. A new vocal cast--a group of younger singers--was brought in to replace the previous stars; a new bandleader also took Raymond Scott's place.  The program then returned briefly, in 1958 and 1959; its stars were Dorothy Collins, and singer Johnny Desmond.

Before she died, in September, Eileen Wilson had been the only surviving vocal star from the show's 1950-1957 period.

Ms. Wilson's husband was Ray Kellogg--who, like Wilson, had been a singer with the Skitch Henderson and Les Brown bands; he had also sung with the Sonny Dunham orchestra. Wilson and Kellogg married in 1948.  Later--from the 1950s until the 1970s--Kellogg worked regularly as a television and movie actor. He died in 1981, after a lengthy illness.


I interviewed Ms. Wilson in 1983, by telephone. It had been a year and half since her husband's death.  She missed him very much, she told me.  She also remembered, with affection, her years as a singer and performer.

Before the Hit Parade TV show, Wilson had appeared as a guest on Pantomime Quiz, a charades program, when it was a local California show.  She had been on the program with her husband, with bandleader Les Brown, and with a record company executive.  She was nervous before appearing on the show, but then "it was just so fast and you were so excited, you didn't even know you were on television."  Nor, later, was she fearful performing on the Hit Parade. "There was just no big trauma in moving into [the television program], because everything was just so planned out," she recalled...

AF:  There was no great fear, for you.

Eileen Wilson:  No, none at all, absolutely none.
I just think it was because of the production staff....
The production staff just pulled that thing together....
Here we were, we have our talent, our talent is singing,
tell us what you want us to do, move us here, move us
there, give us our costumes.  It was all planned out for us.

The Hit Parade television show, she told me in 1983, was "one of the highlights of my life."  It was, she said, "a perfect show--I'm just so lucky and thankful to be able to have done something like that."


Here is a song by Ms. Wilson, on Decca Records, with Sy Oliver's orchestra;  the recording was made in 1951, during the time she sang on the Hit Parade.  It is of the 1939 song  "I Thought About You" (music by Jimmy Van Heusen, lyrics  by Johnny Mercer).

(The song was recorded later by her radio Hit Parade co-star, Frank Sinatra; it appeared on his 1956 album, "Songs for Swingin' Lovers!")

Ms. Wilson was also known, during her career, for her work in films.  Over time, she dubbed the vocals for various actresses.

Here, from YouTube, is the song "Don't Tell Me," sung by Wilson for Ava Gardner, in 1947's The Hucksters.  The film also starred Clark Gable and Deborah Kerr.

Here, as well, is a 1946 recording of Wilson's husband, Ray Kellogg, singing the song "Where or When," on the Ginny Simms radio show:

Lastly, while the visual quality of the following YouTube video is not very good, the audio quality is fine.  In it, Ms. Wilson sings the song "If," during a 1951 telecast of Your Hit Parade: