Ken Burns, and the film "The U.S. and the Holocaust"

Modern life moves increasingly fast.  The work of the outstanding documentarian Ken Burns offers a counterpoint to such acceleration.

His films--his America-centered histories--move slowly, in the best sense of the word. Their unhurried pace allows for depth, nuance, and rounded portraits--from 1990's The Civil War, to his recent films Benjamin Franklin (2022), Hemingway (2021, co-directed by Lynn Novick), and Muhammad Ali (also from 2021, co-directed by Sarah Burns and David McMahon).

I find that Mr. Burns's films routinely stay with me--images from them, words, stories, emotions. One continues to admire the (signature) sense of orchestration:  the use of still pictures; the rare, often startling, archival films his production company manages to locate; the superb interviews, commentaries, narrations.

Tonight, from 8 until 10:15 (Eastern time), the first installment of Mr. Burns's new documentary (co-directed by Lynn Novick and Sarah Botstein) appears on PBS. The film is The U.S. and the Holocaust.  Its subsequent two episodes air later in the week. (Broadcast times may vary, depending upon location; one should check one's local PBS listings.)  I'm very much looking forward to watching the program.

Please see these links, from PBS:

One continues to think, often, of September 11th.

One of the (many) ways to remember the catastrophe--to focus upon, reflect upon, the magnitude of the terror, the loss, and the heroism--is to read.

As such, a few days ago, I began reading the 2019 oral history of September 11th, and its aftermath, The Only Plane in the Sky, by Garrett M. Graff (Avid Reader Press/Simon & Schuster).

Historian Jon Meacham said, of the book, in 2019:  "This is history at its most immediate and moving. In The Only Plane in the Sky, Garrett Graff has crafted an enduring portrait of a deadly and consequential day, a day that has shaped all other subsequent days in America..."

The passage of time: Princess Diana

Today is the 25th anniversary of the death of Diana, the Princess of Wales.  She was 36, when she died after a car accident in a Paris tunnel.

Her boyfriend, Dodi Fayed, was killed in the accident, as was the driver of their car, Henri Paul.  The bodyguard in the car, Trevor Rees-Jones, was seriously injured.

Her good friend, Elton John, performed a song in her honor at the funeral.  After her death, Mr. John's lyricist, Bernie Taupin, wrote new words to "Candle in the Wind."  The original song, a tribute to Marilyn Monroe, first appeared on Mr. John's 1973 album Goodbye Yellow Brick Road.

In the 1997 version, which paid tribute to Diana, the opening lyric, for example--"Goodbye, Norma Jean"--was changed to "Goodbye, England's Rose."

Below is a video, from the television broadcast of the funeral, of Mr. John's moving performance of the song. The song begins approximately one minute after the start of the video.

I had wondered, in the past, how Mr. John was able to learn, and remember, the new lyrics to the song, in such a short period of time.

In 2019, Mr. John recalled that he was indeed concerned that he might forget the new lyrics, while singing at the funeral--such as, the fear he might accidentally sing the phrase "Goodbye, Norma Jean." As a result, he said, there was this precaution: "It's the first time I had a teleprompter, a teleprompter down on my left-hand side..."

Jerry Allison, Buddy Holly, The Crickets, and The Beatles

The following is a video I enjoy a great deal; it is of Buddy Holly and the Crickets, from December 1, 1957, performing "That'll Be the Day" on The Ed Sullivan Show. The song had been released as a 45 record in the spring of 1957, and it became a number-one hit.

Buddy Holly was a tremendously talented (and, of course, extremely influential) singer, guitarist, and songwriter.

In addition to Mr. Holly, I particularly enjoy the style of the Crickets' drummer, Jerry Allison, as seen in the above video. There is ease, strength, and dexterity in Mr. Allison's playing. His drumming swings. 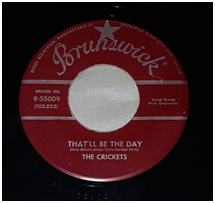 As the music chronicler Joel Whitburn notes, in The Billboard Book of Top 40 Hits: 1955 to the Present (Billboard Books, 1989), Mr. Holly and the Crickets were signed to two Decca Records subsidiary labels: Brunswick and Coral. The contracts specified that the Brunswick recordings (such as "That'll Be the Day") would be credited to The Crickets. The Coral releases, such as "Peggy Sue," would be credited to Mr. Holly.

(The group's first album, which was released the week before the above 1957 appearance on Ed Sullivan's program, was a Brunswick record, and its title, therefore--The 'Chirping' Crickets--referred solely to the ensemble.)

Mr. Allison was one of the writers of "Peggy Sue," released in September of 1957; the song was named for Mr. Allison's then-girlfriend (they were later married, for a number of years). The group's producer, Norman Petty--an important figure in the success of Mr. Holly and the Crickets--also received a writing credit for "Peggy Sue"--and though Mr. Holly was not originally named, on the record label, as a co-writer of the song, his writing credit was added in later pressings. Mr. Allison and Mr. Holly also co-wrote "That'll Be the Day," for which Mr. Petty also received a writing credit.

Below is a video of Mr. Holly and the Crickets performing "Peggy Sue," from the same 1957 Ed Sullivan telecast, above. 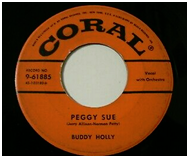 In The New York Times obituary of Mr. Allison, below, mention is made of the widely-known influence that Buddy Holly and the Crickets had on The Beatles; the Beatles were great admirers of Mr. Holly, and his group. The Times obituary includes the following, from an interview Mr. Allison gave to the Associated Press in 2013:

“Paul McCartney did tell me," Mr. Allison said, "that if there hadn’t been the Crickets, there never would have been the Beatles."

The Beatles released a notable (and lovely) version of another Buddy Holly song, written by Mr. Holly, "Words of Love."  It appeared in the U.S. in 1965, on the "Beatles VI" album--six years after Holly's 1959 death, at age 22.

The Beatles' name, indeed, was inspired by Mr. Holly and the Crickets--though there are differing versions of the particulars of the story.  Beatles biographer Philip Norman, in his 1981 book Shout! The Beatles in Their Generation, wrote that in 1960 The Beatles, at the time using the name Johnny and the Moondogs (after the group's leader, Mr. Lennon), were seeking a name-change--looking, Mr. Norman wrote, for "something spry and catchy, like Buddy Holly's Crickets."  Norman wrote that Stu Sutcliffe, the group's then-bassist (who was also a painter), "half-jokingly, wrote down 'beetles' in his sketchbook, such a silly idea that the others said, why not? John, unable to leave any word alone, changed it to 'beat-les,' as a pun on beat."

For a time, the group went by "The Silver Beatles"--but then settled on the simpler name which would ultimately become known across the world.

Donald Trump, and the government documents

On August 18th, New York Times reporter Maggie Haberman wrote the following, about Donald Trump's view of the many government documents he had kept, after his presidency:

"They're mine," three of Mr. Trump's advisors said that he stated repeatedly when he was urged to return [the] boxes of documents, some of them highly classified, that the National Archives sought after Mr. Trump took them with him to Mar-a-Lago, his private club in Palm Beach, Fla., in January 2021.

The process, as Ms. Haberman noted, involved a "nearly 18-month back-and-forth between the government and Mr. Trump," which led to the F.B.I. search at Mar-a-Lago on August 8th.

What Mr. Trump insisted to advisors, about the documents he had taken, is--in essence--a corollary to what he has evidently believed, since losing the 2020 election, convincingly, to Joe Biden.

The Presidency, and The White House?

Will be watching CNN this evening, from 9-10 p.m. (Eastern time).  The network is airing one of its "special report" broadcasts; tonight's is titled "Rising Hate: Antisemitism in America."

The program's host is the excellent reporter and political analyst Dana Bash.  She is CNN's chief political correspondent; she is also the co-anchor, with Jake Tapper, of the Sunday morning program State of the Union.

I have written a number of times, in this space, about the S.S. United States, the legendary ocean liner.

I also wrote about the ship in my book about early television. The last telecast of Your Hit Parade's 1951-1952 season originated from the ship.  Though my mother did not know it at the time, the telecast from the United States would be her last appearance on the program.

The broadcast from the ship aired on June 28, 1952, on NBC.  This was five days prior to the United States' maiden voyage--from Pier 86 in New York Harbor, to Southampton, England.  The voyage began on July 3, 1952, seventy years ago today.  The ship arrived in England on July 7th.

The United States was in service from 1952 until 1969.  The liner has been docked on the Philadelphia waterfront since 1996--in disrepair, and having been stripped of its interior fittings (in the 1980s and 1990s) prior to being taken to Philadelphia. Despite its disrepair, the ship remains, in person, an astonishing, and beautiful, sight. At 990+ feet, it exceeds, by more than one hundred feet, the length of the Titanic.

In 2011, the United States was acquired by the S.S. United States Conservancy, a group devoted to the ship's history, and preservation. The purchase was made possible by a substantial grant from the noted Philadelphia philanthropist H. F. "Gerry" Lenfest. Mr. Lenfest died in 2018, at age 88.

The first photograph, below, was taken in New York, the day the United States began its maiden voyage.

The next photograph was taken the week before.  It is of an NBC cameraman, his camera trained upon the ship; it is one of many photographs my mother was given in 1952--many of them rehearsal photographs--related to the season-ending Hit Parade broadcast. 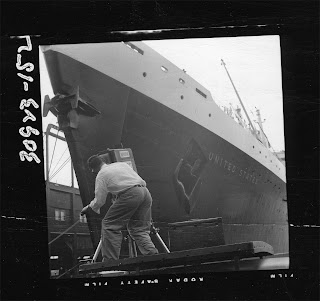 Lastly, the photograph below is of the United States on the Philadelphia waterfront. I was given a tour of the ship in the fall of 2000, by a representative of the ship's then-owner, and was accompanied by Philadelphia-based photographer and artist Jenny Lynn (referred to in a recent post), who took many photos during the tour, including this one. 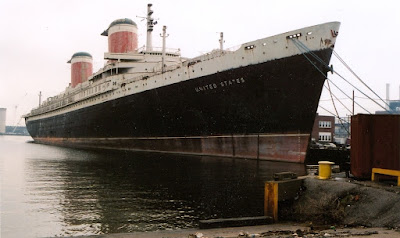 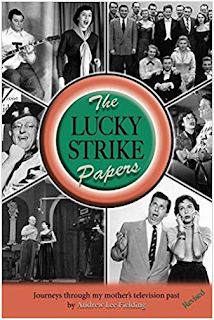