The program was an exceptional and compelling achievement--historically, visually, musically, emotionally.

The program--further evidence, if any was needed, of Mr. Burns' enormous talent--was terrific.

The next installment of the documentary airs tonight (at least on the public station I watch), followed by episodes on Tuesday and Wednesday; the episodes then continue next week, from Sunday through Wednesday.

Please check your local PBS listings; as suggested above, broadcast scheduling can vary.
Posted by Andrew Lee Fielding at 4:56 PM

The annual (and always enjoyable) Mid-Atlantic Nostalgia Convention (a/k/a/ MANC) is taking place this week in Hunt Valley, Maryland.  The convention opened this morning (Thursday), and will be running until Saturday.

I've attended the convention several times, but am unable to do so this year.  There are a number of friends who are attending--and I regret I will not be there to see them, and spend time with them.

The publisher of my book about early television, BearManor Media, is represented at the convention; BearManor has, for a number of years, had a table at MANC (along with the convention's other nostalgia-oriented vendors).

Yet while I will not be there, a couple of signed copies of my book are available at the BearManor table (or, at least, were available when the convention opened; I do not know if either has thus far been purchased).

This year, author John C. Abbott is presiding over the BearManor table. Mr. Abbott is the author of multiple books, brought out by BearManor, about the Old-Time Radio series Yours Truly, Johnny Dollar.

Here is the amazon.com page which lists his Johnny Dollar titles:

On Saturday, at 10:30 a.m., Mr. Abbott will be making a presentation, at the convention, about the radio series.

Another presentation I'd like to mention will take place Friday morning, at 10:00.  Author Garry Berman will be giving a talk about the actress Thelma Todd.

I interviewed Mr. Berman a couple of times, while I was host of an online, nostalgia-oriented radio program (2011-2014); we spoke about two of the enjoyable books he has written. One of the conversations concerned his 2008 book, We're Going to See the Beatles! An Oral History of Beatlemania as Told by the Fans Who Were There (Santa Monica Press). The second interview focused upon his 2011 biography, Perfect Fool: The Life and Career of Ed Wynn (published by BearManor).

Lastly, here is the link to the page of the MANC website which lists this year's talks/seminars: 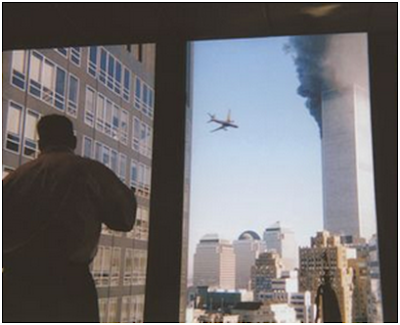 This is a photograph which was taken on September 11, 2001, but was not published until the next year. The picture, taken by Will Nuñez, appeared in the September 2002 issue of Vanity Fair, with other previously unseen images of the September 11th catastrophe, in an article titled "Two Towers: One Year Later." Mr. Nuñez's photograph also appeared in a book released the same month, Here is New York: A Democracy of Photographs (Scalo Verlag Publishers).

As the caption in Vanity Fair noted, in part: "After the first plane hit Tower One, bond analyst Will Nuñez went to his corner newsstand and bought a $14.99 disposable camera, hoping to record the scene for history's sake.  Minutes later, from his downtown office window, he captured United Flight 175 as it sped toward Tower Two."