Here's a nice blog post by Marcel Chotkowski LaFollette, independent historian, and Research Associate at the Smithsonian Institution Archives.  The post, from July 19th, is about advances in technology, in the 1960s, which affected the coverage of political conventions.

When I last hosted a radio talk show (it aired on a nostalgia-oriented Internet station), I spoke on two occasions with Dr. LaFollette.  On one of the programs, we discussed her excellent 2009 book Science on the Air: Popularizers and Personalities on Radio and Early Television (University of Chicago Press).

On a later broadcast, we talked about her fine follow-up book, 2013's Science on American Television: A History (also published by University of Chicago Press).

Another of LaFollete's books--which I have on my shelf, but have not yet read--is Reframing Scopes: Journalists, Scientists, and Lost Photographs from the Trial of the Century (University Press of Kansas, 2008).

Samuel Francis Smith, and "My Country, 'Tis of Thee"

This is an old postcard, which I purchased on ebay. Though the precise age of the card is not known, the ebay seller noted that it was "pre-1920."  It pictures a house in the city where I grew up (Newton Centre, Mass.). 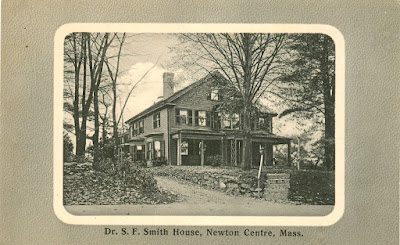 I passed by the house routinely, as a child (in the 1960s). It was located just after the last store on the main street of the Newton Centre business district, and was set back from the street.  It seemed mysterious, and, as I recall, a bit scary.  I'm fairly sure it was unoccupied, during those years, and I walked up to it a number of times, to look at it--though I don't remember when, in childhood, I became aware that it had been the home of Samuel Francis Smith, who wrote the words to "America" (a/k/a  "My Country, 'Tis of Thee").  As the link below notes, the house burned down in 1969, but I don't remember this happening (I was thirteen, at the time).

Here is the Wikipedia entry about the song:

Here, too, is a brief video, from YouTube, of a performance of the song by Marian Anderson; it took place in 1939, during her famous appearance at the Lincoln Memorial.

For two decades, Jordan Rich has been the weekend overnight talk show host on WBZ Radio, the legendary Boston station. He announced several weeks ago that he had decided to leave his weekend programs.

This weekend's shows will be his last--though he will continue to be heard on the station, via recorded features: his daily "Connoisseur’s Corner" segment, as well as his "New England Weekend" feature. This Monday evening he will also--as in the past--anchor the station's annual July 4th special; the program airs from Boston's Esplanade, and features a concert by the Boston Pops.

His weekday work as co-owner of Chart Productions, an audio production company outside of Boston, will continue.  He co-founded the company--which also provides marketing and voice-over services--in 1980.

Jordan Rich is a terrific broadcaster--warm, funny, insightful, engaging.  Along with so many others, I will miss, very much, his immensely enjoyable weekend programs.
Posted by Andrew Lee Fielding at 4:40 PM