Re: the radio show “Dave White Presents,” the subject of the previous post.

Although I was of course very pleased to be a guest on the 7/22/09 Dave White broadcast, I was also eager to listen to the show’s other guest.

Following my interview segment with Dave White, the program featured the second part of an interview with drummer Andy White, conducted by regular “Dave White Presents” contributor Wesley Britton. It was enjoyable listening to their conversation.

Beatles fans may know of White as the drummer who played on “P.S. I Love You,” and on the best-known version of “Love Me Do.”

In 1962, Ringo Starr, who had recently joined the Beatles, played on a recording of “Love Me Do,” yet producer George Martin was evidently displeased with his performance. A week later studio/session drummer Andy White was brought in, to play on another recording of the song. That day, White's drumming was also featured on “P.S. I Love You.”

One final detail about “Love Me Do”: another version of the song—featuring drummer Pete Best—was recorded a few months before the Starr and White versions were made, and can be heard on “Beatles Anthology #1.”

For information about interviewer (and author) Wesley Britton, please click on this link:

I taped an enjoyable interview recently, with Dave White, host of the Internet radio variety show “Dave White Presents.” The show, ninety minutes long, airs every other week on “Share-A-Vision” radio (http://www.ksav.org/), at 10:30 p.m Eastern Time. The interview aired this past Tuesday.

Dave White, in introducing me, mentioned some of the places I’d written for, and then noted that I’d also worked as a radio talk show host. Of the latter detail, he then said: "But we decided to let him on in spite of that." I thought that was quite funny.

The interview can be accessed via the "Dave White Presents" page, at ksav.org; the segment begins about 24 minutes into the show, and lasts about 35 minutes.
Posted by Andrew Lee Fielding at 2:56 PM 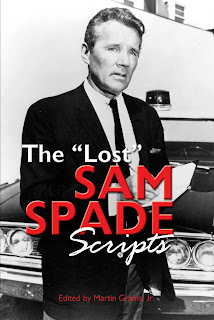 Am currently reading, and enjoying, “The ‘Lost’ Sam Spade Scripts," edited by Martin Grams, Jr. Martin, as previously noted in this space, has written a great many books about old radio and television shows. Some of those books (and this latest one) were published by BearManor Media.
“The ‘Lost’ Sam Spade Scripts” features an introduction, and then thirteen scripts from the 1940s/1950s “Adventures of Sam Spade” radio series. The radio program (as shown in the accompanying image) starred Howard Duff.
Here’s the amazon.com link for the book:
http://www.amazon.com/Lost-Sam-Spade-Scripts/dp/159393453X/ref=sr_1_1?ie=UTF8&s=books&qid=1247524926&sr=1-1
Further information about Martin Grams, Jr., and his books, can be found here: http://www.martingramsjr.com/
At the end of August, I'll be part of a panel discussion, with Martin (and other authors), at the "Mid-Atlantic Nostalgia Convention," in Aberdeen, Maryland. Martin is one of the convention's organizers.
Posted by Andrew Lee Fielding at 3:50 PM