I have mentioned previously, in this space, that during the time my late mother was a featured singer on Your Hit Parade, on NBC-TV (during the 1951-1952 season), she made two guest appearances on the radio version of the Hit Parade, also on NBC. One of those appearances took place in April of 1952; the other appearance took place on this date, sixty years ago.
Here is a press release about the January, 1952 appearance, from the BBD&O advertising agency. BBD&O was the agency which oversaw the Hit Parade radio and television programs. 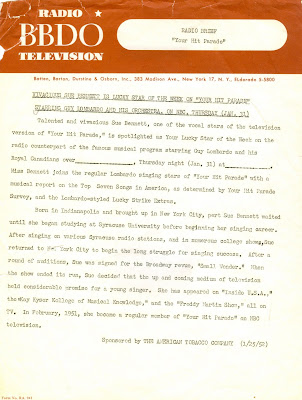 I learned a few days ago that Diane Sinclair, a well-known dancer in early television, passed away last May. She was 90. 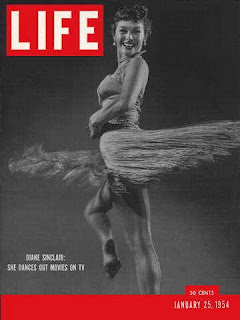 Ms. Sinclair and her dance partner, Ken Spaulding, were the featured dance team on Kay Kyser’s 1949-1950 TV show on NBC-TV (they joined the show in early 1950). They also starred on Dave Garroway’s 1953-1954 NBC show, and on The Paul Winchell and Jerry Mahoney Show, also on NBC, from 1951 to 1953.
In 1954, Ms. Sinclair appeared on the cover of Life magazine; the photograph of her was taken by Gordon Parks. A photo feature by Mr. Parks, inside the issue, concerned Ms. Sinclair and Ken Spaulding.
I interviewed Ms. Sinclair at length, in 1984, for my book about early television. I loved the conversation: Ms. Sinclair’s comments, I have long felt, are some of the most interesting, and insightful, in the book.
After the book was published, at the end of 2007, I sent her a copy, and we ended up speaking by phone, on several occasions, over the next few years.

I remain grateful for the interview she gave me, in 1984. I am also grateful for the friendship (a warm, if intermittent, one) which came about, years later, and am very saddened to learn about her death.
Here is a Wikipedia page about Ms. Sinclair:
http://en.wikipedia.org/wiki/Diane_Sinclair
(Image above: Gordon Parks's photograph of Diane Sinclair, on the cover of the January 25 1954 issue of Life magazine)
Posted by Andrew Lee Fielding at 4:25 PM

Here is a photograph (and accompanying press release) that I recently bought on ebay. The picture is of bandleader Kay Kyser, and his comedy sidekick, Merwyn Bogue (a/k/a “Ish Kabibble”).
The picture, from NBC Television, is dated December 25, 1949; Kay Kyser’s TV show, the College of Musical Knowledge, had made its debut, on NBC, a few weeks before. 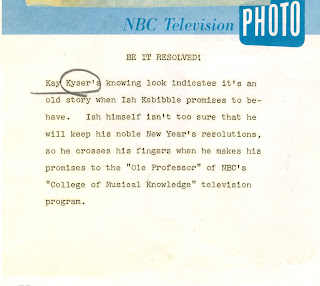 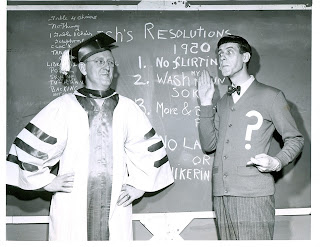 Sixty years ago, on this date—January 14, 1952—the Today show made its debut, on NBC-TV. The program’s host was the unusually talented and compelling figure Dave Garroway. Mr. Garroway was host of the program from 1952 until 1961.

Here is a brief film, from later in 1952, about the relatively new medium of television; its host is Mr. Garroway.

One of the television shows featured in the film is the drama Dangerous Assignment, which starred Brian Donlevy. According to The Complete Directory to Prime Time Network and Cable TV Shows, 1946-Present, by Tim Brooks and Earle Marsh (Ballantine Books, several editions), the drama (which was syndicated) made its debut in early 1952.  Thirty-nine episodes were produced.

By the way: near the end of the film (while describing television’s immediacy and reach), Garroway says: “...from a river rampage, to the proud debut of an American superliner.  Television has a new world to bring you. And now, it’s in your town.”

The superliner shown in the film is the legendary S.S. United States; its maiden voyage took place the first week of July, in 1952. The ship, as noted on previous occasions in this space, plays a part in my book about early television. The last episode of Your Hit Parade’s 1951-1952 season, on NBC, originated from the S.S. United States, five days before the ship’s inaugural voyage.
Posted by Andrew Lee Fielding at 5:34 PM 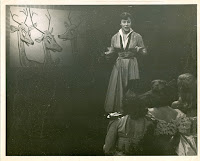 This is a photograph of a rehearsal for the January 5, 1952 telecast of Your Hit Parade, on NBC (sixty years ago this week).  In the picture (which, unfortunately, contains various scratches and other imperfections), my mother, Sue Bennett, is singing the #6 song on the Hit Parade survey that week: "Rudolph the Red-Nosed Reindeer."  (The #1 song that week was "Slow Poke.")
According to the script she was joined in the song by the show's vocal chorus, The Hit Paraders (who appeared both on-camera, and off-camera, during Hit Parade broadcasts), though I am guessing that the performers in front of her are three of the show's dancers.  The performer to the left looks like dancer Virginia Conwell; the performer at the right looks like it might be Bobby Trelease.  Both Conwell and Trelease were prominent dancers on the program.  (They were both, in addition, routinely featured in key non-speaking acting roles, during Hit Parade production numbers.)
The script, by the way, notes that the images behind my mother are to be seen "by means of the vue-graph rear projection."  I find the phrase "vue-graph" interesting, but am unsure what it means.  Perhaps it was simply another name, at the time, for the rear-projection process, or perhaps it referred to a specific kind, or specific brand, of rear-projection device; I have not come upon the phrase elsewhere.