The distinguished film, television and stage director Arthur Penn, best known for films such as Bonnie and Clyde and Little Big Man, died on Tuesday, at age 88.

Before becoming a film director, Mr. Penn was a prominent director in live television (including directing the 1957 Playhouse 90 production of The Miracle Worker, which he also later directed on Broadway, and then as a feature film).  He was very kind, and gracious, when he spoke with me in 1981 about his television work.

Here is a brief exchange with Mr. Penn, from my book:

AF: I spoke with [director] Buzz Kulik, and he said that he and some friends used to say that if you worked in live TV, you could work in any medium, that nothing could throw you.

Penn: I would agree. I’ve never run into anything as tough as that...It sort of raised [your] threshold of fearlessness. If you could do those damn things, you could do anything.
Posted by Andrew Lee Fielding at 4:40 PM

In the 1980s, when I was a radio talk host in Philadelphia, I interviewed journalist Janis Johnson on perhaps two or three occasions; at the time, she was writing for The Philadelphia Inquirer. During her years as a journalist Johnson was also on the staff of The Washington Post, was a correspondent for USA Today, and wrote for other major U.S. newspapers.

Last year, I came upon her website, and dropped her a note. She’s now a communications consultant, based in California. As her website indicates, her clients include “small and emerging businesses,” and she works often with non-profit organizations, such as colleges/universities (see the Johnson Consulting website: http://www.jjohnsoncommunication.com/).

In August, Johnson published a book, which (as one whose own book is a mixture of family history, and cultural history) looks to me to be very interesting.

The book, The Artist’s Eye, pays tribute to the 1950s artwork of her father, Vernon P. Johnson—and addresses, too, the American period the artwork depicts. 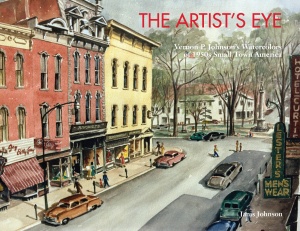 From the book’s website/blog:
“The Artist’s Eye: Vernon P. Johnson’s Watercolors of 1950s Small Town America uses Mount Vernon, Ohio as the setting to document the enduring legacy of this transitional decade in which the first generation of Baby Boomers was born.
“In the 1950s, Mount Vernon in Knox County in central Ohio was an iconic example of small town America, animated by the tug between tradition and progress. Johnson was an accomplished watercolor artist and Ohio native who studied under influential artists of the popular ‘Cleveland School’ in the late 1930s and after serving in World War II, became a graphic design innovator in the burgeoning flexible packaging industry. He had a particular vision for small town America, which he illustrated in his paintings of Knox County.

“In a volume that is part memoir, author Janis Johnson, the artist’s daughter and a published journalist and writer, takes us back to the 1950s using extensive family memorabilia and her father’s paintings, drawings, journals and writings. She returned to her hometown of Mount Vernon, Ohio to capture the voices of those who knew the artist and own his works. In partnership with the Knox County Historical Society, ‘The Artist’s Eye’ translates the story of one community into the larger and more far-reaching story of the 1950s across America.”

For additional information about the book:

An e-mail address is provided on the website, to inquire about purchasing the book. The book is also available through the Knox County Historical Society, in Ohio:

In August, on this blog, I inquired about the identity of a singer in a Wikipedia picture I posted. I was contacted by Howard Green of North Hollywood, California; he let me know that the singer was Helen O’Connell.

After Mr. Green wrote me, I learned that he has made many contributions to a website about Doris Day. The website, “The Films of Doris Day,” can be found at this address:

Mr. Green is also known as a collector of Doris Day audio recordings. His collection includes many rare recordings of her radio appearances.

I’ve enjoyed Doris Day’s work for years—her vocals, her acting. A favorite film of mine is Alfred Hitchcock’s The Man Who Knew Too Much, from 1956; it starred Day, and James Stewart. Her performance in the film (during which she sings “Que Sera, Sera”) is superb.

Here’s a segment of a Doris Day recording that I enjoy a great deal. It is from 1947, during the time she sang on the Hit Parade radio show. The recording was included on an album of Hit Parade performances, brought out many years ago by Sandy Hook Records, and released in the 1990s on CD (“Your Hit Parade, The Memorable Radio Years, 1938-1952.”). She is introduced by Frank Sinatra, and sings “The Lady from 29 Palms.”
http://www.luckystrikepapers.com/images/The_Lady_From_29_Palms.wav
In more recent years, of course, Day has become well-known for her advocacy on behalf of animals, through her important and wonderful organizations:  the Doris Day Animal League (http://www.ddal.org/), and the Doris Day Animal Foundation (http://www.ddaf.org/).  The Animal Foundation became independent from the Animal League a few years ago, when the latter organization, which is concerned with lobbying efforts, merged with The Humane Society of the United States.

(Above image:  Doris Day with Alfred Hitchcock, from the website “The Films of Doris Day.”)
Posted by Andrew Lee Fielding at 4:32 PM

Though tonight (Wednesday) there will be a screening of The Poet Laureate of Radio: An Interview with Norman Corwin, by filmmaker Michael James Kacey (the interview was conducted in 2004), the Mid-Atlantic Nostalgia Convention officially begins tomorrow morning, and continues through Saturday, at the Marriott Hotel in Hunt Valley, Maryland.

Actor Van Williams, from television’s Green Hornet, will not be attending as scheduled, because of illness. Yet other movie and television performers will be appearing—such as Roy Thinnes (The Invaders), Dawn Wells (Gilligan’s Island), and Ed Nelson, (Peyton Place, The Twilight Zone). There will also be a number of presentations—about Phil Harris & Alice Faye, about The Lone Ranger, and about The Green Hornet. Dr. Wesley Britton, author of The Encyclopedia of TV Spies, will be speaking, as will Jack French, author of Private Eyelashes: Radio's Lady Detectives.

Both of the above books were brought out by BearManor Media. Here are amazon links for them:

Please note, as well: The Internet radio station “Radio Once More,” about which I’ve previously written in this space, will be broadcasting live from the convention, beginning Thursday morning. Neal Ellis, from the station, will be on-scene at the convention; his co-host Ken Stockinger will be joining him from New Jersey.