There was a piece on Monday's "NBC Nightly News," by reporter Rehema Ellis, about the S.S. United States:

The S.S. United States, in trouble

The ship--as has been the case before--is facing possible demise.  Here are two recent news stories:

Here, too, is the Facebook page of the S.S. United States Conservancy, the group which currently owns the ship, and which has for years been advocating on its behalf:

The radio show Your Hit Parade began airing in 1935.  In the summer of 1950, the show came to television; during the summer, there were four experimental telecasts of the program, on NBC.

The television show began airing regularly on NBC on October 7, 1950--65 years ago today.

My mother, Sue Bennett, became a part of the cast in early 1951. At first, she performed with singer Russell Arms, and others, in the show's "extravaganza" commercials for Lucky Strike; the commercials featured singing and dancing. She later became a featured singer on the program, and remained with the show until the close of the 1951-1952 season. 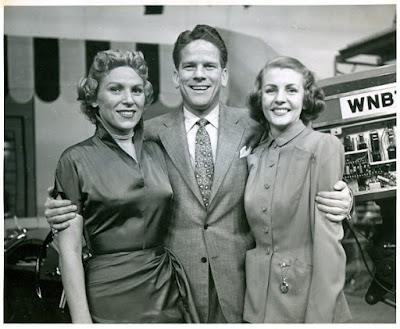 (Pictured:  Eileen Wilson, Snooky Lanson, and Dorothy Collins, the primary singing stars of Your Hit Parade from 1950 to 1952. Wilson left the program in 1952; Lanson and Collins remained until 1957. Collins also starred in a 1958-1959 version of the program, with singer Johnny Desmond.)
Posted by Andrew Lee Fielding at 8:59 PM