This is a photo from June, 1963 (or at least, that is the printing date, stamped at the top edge of the photo), taken in our family’s den. I am unsure, but believe it was taken by my brother, who the next month would turn ten. At the time, I was seven. 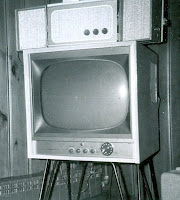 The photo (which is cropped, here) was probably intended to be a picture of a TV program in progress. I think I can make out the slightest suggestion of something on the screen, but I might be mistaken.

We had this TV set for years, and while I would not have recalled the set’s brand, it appears (if I’m reading correctly, at the lower left of the set) to have been a Magnavox. In the photo, my parents’ stereo sits on top of the set.

Looking at this picture, some time ago—looking at it closely for the first time in perhaps decades—I recalled the following: I remembered what turning the channel dial on the set felt like, the feeling of each channel clicking into place. I remember, too, quite clearly, the feeling of turning the dials on the stereo (which included, as I recall, dials for treble and bass), and hearing the changing nature of the sound, as a result.

"The Time Tunnel: A History of the Television Series," by Martin Grams, Jr.

A favorite television program, during childhood, was ABC's time-traveling series, The Time Tunnel, which aired in 1966 and 1967.

Martin Grams, Jr., well-known for the many books he has written about old-time radio and classic television series, has just brought out a book about The Time Tunnel; it is published by BearManor Media.

Two of the featured guests at this year's Mid-Atlantic Nostalgia Convention (which is run by Martin Grams, and by his wife Michelle), will be the primary stars of The Time Tunnel, Robert Colbert and James Darren.

The convention will be taking place from August 9-11, in Hunt Valley, Maryland.

Recommended Reading: "I Was Amelia Earhart," by Jane Mendelsohn

July 2nd (last Monday) was the 75th anniversary of the date, in 1937, when Amelia Earhart's plane went missing.

The day after the anniversary, an expedition began, to the island of Nikumaroro, in the Republic of Kiribati.  The wreckage of Earhart's plane is being sought, in the waters off the island.

(As the story below notes:  "Richard Gillespie, executive director of The International Group for Historic Aircraft Recovery (TIGHAR), theorizes Earhart's plane was washed off the reef by surf days after Earhart and her navigator, Fred Noonan, landed on Nikumaroro, about 400 miles southeast of their Howland Island destination.")

Because of the 75th anniversary, and the new expedition, I decided to re-read a book I first read (and first enjoyed) several years ago:  the 1996 novel I was Amelia Earhart, by Jane Mendelsohn.

The book is beautifully imagined, with a lovely, rich and moving sense of voice  (or, voices; it is written in both the first and third person). 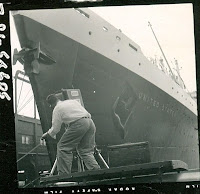 The historic passenger ship, which went out of service in 1969, has been docked on the Philadelphia waterfront since the 1990s.

As I have noted, in previous posts, the S.S. United States plays a part in my book about early television.

On June 28, 1952, five days before the ship's maiden voyage, the last telecast of Your Hit Parade, for the 1951-1952 season, took place on the ship. (It was my mother's last appearance on the program.  She sang the song "I'm Yours" from the ship's wheelhouse.)

The S.S. United States Conservancy is an organization devoted to the ship's preservation. The group took ownership of the ocean liner in 2011, with the assistance of Philadelphia philanthropist H. F. "Gerry" Lenfest. 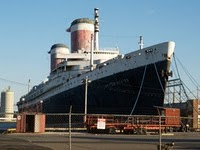 For more information about the Conservancy (and to learn more about the ship, and its history), please click on the following link:

"Maverick: Legend of the West"

Writer, commentator, and radio host Ed Robertson recently came out with a revised edition of his 1994 book about the television series Maverick.

The book, Maverick: Legend of the West, was published in May.

Here is the book’s amazon.com page:

Robertson, who is a friend, has also written books about the television programs The Rockford Files and The Fugitive.  He is interviewed often about television-related matters, and is (as noted previously in this space) the host of the weekly radio talk show TV Confidential.

More about Ed Robertson can be found at this link: http://www.edrobertson.com/.
Posted by Andrew Lee Fielding at 8:33 PM