The cover price of The Lucky Strike Papers is $24.95. For a limited period of time, the book (which is softbound) is being offered, via my web site, for $18.95. Media Mail shipping, with Delivery Confirmation, is included.

To order the book, please go to: http://www.luckystrikepapers.com/
Posted by Andrew Lee Fielding at 8:37 PM

While my book concerns the early years of television—largely covering the period 1949 until 1952—it also concerns family history: my late mother’s relationship to the era.

Though her first appearance on TV took place near the end of 1948—she sang, as a guest, on a show on CBS-TV (at the time, she had a singing role in a Broadway revue)—her career in television really began in 1949.

1949 was also the year my parents met one another. When they married, later that year—sixty years ago today—my mother was twenty-one, and my father was twenty-eight. My father is now 88; my mother passed away in 2001, at age 73.
Posted by Andrew Lee Fielding at 1:26 PM 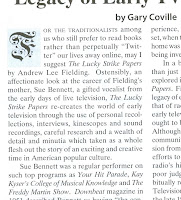 A very kind and generous review of The Lucky Strike Papers, written by Gary Coville, appears in the August issue of Radiogram.
Radiogram is the magazine of the well-known California-based OTR organization SPERDVAC (the Society to Preserve and Encourage Radio Drama, Variety and Comedy). The magazine is edited by Dr. Patrick Lucanio. (image of the beginning of the review appears above)
Posted by Andrew Lee Fielding at 3:24 PM

During a recent on-air conversation I had with Dave White, host of the Internet radio show “Dave White Presents” (http://audioentertainment.org/), he spoke of early television as being a “work-in-progress.”

It was, I thought, a very apt way of describing the era.
Posted by Andrew Lee Fielding at 3:22 PM

On August 27th, from 4-5 p.m., I'll be appearing on a panel of authors at the Mid-Atlantic Nostalgia Convention.

The convention will be taking place from August 27th to August 29th, at the Clarion Hotel in Aberdeen, Maryland.

Martin Grams, Jr., who is one of the organizers of the convention, and who has written many books about old TV and radio shows, will be on the panel. His books include: "The Twilight Zone: Unlocking The Door to a Television Classic" (2008); "Car 54, Where Are You?" (2009); books about the radio shows "Inner Sanctum Mystery," "Suspense" and "Information, Please" (2003, 1998 and 2003, respectively); and a number of others.

Linda Alexander, the author of a book about the actor Robert Taylor ("Reluctant Witness: Robert Taylor, Hollywood, and Communism," 2008), will also be on the panel--as will James Rosin, whose latest book is "Adventures in Paradise: The Television Series" (2009). He has also written books about the "Wagon Train" and "Route 66" television programs.
Posted by Andrew Lee Fielding at 6:40 PM 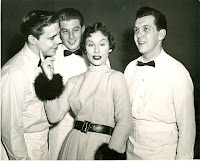 This is an addendum to the 8/2/09 posting, below, which noted the recent passing of Charles Bean, of Duxbury, Mass., who performed on my mother’s 1950s Boston TV program, The Sue Bennett Show.
I sent the link for the posting to one of Charles Bean’s sons, Christopher. I learned, as a result, that Charles Bean, who played the trumpet, had in fact not performed in the show’s musical ensemble, as I had assumed, but had been one of the singers in the TV show’s vocal group, “The Freddy Guerra Trio.”
Visiting Boston several days ago, to see my father, I found a picture of Charles Bean, in a drawer containing a number of old photographs (see photo, above; photo by WBZ-TV). In the photograph, which is probably from 1954, Mr. Bean is standing behind my mother. To the left of the picture is singer Joe McPherson. Joe McPherson passed away in 1994, at age 61; he had remained a singer until the end of his life. To the right of the picture is Freddy Guerra.
In addition to being a singer, Freddy Guerra was a clarinetist and a saxophonist (and, through the years, a popular bandleader in New England). Guerra is known to fans of Glenn Miller as having been a musician in Miller’s Army Air Force band, during World War Two. He passed away in 2003, at age 79.
Posted by Andrew Lee Fielding at 7:41 PM

On Tuesday (August 11th), the United States Postal Service will release a set of stamps about historic television shows, many from the late 1940s and early 1950s.

The stamps make up the "Early TV Memories" series.

In some ways, we live in an age of repetition.

VCRs/DVDs/TiVo: they have allowed us to watch TV shows and movies at our leisure, on our own schedule—and watch them as often as we want.

YouTube, of course, is popular for its relatively brief videos—videos which many people, certainly, watch again and again.

I don’t know how many times I have seen the video of Susan Boyle’s first performance on “Britain’s Got Talent”—probably twenty or thirty times. The performance has repeatedly brought me to tears. I watched it again a few days ago, and was, once again, very moved. I didn’t well up this time, though. Perhaps I have seen it too many times.

(I think of an instance of repetition, from childhood--1964, 8 yrs. old: listening to the 45 of “I Want To Hold Your Hand,”and “I Saw Her Standing There,” its flip side, over and over, on the record player. I listened to the songs for hours. The pleasure was not just in the listening, but in the repetition: being able to hear the songs again and again.)

CNN has of course changed the ways the news is watched; one can now see the news at most any time, via certain cable stations. Yet it is not simply availability which is different: I think there has also, to an extent, been an effect on how the news is perceived.

A dramatic news story will appear on a cable channel. Hour after hour, the story is retold: you hear many of the same details, repeatedly see certain pieces of video.

And I have noticed—it is a sad thing to feel this—that there have been some news stories, serious stories, sometimes very sad or tragic ones, which, after just a few hours of repetition, start to overwhelm; they become (at least a little bit) tiring. Stories of consequence, stories of tragedy, or mortality, should not be tiring—yet relentless repetition, hour after hour, can affect the ability to feel, deeply. It is one of the peculiar and unfortunate dividends of our era.

(There is also the unusual nature of “Seinfeld,” in which repetition does not seem to matter very much. Like millions of others, I have no doubt watched each episode scores of times, know the punch-lines and the dialogue of most of the episodes—and yet, look forward to seeing the show every day. I suppose “Seinfeld” is not unlike a song you enjoy. You know all the lyrics, know every musical phrase and nuance, and just like to listen repeatedly. )

Which brings me, briefly, to early television, when most programs were shown live (there were some filmed programs in early TV, but they were the exception).

In early TV, live shows were not repeated. Repeats, as an entity, did not exist.

From 1949 to 1950, for example, when my mother sang on Kay Kyser’s show on NBC, the program's live telecast reached about halfway across the country; the coaxial cable linking the entire country had not yet been put into place. The rest of the country saw the show a week or so later, via kinescope—a primitive film of a program, made by positioning a 16mm camera in front of a TV monitor, while the show was telecast live.

After the live telecast, and then the airing of the telecast’s kinescope in the regions of the country which had not been able to see the program live, the show was not seen again.

I am sure this absence of repetition added to the attraction of early TV—a show appeared, and it was gone. You knew you had only one chance to see it.
Posted by Andrew Lee Fielding at 2:51 PM

I recently came upon the following story, on the Internet:

It is an obituary, from March, about Charles A. Bean, from Duxbury, Mass; he had passed away at age 83. I had unfortunately not been familiar with Mr. Bean’s name. He had been a musician (he played the trumpet), and a teacher, in the Boston area; in the late 1950s he had also begun a music store/company, which, the obituary noted, had subsequently expanded into five locations—in Massachusetts, Rhode Island, and Florida.

The obituary also noted this: “During the 1950s he entertained weekly on the Sue Bennett Show in the early days of Boston television.” The show aired on WBZ-TV in 1954 and 1955; as noted previously in this space, the program featured my mother’s singing, a vocal group which often accompanied her (The Freddy Guerra Trio), and a small musical ensemble, which, obviously, Mr. Bean had been a part of.

From reading the obituary, it sounded as if Mr. Bean was a fine man, who led a very interesting and very productive life. I wish I had been able to meet him.

Please note a follow-up post, which appeared on August 15, 2009, and which includes a correction to the above post: