My mother, as described in my book (and as noted previously in this blog), was a featured singer on NBC-TV's Your Hit Parade, in 1951 and 1952.
During her time on the show, there were, in essence, two tiers of featured singers. There were the show’s primary vocalists, as seen in the photo below, from a 1951 TV magazine: Dorothy Collins, Snooky Lanson, and Eileen Wilson. The second tier of singers, who were featured less prominently, consisted of my mother and Russell Arms. 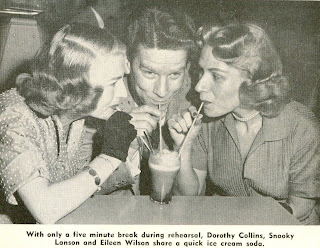 These two tiers were reflected in a 1952 listing in a Pittsburgh magazine, TV Digest: 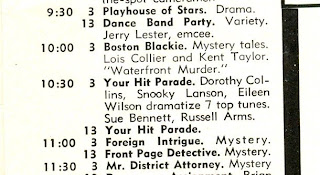 Russell Arms became one of the show’s primary stars in the 1952-1953 season.  The singers, that season, were Collins, Lanson, Arms and June Valli. In the fall of 1953, Valli was replaced by Gisele MacKenzie. Lanson, Collins, Arms, and MacKenzie remained with the TV program until 1957, and became the group of singers most associated with the show.
Posted by Andrew Lee Fielding at 5:04 PM

An extremely kind review of my book appeared on April 7th, on the website “Television Obscurities” (http://www.tvobscurities.com/).
The review says, in part: “I had no expectations prior to starting [the book], and no real idea of who Sue Bennett was, but after finishing it in late March I can say without hyperbole it was one of the best works on early television I have ever had the pleasure of reading. Fielding has done a remarkable job capturing a time period when television was new, broadcasts were live and those working in the medium were learning on their feet.”
The review says: “Fielding’s writing style can take some getting used to. He has a tendency to shift topics with brusque sentences, often introduced through an object, a kinescope, a television magazine, something connected to his mother’s past.”
Yet the reviewer also writes: “The Lucky Strike Papers is not a biography of Sue Bennett. At times, her name may not be mentioned for dozens of pages as Fielding delves into the production of Your Hit Parade. While this might seem somewhat curious, recall that the subtitle to Fielding’s work is not ‘Journeys Through My Mother’s Past’ but ‘Journeys Through My Mother’s Television Past.’ What he has accomplished with The Lucky Strike Papers is something more than a biography. Fielding has crafted a narrative unlike any other I have read, one that uses his mother’s television career as a focal point for a fascinating examination of the medium, one that relies on first-hand accounts, reviews, photographs and viewings of kinescopes.”
The full review can be found here: http://www.tvobscurities.com/2010/04/bookshelf-the-lucky-strike-papers/
Posted by Andrew Lee Fielding at 3:19 PM

The following video, made from a 1954 kinescope of the Perry Como TV show, is of Como singing “Papa Loves Mambo":

He’s accompanied by The Ray Charles Singers, who for years were an important part of his shows (TV, and otherwise), and his records.

The vocal performances are enjoyable. There are also some other nice moments in the video (such as, when Como dances with singer Peggy Lee).

In the 1950s, while Ray Charles was part of Perry Como’s show—arranging the vocals for and overseeing his Ray Charles Singers—he was also the vocal arranger on Your Hit Parade. Charles—often referred to as the other Ray Charles—is interviewed in my book about his work in early television.

Many television viewers, today, are no doubt familiar with Charles’s voice, from the 1970s and 1980s TV show Three’s Company; he and Julia Rinker sang the show’s theme song.
Posted by Andrew Lee Fielding at 4:24 PM