James Leavelle was a part of one of the country's most historic moments--and one of the world's most memorable and historic photographs.

In 1963--wearing a white Stetson and a tan suit--Mr. Leavelle was one of the Dallas detectives escorting Lee Harvey Oswald, in the basement of the Dallas Police Headquarters, when Oswald was shot by Jack Ruby.  Oswald was handcuffed to Mr. Leavelle, when he was shot.

The remarkable photograph of the shooting--which was awarded a Pulitzer Prize--was taken by Bob Jackson, of the Dallas Times Herald.

Mr. Leavelle died on Thursday; he was 99 years old.

Here is an obituary of Mr. Leavelle, from the New York Times:

The image, below, is of the front page of the New York Daily News, from Monday, November 25, 1963, the day after Oswald's death. 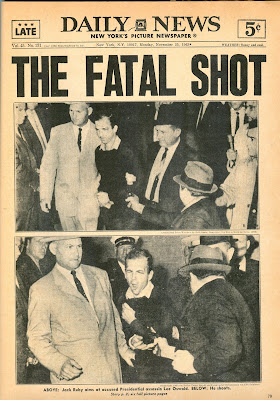 The photograph at the bottom of the Daily News page is the Pulitzer-awarded picture by Bob Jackson. The striking, dramatic picture above it, taken as Ruby approached Oswald, was by Jack Beers, of the Dallas Morning News. Mr. Leavelle is at the left, in each photo.

Both pictures have often been cropped, in varying ways, when seen in newspapers, magazines, books, or on television.

Below, for example, is a much wider view of Bob Jackson's photograph, as seen at the center of the front page of The Scranton Tribune: 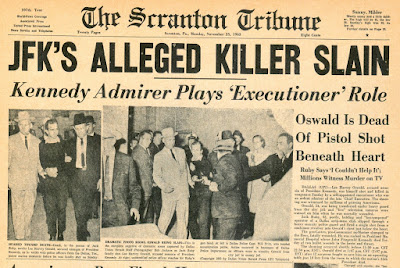 And this is a broader view of the photograph by Jack Beers: 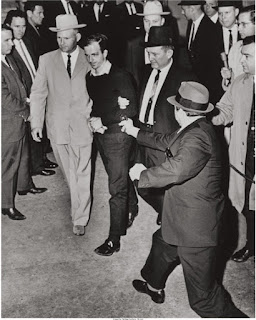 Two years ago today (August 12, 2017), the two-day "Unite the Right" rallies in Charlottesville, Virginia, attended by neo-Nazis, white supremacists, Klan members, and others from the far-right, culminated in the murder of Heather Heyer, age 32, a counter-protester.

The act of terrorism which killed Ms. Heyer (and injured many others) remains a deeply sad and terrible moment in America's history.

I have mentioned, in previous posts, that I lived in Charlottesville--a beautiful, wonderful city--for several years. I moved there in 1995, to host a radio program; the program ended in 1997, but I stayed in the city until the beginning of 2001.

I think about Charlottesville often.  There are a great many things I enjoyed about living there--including getting to know (because of the radio program) a number of the city's excellent print and broadcast journalists.

One was Hawes Spencer, who during my time in the city was editor of a popular Charlottesville newspaper, the C-Ville Weekly.  He later founded and edited another local weekly, The Hook.  More recently, as a Charlottesville-based freelance writer, his byline has appeared in the New York Times, the Daily Beast and other publications.  He also reports for Virginia public radio, and teaches journalism at Virginia's James Madison University.

In 2018, he brought out an impressive book about what took place in Charlottesville in 2017, titled Summer of Hate: Charlottesville, USA (University of Virginia Press).

Forty-five years ago today, Richard Nixon's presidency ended.  During a televised speech, the night before, he had announced he would be leaving office the next day.
Posted by Andrew Lee Fielding at 12:06 PM