Both concern a show my mother had hosted the night before on Boston's WBZ-TV (Channel 4)--a special called "Summertime," which, as the Herald story noted, "highlighted the music and dances of the 20's."


In addition to my mother, the show featured The Frank Petty Trio, banjoist Victor Mondello, The Play-Tonics (a barbershop group), and the New England Civic Ballet Company. The show, telecast on a Wednesday evening, aired from 10:30 to 11:00 p.m.

Wrote Bill Buchanan, in the Daily Record:  "Miss Bennett is quite a polished television performer and she made a delightful host, in addition to singing a few songs herself."

By 1961, my mother had been seen on Boston television for a number of years.  After my parents left New York for the Boston area, at the start of 1953, she initially sang for a time on a daily Boston radio show, Beantown Varieties, on station WEEI-AM; its host was Carl Moore. (She was, at the time, pregnant with my brother, my parents' first child.) In 1954 and 1955, she had her own weekly musical show on WBZ-TV, The Sue Bennett Show.  In 1956 (the year I was born), she was co-host (with WBZ personality Rex Trailer) of a morning program on the station, Morning Play House, airing after the Today show--and from 1958 until the end of 1960 she had been host of a weekly movie show, Cinema 7, on Boston station WNAC (Channel 7).

For many years, in Boston--as in so many other cities--local programs were a key part of the television schedule.

On Boston TV, there were a number of extremely popular local children's shows, entertainment and variety programs,  movie shows, interview programs, and others.

Whatever became of local TV programming? 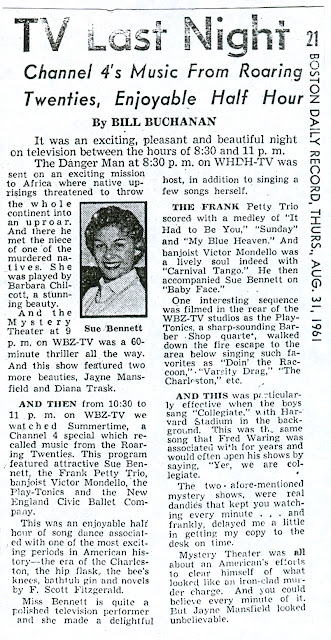 Here is a photograph, from NBC-TV, of bandleader Freddy Martin, with his orchestra; the picture is currently for sale on ebay.

The auction also includes a press release about Martin's 1951 NBC television program, which accompanied the picture; it is also seen below. 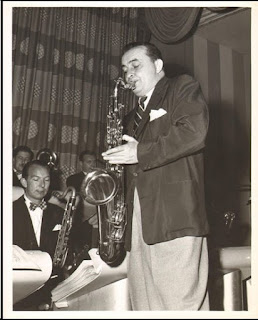 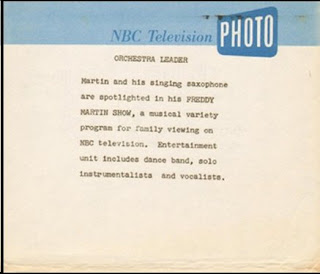 The legendary ocean liner could be sailing again. Here is a story from The Philadelphia Inquirer: