A very nice review of my book has appeared on Billy Ingram’s popular website, TVparty.com.

The review says, in part: “In the world of books about classic television there aren't a lot of original ideas. Profile some shows and try to provide some fresh insight, that's pretty much the standard.
“But a book I'm reading now - The Lucky Strike Papers - is truly unique. It's Andrew Lee Fielding's archeological dig into the career of his mother, Sue Bennett, a popular singer on early TV programs like Your Hit Parade, The Freddie Martin Show, and Kay Kyser's Kollege of Musical Knowledge.”
Later in the review, Mr. Ingram writes: “It's not a tightly told story, meandering and going off on tangents, but that's one of the aspects I liked about the book.”
He also writes that it “would be a terrific book to take on vacation.”
To read the full review on TVparty’s books page, please click on the following link:

http://www.tvparty.com/bookstore.html
As of this writing, the review appears in the center column of the page.
Posted by Andrew Lee Fielding at 3:35 PM

A couple of days ago I came upon a website about singer and actress Dorothy Collins; the website was recently created by her three daughters (Deborah, Elizabeth, and Melissa).
http://rememberingdorothycollins.com/
In addition: a CD featuring vocals by Collins was brought out in January, by Jasmine Records, a London label.  Her daughters contributed to the CD’s liner notes, and also contributed photos (see cover of CD, below).
http://www.amazon.com/gp/product/B0030MNR8W/sr=8-1/qid=1274032479/ 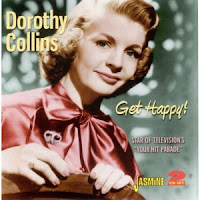 Collins starred for years on TV’s Your Hit Parade, was later one of the stars of the TV show Candid Camera, and in the early 1970s was nominated for a Tony Award for her performance in the Broadway play Follies.
She is interviewed in my book. We spoke in 1979, while she was appearing in a summer stock production, at Cape Cod’s Falmouth Playhouse. Because of asthma, she retired the following year. She passed away in 1994, at age 67.
Posted by Andrew Lee Fielding at 9:02 PM

To the left: the cover of my friend Mel Simons’ latest book, The Movie Trivia Book.

Mel is a Boston-based entertainer, and has for many years been a regular guest on Boston’s WBZ Radio. He has written several books, all of them published by BearManor Media; The Movie Trivia Book came out a few months ago.

I have previously written, in this space, about the Internet radio station “Radio Once More,” which went on the air at the start of 2010—and have written in particular about the station's “Live Show,” which airs Monday/Wednesday/Friday/Sunday nights. The show is part talk show, and part entertainment program:  it features conversation, as well as radio broadcasts from the 1930s, 1940s, and 1950s.  Its hosts are Neal Ellis and Ken Stockinger. (see: http://www.radiooncemore.com/)

Last week, at the 24th gathering of the Cincinnati Old Time Radio and Nostalgia Convention, Ken Stockinger was awarded the convention’s Parley E. Baer Award, named for the noted radio and television actor.

Parley Baer appeared on such radio shows as Gunsmoke, Lux Radio Theatre, and Yours Truly, Johnny Dollar, and on television programs such as The Andy Griffith Show, The Adventures of Ozzie & Harriet, and The Addams Family.  He passed away in 2002, at 88.

The award was created by Terry Salomonson, the OTR researcher and author, and was first presented in 1997. Past recipients include Ken Stockinger’s on-air partner on the "Live Show," Neal Ellis; author Martin Grams, Jr.; and Bob Burchett. Burchett founded (and runs) the Cincinnati Old Time Radio and Nostalgia Convention. He also edits Old Radio Times, the publication of the Old Time Radio Researchers group.

The citation accompanying Ken Stockinger’s award reads: “In Recognition of His Continuing Exemplary Efforts in Supporting the Preservation And Enjoyment of Radio History.”
Posted by Andrew Lee Fielding at 2:40 PM

Below is a photo, from the Sunday magazine of the newspaper The Boston Post.  It is from a 1954 article about my mother, not long after she had begun her weekly television show, The Sue Bennett Show, on Boston's WBZ.  In the picture she is holding my brother, Jed, who was seven months old.

The Sue Bennett Show, which aired in 1954 and 1955, was a musical program. In addition to my mother's singing, the show featured a vocal group, The Freddy Guerra Trio. 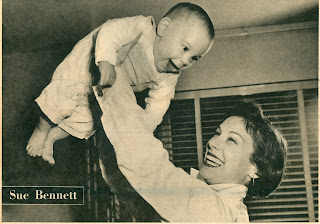 The day after President Kennedy was killed, I took this photograph of The Boston Globe, at our house in suburban Boston. (The final word in the headline, not fully visible, is “Grief.”)  At the time, I was seven.
I wrote briefly about this picture, and Kennedy’s death, in The Lucky Strike Papers. 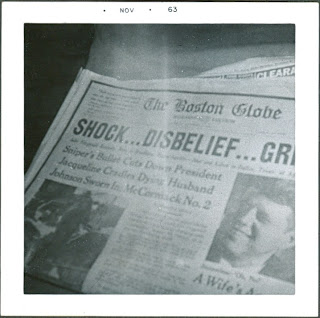 Perhaps you are familiar with the following words:

"And I thought about it, and I gave it a great deal of thought, Grandpa."

They were spoken in 1963 by actress Helen Wagner, on CBS's As The World Turns. As she said the word "Grandpa," the broadcast was interrupted by a CBS News bulletin. Walter Cronkite's voice was then heard; he reported the shooting of President Kennedy, in Texas. 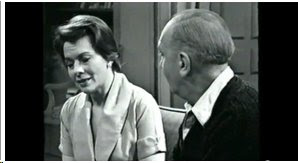 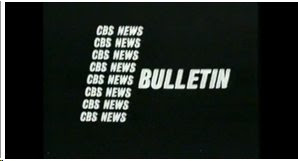 Wagner, who appeared on As The World Turns for decades, died on Saturday, at 91.  Here is a story about her death, and her career:
http://news.yahoo.com/s/ap/20100503/ap_en_tv/us_obit_helen_wagner
Here, too, is a YouTube video of the As The World Turns broadcast, in 1963.  Wagner's words, preceding the bulletin, take place at 9:54.
http://www.youtube.com/watch?v=LkClBXfuBMs

If you are unable to go directly to the end of the video, the following is an audio portion, a little more than a minute long, which begins shortly before the news bulletin: