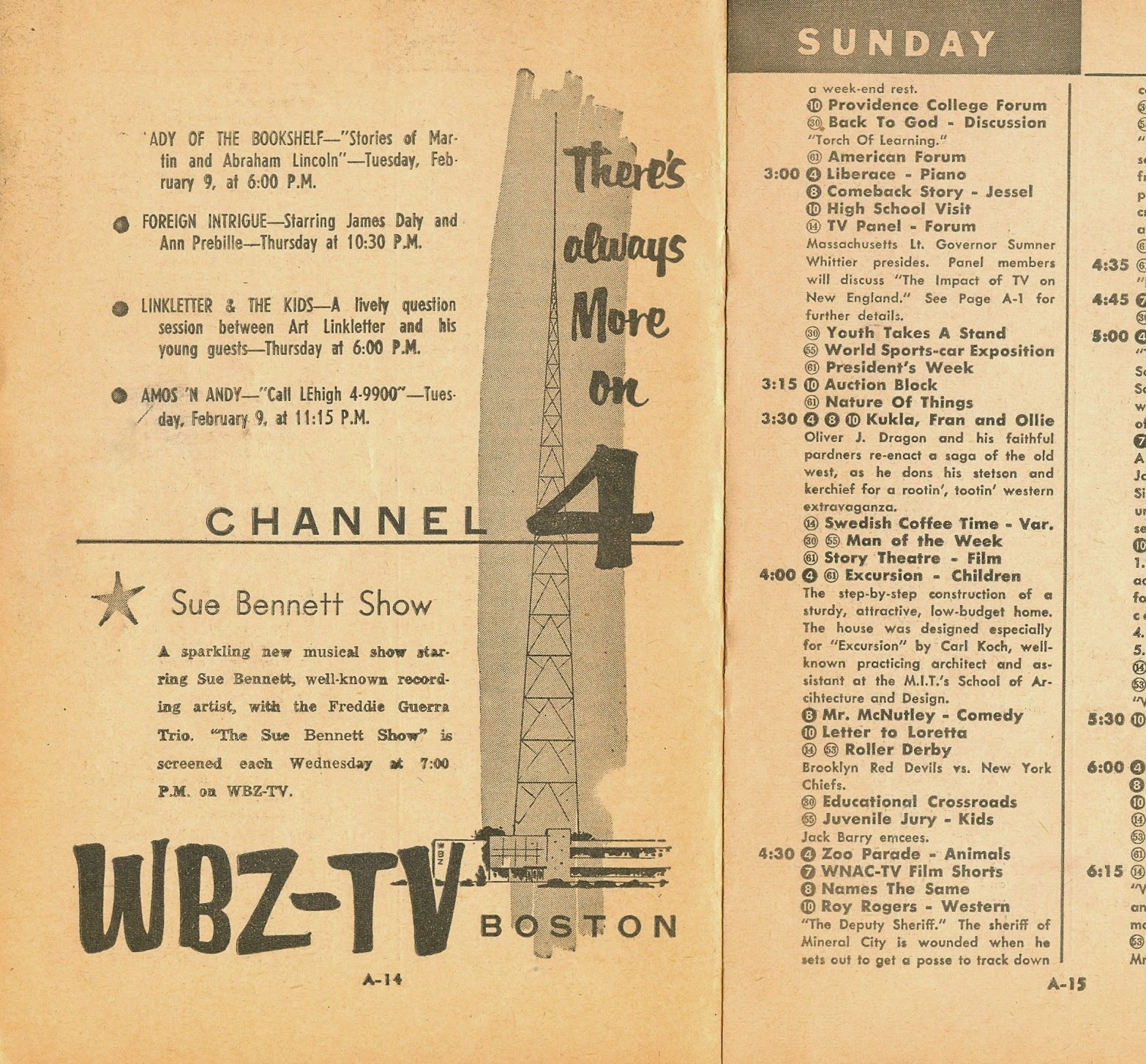 This is an advertisement from the February 5-11, 1954 issue of TV Guide (the New England edition).

The ad refers to my mother's new weekly musical show on Boston's Channel 4, WBZ-TV; the program aired until the spring of 1955.  The show was fifteen minutes long, and featured my mother's singing, as well as the singing of a vocal group, The Freddy Guerra Trio.

In addition to his work as a singer, Mr. Guerra was a saxophonist and clarinetist, and played, notably, with Glenn Miller's Army Air Force Band, during World War Two.  Later, for many years, he was a prominent bandleader in the Boston area.  (Mr. Guerra's first name was sometimes spelled "Freddie," as in the TV Guide advertisement. The other spelling appeared in a newspaper advertisement, below.)

Here is a newspaper story about Mr. Guerra, following his death in 2003:

"Inside USA with Chevrolet," additional picture

This is another photograph from the magazine article, referred to in the prior post, about Peter Lind Hayes and Mary Healy, and their early television show Inside USA with Chevrolet (1949-1950, CBS-TV). 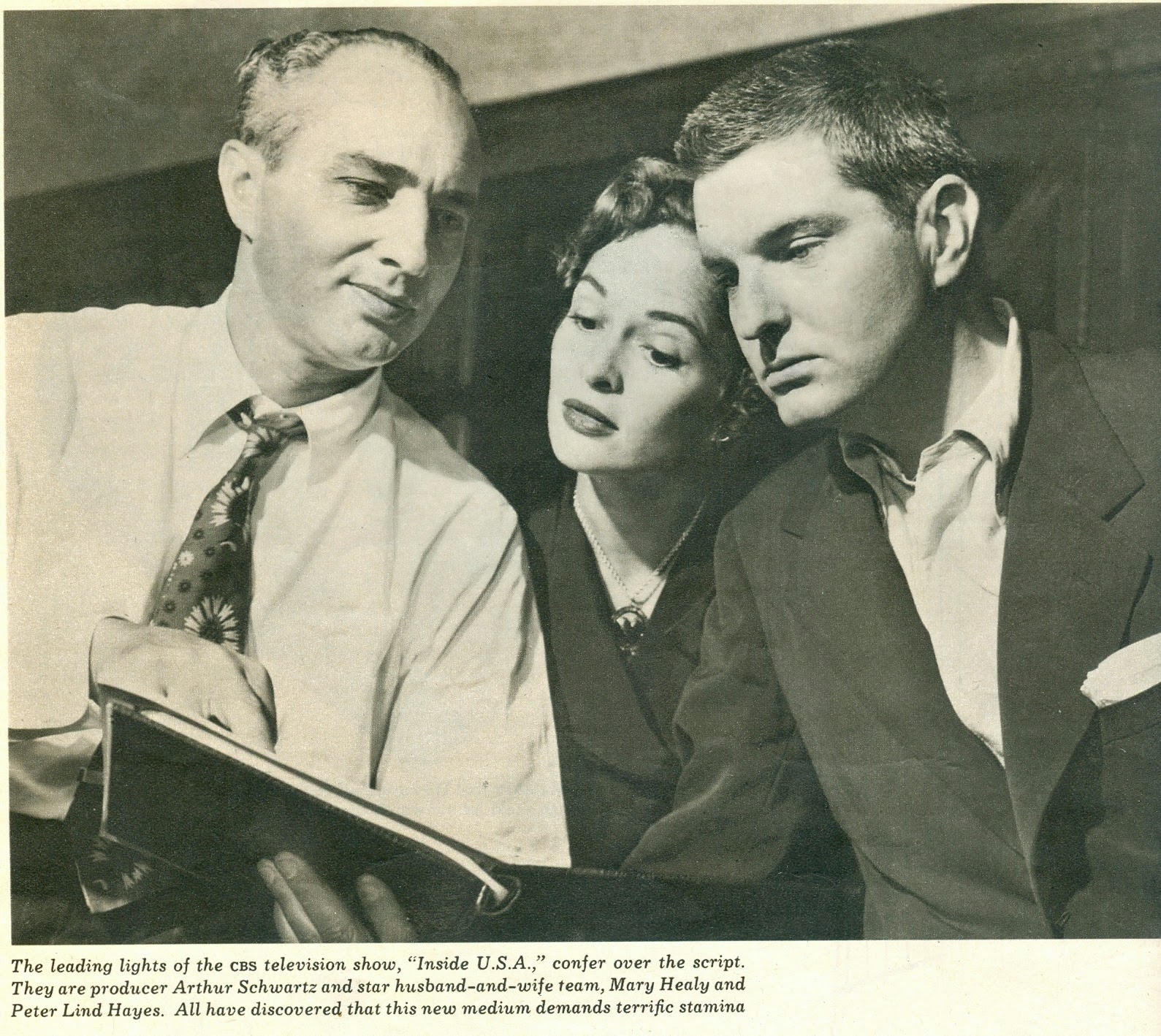 The picture features, left-to-right, the television show's producer (and the noted composer) Arthur Schwartz; Mary Healy; and Peter Lind Hayes.  As the caption notes, of Schwartz, Healy, and Hayes:  "All have discovered that this new medium demands terrific stamina."

(As noted in the previous post, I do not know who took the magazine story's photographs.)

Actress and entertainer Mary Healy died on February 3rd, at 96.  She and her late husband, Peter Lind Hayes, were a popular performing team--which included working in early television (and beyond).

There are a handful of people I regret not interviewing, for my book about early television.  Two of them were the talented and likeable Mr. Hayes and Ms. Healy.

My mother was involved, briefly, with one of their shows (Inside USA with Chevrolet), and later made a guest appearance on another (Star of the Family).

I would like to have spoken with them in particular about Inside USA. The show, which featured music, comedy, and dance, was a travelogue program, of sorts, about America, and aired every other week. In addition to Mr. Hayes and Ms. Healy, the program featured actress Mary Wickes, and dancers Sheila Bond and Danny Daniels.  Guest stars on the show included Lucille Ball, Oscar Levant and David Niven, and the show's producer was the prominent songwriter Arthur Schwartz; with lyricist Howard Dietz, he composed such songs as "Dancing in the Dark," and "That's Entertainment."  Mr. Schwartz had also been the producer of the 1948-1949 Broadway musical revue Inside USA, which had been derived from the John Gunther book of the same name. 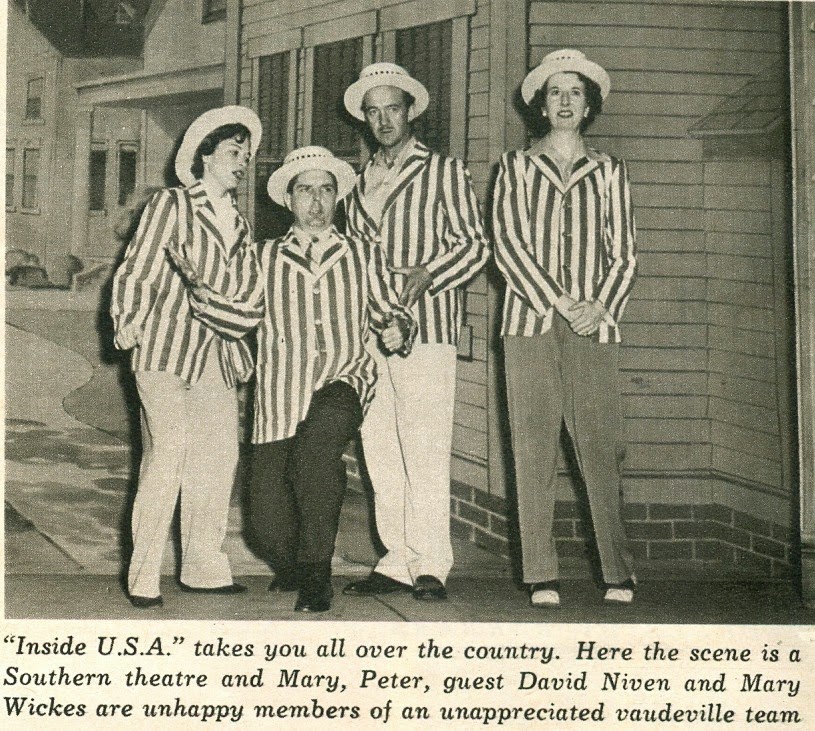 The television show went on the air in September of 1949; my mother became a part of the show not long afterwards.  She sang with the show's vocal group, overseen by vocal arranger and singer Ray Charles (often called the other Ray Charles). The Ray Charles Singers were featured in production numbers on the show, and sang the program's Chevrolet jingle, "See The USA in Your Chevrolet."

My mother left the program at the end of November, that year, to become one of the featured singers on bandleader Kay Kyser's new TV show on NBC.

In 1952 she appeared as a guest on the Hayes and Healy show Star of the Family. This was a couple of days before her last appearance on Your Hit Parade.  Star of the Family featured not only entertainers, but members of their families, who were interviewed.  My father appeared on the show, and spoke with Mary Healy about my mother's career.  The other guest entertainers on the episode (which was, as it happens, the last broadcast of the series) were comedian Jack E. Leonard, and singer Bill Kenny, of The Ink Spots.

Here is the amazon link to a book by Mr. Hayes and Ms. Healy, about their show business careers; it was brought out in 2004. 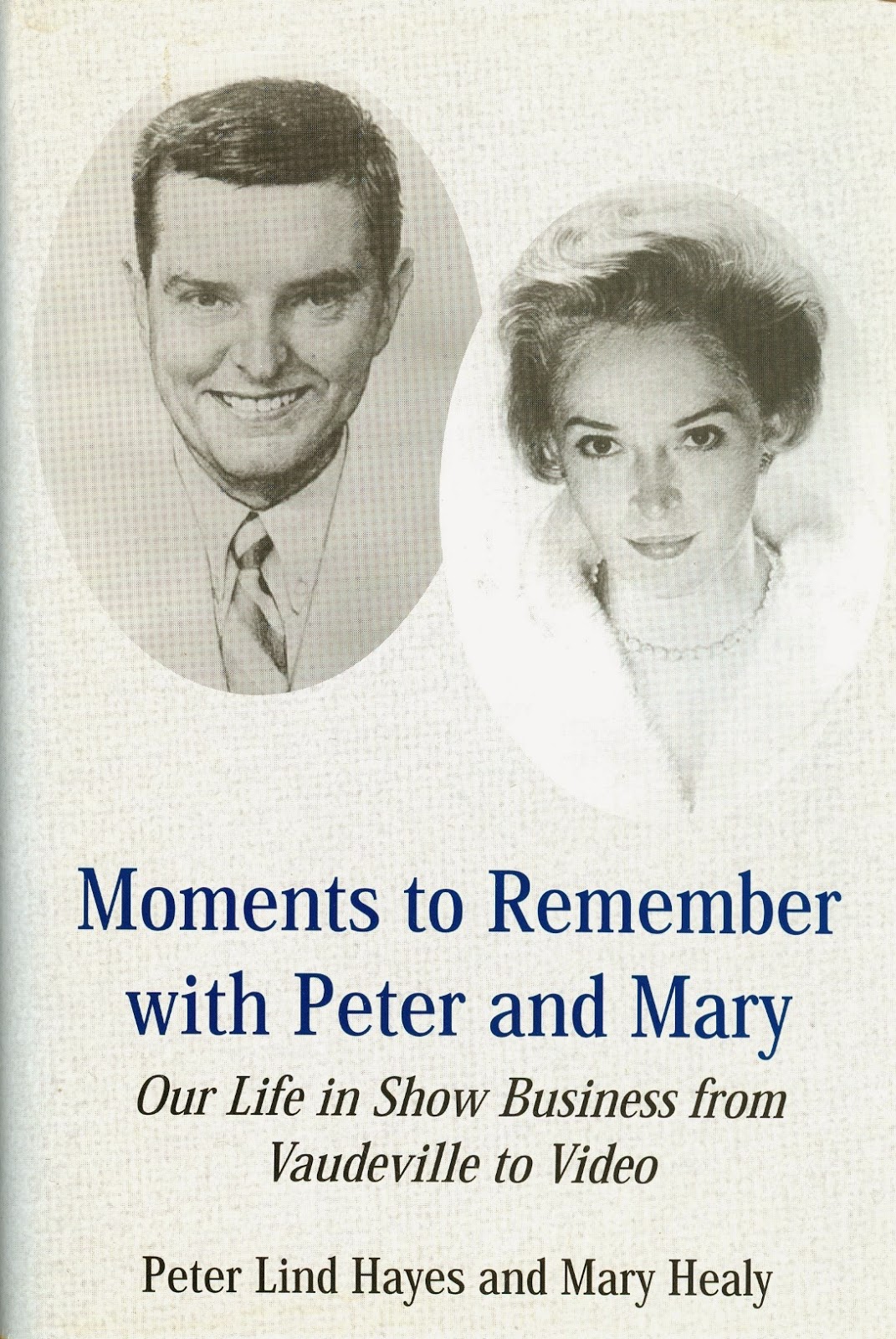 (The photograph, above, is from a magazine story about Inside USA with Chevrolet, either from 1949 or 1950, and features, left-to-right, Mary Healy, Peter Lind Hayes, guest star David Niven, and Mary Wickes.  I got the article on ebay, some time ago--simply the article, not the full magazine--and do not know what magazine the story was from; I also do not know who took the photograph.)
Posted by Andrew Lee Fielding at 4:53 PM