The cover price of The Lucky Strike Papers is $24.95.  The book (published in softcover) currently sells on amazon.com for $22.45.

To order a copy of the book, for the price of $21 (which includes Media Mail shipping, with Delivery Confirmation), please click on the following link, from my website.  Payment can be made either via paypal, or by check.

An additional note about George David Weiss, whose death was noted in the prior post:

Here is the scene in the film during which Elvis sings the song.  (The song begins about twenty seconds after the start of the video.)

"Can't Help Falling in Love" was written by Mr. Weiss, Hugo Peretti and Luigi Creatore. Its melody was based on the French song from the late 1700s, "Plaisir d'amour," by composer Jean Paul Egide Martini.
Posted by Andrew Lee Fielding at 5:48 PM

In my post of August 22nd, I wrote of my mother's April, 1952 appearance as guest vocalist on the Hit Parade radio show, on NBC. This was during the time she was a featured singer on the Hit Parade television program.

The number one song on the Hit Parade that week was "Wheel of Fortune." The song was a hit, at the time, for the singer Kay Starr.

Songwriter George David Weiss, who co-wrote "Wheel of Fortune" (with Bennie Benjamin), died this week.  He was 89.

Among Mr. Weiss's other hits was the very beautiful 1960s Louis Armstrong song, "What a Wonderful World."  Mr. Weiss co-wrote the song with Bob Thiele.

Some time ago, in this space, I posted a video of a lovely Louis Armstrong performance of "What a Wonderful World." Here is the video, again :

Here, too, is a brief audio segment of my mother singing "Wheel of Fortune," on the Hit Parade radio broadcast, in 1952.  The radio show starred bandleader Guy Lombardo.

Mr. Kean, who recently passed away at age 85, played a key role in the production of The Howdy Doody Show.

The program, originally known as Puppet Playhouse, began airing on television at the end of 1947.

As the New York Times obituary notes (see link, below), Mr. Kean was the show's chief writer, co-wrote (with star Buffalo Bob Smith) the lyrics to the program's famous theme song, and named such characters as Clarabell the Clown, and Princess Summerfall Winterspring.  The obituary also notes:  "He once said that he was probably best known for coining the word 'cowabunga' (originally spelled with a 'k') as a greeting for Chief Thunderthud, a character on the show."

I found this nice video (actually, a video made from a kinescope) of Helen O’Connell on YouTube. Someone who left a post beneath the video says it is from 1953, and the CBS-TV show TV’s Top Tunes. The show, that year, also featured singer Bob Eberly (who appears in a longer version of the same video, also available on YouTube), and the Ray Anthony Orchestra. 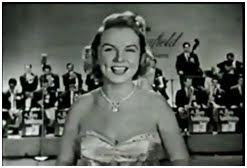 And also this, about Helen O’Connell:

Yet (it interests me to note), O’Connell’s May, 1952 appearance on the radio show took place the week after my mother appeared on the program; my mother had also appeared as the show’s guest vocalist on a January, 1952 broadcast. Her April 24, 1952 appearance took place on the show’s 17th anniversary broadcast, which aired from the United States Naval Hospital, in Chelsea, Massachusetts.

Here is a page of the script from the end of the April, 1952 program—and it is noted (by Guy Lombardo, and announcer Kenny Delmar) that Helen O’Connell will be appearing on the show the following week, from Fort Monmouth, in New Jersey. 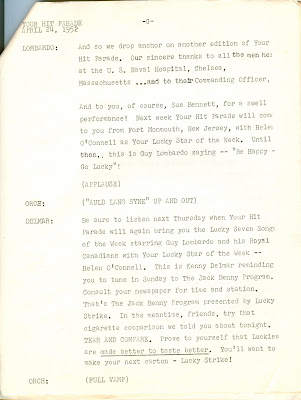 Howard Green, of North Hollywood, California, e-mailed me today about the previous blog entry. He told me that the singer in the Wikipedia picture was (to my surprise) the well-known vocalist Helen O’Connell.

I would not have figured this out. I had a different image, in my mind, of how O’Connell looked—probably from appearances she made on television much later in her career, in the 1970s.

Yet here is an additional picture of O’Connell, which shows that Mr. Green is clearly right. 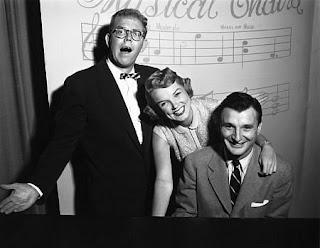 The picture is of O’Connell with Stan Freberg and Bobby Troup.  The IMDB website says the picture is from a 1953 television appearance.
Helen O’Connell passed away in 1993, at 73.
My thanks to Mr. Green for his e-mail.

"Your Hit Parade," on Wikipedia

As part of the Wikipedia entry for Your Hit Parade (http://en.wikipedia.org/wiki/Your_Hit_Parade), there is a photograph (seen below) in which the singer who is pictured is identified as being Dorothy Collins.  The picture's caption says that Collins sang on the Hit Parade with Frank Sinatra in 1947. 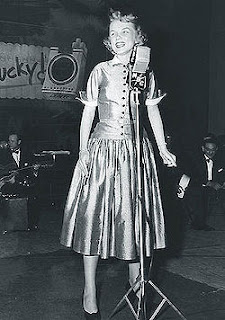 The caption is unfortunately not accurate (Dorothy Collins did not join the program until 1950, the year the show came to television), and the picture itself is not of Collins.  If you click on the picture, on the Wikipedia page, you are taken to another page; a new caption identifies the singer as Doris Day, who did sing on the Hit Parade radio show with Frank Sinatra.  But it certainly doesn't look like Doris Day, either.

Before 1950, the Hit Parade was solely a radio program. For a time, after the show came to television, the radio show continued, and the radio and television programs featured the same casts. (The shows were aired in a semi-simulcast.  The Hit Parade cast performed on the half-hour NBC radio show, Saturday nights at 9 p.m. At 10: 30 p.m., an hour after the radio program ended, the same cast members performed on the TV show.)

If anyone knows who the singer in the photo is, I'd be interested in finding out. Please e-mail me at lspapers@aol.com.

Pictured below:  Hit Parade star Dorothy Collins, on the cover of the New York edition of TV Guide, in August of 1952. 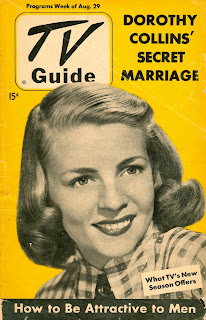 (Postscript:  A reader later wrote to tell me that the Wikipedia photo, above, was of the vocalist Helen O'Connell.)

In October of 1951, Bobby Thomson of The New York Giants hit one of the most dramatic home runs in baseball history.  He passed away on Monday, at 86.

Below is a YouTube video of Thomson's home run. (The audio recording accompanying the film, however, is actually from the radio.  It is the famous call by Russ Hodges, who was announcing the game on New York City radio station WMCA.)

Last August, I spoke about my book, as part of a panel at the annual Mid-Atlantic Nostalgia Convention, in Aberdeen, Maryland.

The convention is now in its fifth year, and will be taking place from September 23 – 25, in a new location—Hunt Valley, Maryland.

One of the actors who will be appearing is Van Williams, who starred in the 1960s television series The Green Hornet.

Martin Grams, Jr., one of the convention’s organizers, is (as previously mentioned in this space) the co-author (with Terry Salomonson) of the recently-published book, The Green Hornet (OTR Publishing).

Grams and Salomonson will be giving a presentation about The Green Hornet, on the second night of this year’s event.
Posted by Andrew Lee Fielding at 8:18 PM

Though this is not a television-related story (aside from the fact that the well-known films Robert Boyle was a part of have been seen on TV for years), I wanted to make note of Mr. Boyle's passing.
From The New York Times:
"Robert F. Boyle, the eminent Hollywood production designer who created some of the most memorable scenes and images in cinematic history — Cary Grant clinging to Mount Rushmore in “North by Northwest,” the bird’s-eye view of the seagull attack in “The Birds,” the colorfully ramshackle shtetl for “Fiddler on the Roof” — died on Sunday in Los Angeles. He was 100."
As part of his work on "North By Northwest" (for which he received an Art Direction/Set Decoration Academy Award nomination), Boyle, notably, worked with director Alfred Hitchcock to design the "crop duster" scene, one of the great scenes in movie history: 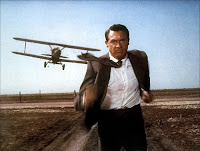 http://www.youtube.com/watch?v=1_dguEsATfI&feature=related
Unfortunately, the above video ends prematurely.  One does not see the scene's conclusion: Cary Grant's character (Roger Thornhill) making off with the truck of one of the bystanders.
Here is the full New York Times obituary for Robert Boyle: