This is an image of the first teletype bulletin from Dallas, Texas, on November 22, 1963.

The bulletin was called into United Press International by the noted UPI reporter Merriman Smith. When he made the call, Smith was in the press "pool" car, in the presidential motorcade.

The car, Smith later wrote, was a "telephone company vehicle equipped with a mobile radio-telephone." He was in the car's front seat, with the telephone company driver, and Malcolm Kilduff, the acting White House Press Secretary for President Kennedy's trip to Texas--and Smith managed to commandeer the phone before any of the three other pool reporters, in the back seat of the car, could do so.

In 1964, Smith would win a Pulitzer Prize for his coverage of the assassination.

Later that day, it was Malcolm Kilduff who made the announcement to the press corps, in a nurses' classroom at Parkland Hospital, that President Kennedy had died.

(Teletype image, from the book Four Days: The Historical Record of the Death of President Kennedy, compiled by United Press International and American Heritage magazine, and published, in 1964, by the American Heritage Publishing Company.)

The last time I wrote about the coronavirus was November 2nd.  On that date, the death count, in America, had reached more than 231,000, and there had been 9 1/4 million COVID cases in the country.

Sixteen days later, an additional 2 1/4 million infections have been diagnosed in the U.S.; the number of cases now exceeds 11 1/2 million. And today, deaths in America, due to the virus, passed a quarter of a million.

Will be saving this paper. 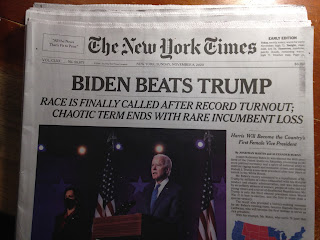 The first is called "Hometown," and is narrated by Bruce Springsteen.  It first aired on television this past weekend, and Mr. Springsteen's "My Hometown" is heard throughout.

The second commercial first aired a couple of weeks ago, and is titled "Go From There."  The narrator is the actor Sam Elliott.

Please note:  The following has been edited, since its posting, to include additional information from a New York Times story which had been cited.

Am hoping for the sea-change, via the election:  that the country will have voted for calm, steady, strong, caring, wise leadership.

One hopes, in short, that the Trump ride will soon be over:  that we'll be done with the President's endless divisiveness, his endless lies, his cruelties, the racial dog whistles, the conspiracy theories, the contempt, the self-pity, the self-glorification. And, of course, there have been his stunning failures regarding COVID--and what has become his disinterest in, dismissal of, minimizing of (and his preference for falsehoods about) the virus.

In a July 19th New York Times story, David Carney, an advisor to Texas Governor Greg Abbott, said this, of Mr. Trump and the pandemic: "The president got bored with it."

Some governors, the article reported, "have sought out partners in the administration other than the president, including Vice President Mike Pence, who, despite echoing Mr. Trump in public, is seen by [such governors] as far more attentive to the continuing disaster."  Mr. Carney, the Times story said, "noted that [Governor] Abbott, a Republican, directs his [COVID-related] requests to Mr. Pence, with whom he speaks two to three times a week."

The President has said, many times, that the country is "rounding the corner," concerning the pandemic. On October 23rd, he added one word to the phrase: "We're rounding the corner beautifully." On that day, in the U.S., there were over 900 deaths, due to the virus.  There were also more than 83,000 new COVID cases that day--a record, at the time, which has since been surpassed.