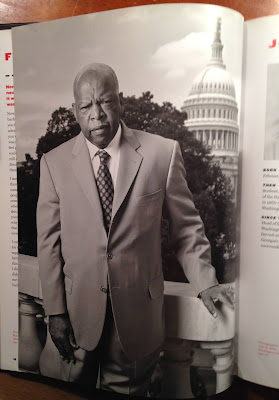 This is a 2007 portrait of Congressman Lewis--a brave, heroic man--who died on Friday, at age 80.

The photograph, by Eric Etheridge, is from Etheridge's 2008 book, Breach of Peace: Portraits of the 1961 Mississippi Freedom Riders (New York: Atlas & Co. Publishers).

The President, and COVID-19

For some time, it is clear, President Trump has been pretty much done with COVID.

On June 17th, he said that the coronavirus was "dying out."

On July 2nd--his impersonal locution, I think, was interesting; it was suggestive, perhaps, of his own remove from the issue--he said: "The crisis is being handled."
Two days later, during a July 4th address, he sought to minimize the virus's severity.  He said that "we have tested over 40 million people. By so doing, we show cases, 99% of which are totally harmless."

My previous post was written June 22nd. At that time, more than 120,000 Americans had died as a result of the virus.

As of today--three weeks later--there have been approximately 15,000 additional American deaths.
Posted by Andrew Lee Fielding at 8:35 PM