This is a link, from YouTube, to one of the most beautiful recordings ever made. It is of Ella Fitzgerald, singing "Someone to Watch Over Me," from the 1950 album Ella Sings Gershwin.

She is accompanied by the wonderful pianist Ellis Larkins.

Mitchell Hadley's "It's About TV"

Here is an enjoyable and interesting post--by Mitchell Hadley, on his "It's About TV" blog" (www.itsabouttv.com)--about the use of guest hosts, years ago, on late-night talk shows, such as Johnny Carson's Tonight Show:

Photograph of a Television Screen, Your Hit Parade, NBC, 1952 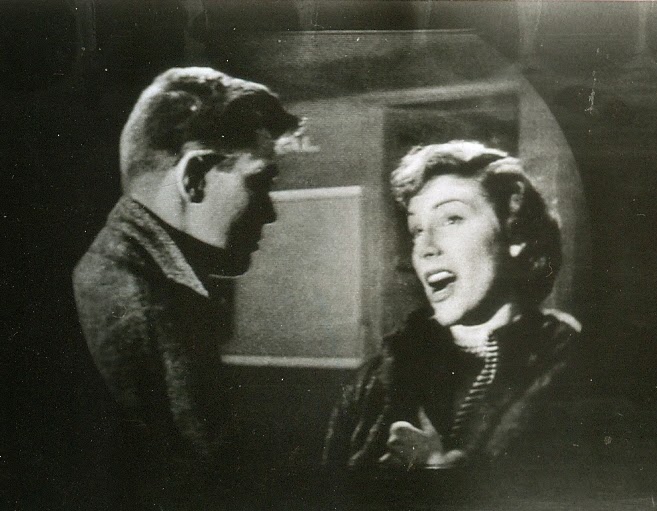 On the Hit Parade television show, the program's featured vocalists routinely sang to other performers, who, while acting with the singers in the program's song dramatizations, remained silent.

Singers from the show's choral group, the "Hit Paraders," were often sung to, as were Hit Parade dancers; outside actors were also hired for this purpose.

The picture, here, is of my mother, Sue Bennett, singing the song "Anytime,"  on the March 29, 1952 telecast of the program. (It was the number two song on the Hit Parade, that week;  the first-place song was "Wheel of Fortune.")  She is singing to Bob Herget, one of the Hit Parade dancers.

The picture is from a group of photos I found in 2012, in my father's apartment.  The pictures are of a television screen/television set, and they show parts of a couple of Hit Parade telecasts, as the programs were in progress.  I do not know who took them.

Bob Herget later became a prominent choreographer, for both television, and Broadway. (He was later, indeed, a choreographer for Your Hit Parade.)

Mr. Herget died in 1981.  Here is his obituary from The New York Times:

Here, as well, is an entry about his career on the Internet Broadway Database (ibdb.com):